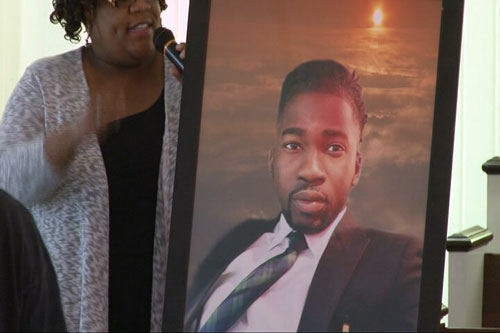 SAVANNAH, Ga. -- A grand jury has indicted three people in the death of a 21-year-old college student whose body was found in restraints at a county jail in Savannah, Ga.

Matthew Ajibade was found dead Jan. 1 strapped to a restraining chair in an isolation cell at the Chatham County Jail. The Savannah College of Art and Design student had been arrested after a fight with his girlfriend. The sheriff's office has said Ajibade fought violently during booking and injured three deputies, one of whom suffered a concussion and a broken nose.

Two of those indicted the death, Maxine Evans and Jason Kenny, are ex-jail employees at the jail and Gregory Brown was a contract health worker.

Indictments returned Wednesday charge all three with involuntary manslaughter. Kenny is also charged with aggravated assault and cruelty to an inmate. Evans and Brown are also charged with public record fraud and Brown faces an additional charge of making a false statement. It's unclear if they have attorneys.

The Georgia Bureau of Investigation was called in to handle the case, and few details were released as to what happened to Ajibade in the jail. On May 8, Sheriff Al St. Lawrence announced that nine deputies had been fired in connection with Ajibade's death. On June 4, attorneys for Ajibade's family released a copy of his death certificate, which showed the coroner had ruled his death a homicide caused by blunt-force trauma.

Dr. Bill Wessinger, the Chatham County coroner, said Ajibade suffered several blows to his head and upper body and some blood was found in his skull case.

"My recollection is none of them by themselves would have necessarily been fatal," Wessinger recently said of the injuries.

Chatham County District Attorney Meg Heap announced weeks ago that she planned to ask a grand jury for indictments in Ajibade's death. The prosecutor's spokeswoman, Kristin Fulford, said Heap did not plan to comment on the indictments.

The case has put an uncomfortable spotlight on St. Lawrence, the 80-year-old sheriff who has held the office since 1992. On one hand, the sheriff has promised changes since Ajibade's death. He fired the deputies deemed responsible, hired consultants to review jail operations and temporarily removed all stun guns from the jail until deputies could be re-trained in their proper use.

"I ain't covering up for nobody. OK?," St. Lawrence told reporters at a June 4 news conference.

At the same time, the sheriff has stood up for his employees who work at the 2,300-bed jail. He said on average 41 deputies are injured each month in scuffles and fights with inmates.

He said the inmates are "not the nicest people in the world, a lot of them," St. Lawrence said. "...I'm not running a summer camp here. I'm running a prison."

Ajibade's family in Hyattsville, Maryland, has hired attorneys including Florida defense lawyer Mark O'Mara, who defended former neighborhood watch volunteer George Zimmerman in the shooting of Trayvon Martin. Attorneys for the family have asked a Savannah judge to disqualify Heap as top prosecutor on the case, arguing she has political reasons to ignore possible criminal charges against the sheriff. Heap dismissed the claims as baseless.

Attorneys for Ajibade's family say he suffered from bipolar disorder and his girlfriend gave police a bottle of his prescription medication when they arrested him. O'Mara has said he suspects Ajibade was having a manic episode at the jail when deputies "beat the (expletive) out of him to get control of him."

Protesters outside the jail told CBS affiliate WTOC a system of failures was responsible for Ajubade's death, and called for the leadership of St. Lawrence's office to be held accountable.

"I'm surprised it didn't go up the list to the rest of the higher-ups in the sheriff's office, because we know that what led to Matthew's death was not only what happened that day to him, but it was basically institutionalized in this jail facility," O'Mara told the station.

We are saddened by the loss of life in the Matthew Ajibade case and continue to work diligently with the District Attorney to ensure justice is served. As is our procedure in all in-custody deaths, CCSO requested GBI assistance in this investigation and cooperated fully in all aspects. We appreciate all of the work the Grand Jury and District Attorney on this case and are confident in the legal process.