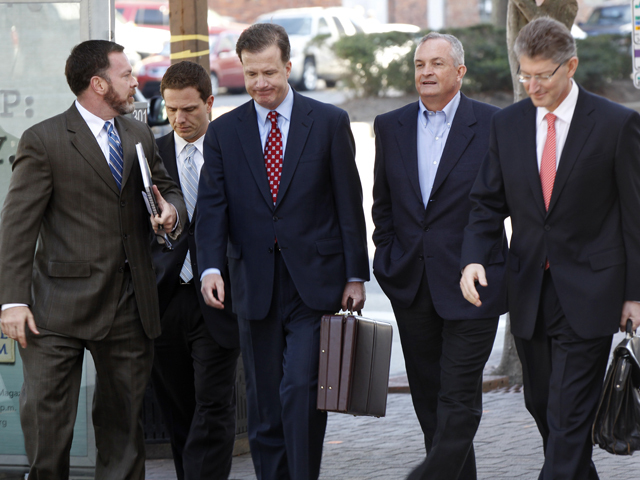 NEW ORLEANS Two BP rig supervisors and a former BP executive pleaded not guilty Wednesday to criminal charges stemming from the deadly Deepwater Horizon rig explosion and the company's response to the massive 2010 spill in the Gulf of Mexico.

Kaluza and Vidrine are charged with manslaughter in the deaths of 11 rig workers. They are accused of disregarding abnormally high pressure readings that should have been glaring indications of trouble just before the blowout of BP's Macondo well.

Rainey was charged separately with concealing information from Congress about the amount of oil that was leaking from the well. Millions of gallons of crude oil spewed from BP's well for months.

"I'm angry that the two middle-management guys are going to take the fall," Stephen Stone, a worker on the Deepwater Horizon who escaped on a lifeboat, told CBS News. He's haunted by memories of fellow workers -- some injured, others jumping 60 feet into the Gulf.

Kaluza professed his innocence on his way into court, making his first public comments since the April 2010 explosion that killed his co-workers.

"I think about the tragedy of the Deepwater Horizon every day," Kaluza told reporters just before his arraignment. "But I did not cause this tragedy. I am innocent and I put my trust, reputation and future in the hands of the judge and the jury."

Kaluza and Vidrine's lawyers both accused the Justice Department of using their clients as scapegoats. They noted that other government investigations have spread out the blame for the disaster and concluded it was the product of a complex series of mistakes, made both onshore and on the rig.

"Bob and Don did their jobs," said Shaun Clarke, one of Kaluza's attorneys. "They did them correctly and they did them in accordance with their training."

Robert Habans, one of Vidrine's lawyers, said his client diligently followed instructions he received from engineers and others onshore.

"He's not the architect or the engineer. He didn't design the well, and he didn't make the critical decisions in this case," Habans said.

The case against Kaluza and Vidrine centers on their roles in supervising "negative testing," which is designed to assess whether a cement barrier is effectively preventing oil or gas from flowing up the well. The indictment says they had "multiple indications" from the negative testing that the well wasn't secure. Yet they allegedly failed to alert onshore engineers about the problems during the testing, accepted a "nonsensical explanation" for abnormal pressure readings and eventually decided to stop investigating.

Habans, however, said court records related to civil litigation over the spill indicates Vidrine did discuss the test results with an onshore engineer less than an hour before the blast. A Justice Department attorney questioned a BP expert about the phone conversation between Vidrine and the engineer, Mark Hafle.

"It's almost inconceivable to me that the government in the indictment makes a contrary allegation," Habans said.

A trial for Kaluza and Vidrine is scheduled to start on Feb. 4, while Rainey has a Jan. 28 trial date. Both dates could be postponed given the complexity of the cases.

BP announced earlier this month that it will plead guilty to manslaughter, obstruction of Congress and other charges and pay a record $4.5 billion in penalties to resolve a Justice Department probe of the disaster.

Attorneys for BP and the Justice Department are scheduled to meet Dec. 11 with a federal judge to discuss a date for the company to plead guilty.

The Deepwater Horizon oil rig, owned by Transocean Ltd. but operated on behalf of BP, was drilling in the Gulf of Mexico off the Louisiana coast on April 20, 2010, when it was rocked by an explosion. The bodies of 11 workers were never recovered.

Stone believes the two rig supervisors should be prosecuted, but he also thinks BP's senior leaders have got away scot-free.

"'We'll send these guys to jail while we're sitting here collecting our cash and laughing all the way to the bank,'" Stone told CBS News. "Until those guys realize that when they do this stuff, they could actually go from sleeping in silk sheets to sleeping in a jail cell, it's not gonna change."