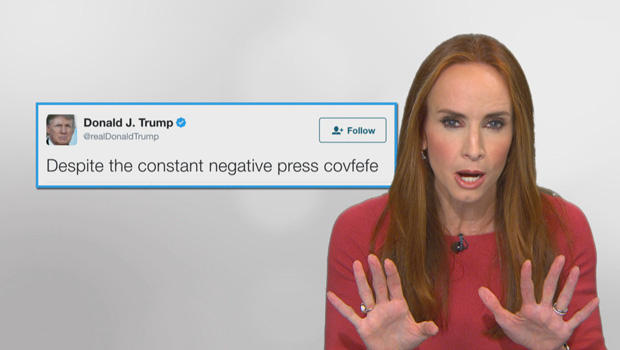 We're into December, which means all kinds of folks are pronouncing their nominations for "Word of the Year."  And in a nod to Dictionary.com's just-revealed choice, you could say our Faith Salie is "complicit":

But there is one word that trumps all others. You guessed it: according to the Oxford University Press, use of the word "Trump" has increased 839 percent. They analyzed over 100,000 short stories written by British children for a competition, and have already declared "Trump" to be the Children's Word of this Year.

From those kids' imaginations emerged such characters as Boggle Trump, Snozzle Trump, and Trumplestilskin.

It bears noting that recent past Words of the Year were not so overtly political: The American Dialect Society gave us "Dumpster fire" last year.

Remember when "tweet" described a sweet new technology, rather than a weapon of mass destruction aimed at "Rocket Man"?

These are totally political times. Politics has shoved pop culture aside -- politics is pop culture.

It seems nowadays that new words divide, diminish, provoke. Words are leading not to understanding, but entrenchment.

As for this year's word, we know for sure what it won't be. It won't be Namaste, which people like to say at the end of yoga class to mean, "I bow to you."