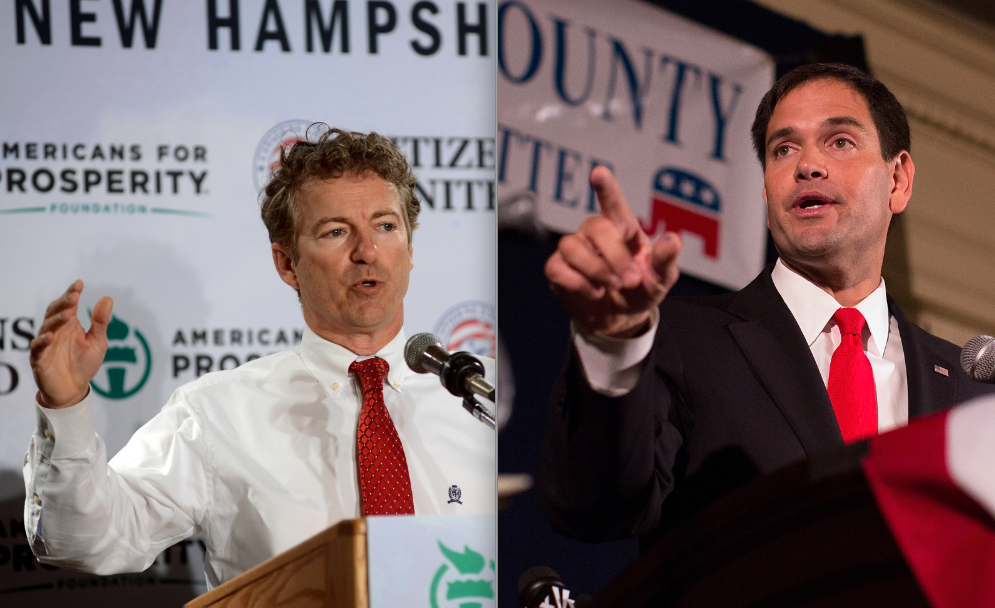 As the Republican Party's slate of potential 2016 presidential candidates begin positioning themselves for a run, they're confronting a question that has bedeviled the GOP in recent national elections: Do they rouse the base to score big in the primary, or do they look ahead to the general election and speak to swing voters?

Their answers, thus far, are all over the map.

Some, like Sen. Marco Rubio, R-Fla., are throwing nothing but red meat. In an interview broadcast Sunday on ABC, Rubio talked tough about the attack Benghazi, saying nobody in President Obama's administration has been held accountable. He said Hillary Clinton would get a failing grade on her record as secretary of state, and he rejected the "notion" that human activity is causing climate change.

He also downplayed his work on immigration reform, an issue that opened a rift between him and the conservative base after he voted for a comprehensive reform bill last June. He said he still believes the system needs to be overhauled but added that it's "not at the forefront" of the issues facing America today.

Gov. Bobby Jindal, R-La., was similarly preaching to the faithful this weekend with a commencement speech on Saturday at Liberty University, an evangelical Christian college.

Jindal warned the graduates that religious liberty was under attack from an increasingly secular American culture, and that conservative Christians must be prepared to stand tall for their beliefs. He singled out the requirement for insurance companies to provide contraceptive coverage under Obamacare as a particularly egregious example of the government's "silent war" on religion.

Some candidates, though, struck a more balanced tone, reaching out to the middle with one hand as they fanned enthusiasm among the base with the other. Former Sen. Rick Santorum, R-Pa., had harsh words for the Obama administration on Benghazi and Obamacare during an interview Sunday on CNN, but he also said Republicans need to do a better job of projecting compassion on economic issues.

Santorum, who sought the GOP nomination in 2012, said the GOP's opposition to raising the minimum wage hurt their standing among blue collar voters and suggested his party needs an "image makeover."

"I'm looking for candidates who connect with average voters, someone who has a heart and understanding for the difficult times that those voters are going through," he said.

Other Republicans, particularly those with an already-strong reputation among conservative activists, have been more willing to break from the party line and emphasize issues that could appeal to crossover voters.

Sen. Rand Paul, R-Ky., for example, is a favorite of the tea party who has also said Republicans need to do a better job of winning converts. He's emphasized his opposition to government surveillance to court young voters, and he's reached out to minorities by preaching criminal justice reform.

And on Friday, in perhaps his highest-profile break with his party yet, Paul said the GOP-led push for voter ID laws is "offending" people the party needs to win over. Civil rights organizations have said the laws are disproportionately targeting urban and minority voters that traditionally lean toward Democrats.

"Everybody's gone completely crazy on this voter ID thing," Paul told the New York Times. "I think it's wrong for Republicans to go too crazy on this issue because it's offending people."

Whoever ends up with the GOP nod can be sure the Democrats won't cede their 8-year hold on the White House without a fight. During a fundraising speech in South Carolina on Friday, Vice President Joe Biden riled up the crowd with a fiery dose of populism, several people in the room told CNN.

"He gave a stem-winding, almost revival-type speech today," one attendee said. "I have never seen him this good. He was on fire."

Another said Biden "talked about how the system was rigged against the middle class," delivering a message that would fit nicely into any stump speech.

And Hillary Clinton -- the woman on everyone's mind, Democrat and Republican alike -- made a splash this weekend with the first excerpt from her hotly-anticipated upcoming memoir, which was obtained by Vogue Magazine.

The excerpt, published on Mother's Day, offered no talk of politics or 2016, but it did showcase a more intimate look at Clinton's experience as a mother, daughter, and soon-to-be grandmother.