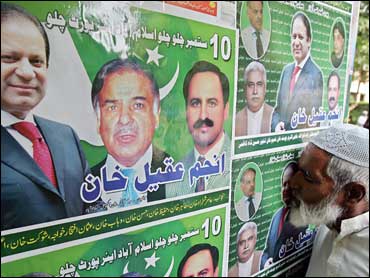 The Pakistani government detained at least two thousand opposition activists in a three-day crackdown as former prime minister Nawaz Sharif planned to leave his life in exile and return home on Monday, in clear defiance of General Pervez Musharraf, the pro-U.S. military ruler.

Mr. Sharif's return, almost eight years after General Musharraf seized power in a bloodless coup and exiled him to Saudi Arabia, is about to happen in spite of a call from the Saudi government, urging him to stay outside the country.

At the root of Sharif's apparent dispute with the Saudis lies an agreement he signed just before leaving the country in 2000. Saudi officials say the former Pakistani prime minister promised to stay away from the country for ten years and return no sooner than 2010.

But Sharif has received an unexpected political lift when the Pakistani Supreme Court ruled in August that he had an "inalienable right" to return to his country. "I am going to lead the people of Pakistan against the dictatorship, and the dictator sitting in Islamabad should give up his futile efforts to stop me," said Sharif defiantly on Saturday at a press conference in London.

"I will go back to Pakistan on September 10 with my brother (Shahbaz Sharif) because my country needs me," he added.

Shahbaz Sharif is Nawaz Sharif's younger brother and his closest political confidante. The younger Sharif served as chief minister of the province of Punjab, Pakistan's largest and politically most important region, while his elder brother served as the prime minister.

Ahead of his return, opposition leaders from Sharif's Pakistan Muslim League - Nawaz (PML-N) political party claimed, at least two thousand of their supporters had been arrested by the Pakistani police in different parts of the country. The arrests were made apparently to prevent the PML-N from demonstrating a strong show of force around Islamabad's international airport when Sharif arrives on Monday noon in a Gulf Air flight from London via Muscat, Oman.

"These security measures will not deter us from going to the airport. We will still go to receive our leader" said Siddique-ul-Farooq, a PML-N leader in an interview with CBS News. "The government has no business keeping Mr. Nawaz Sharif out of Pakistan."

On Saturday, a Saudi envoy accompanied by a Lebanese lawmaker publicly urged Sharif to remain out of Pakistan - an unusual step for the oil rich desert kingdom ruled by a conservative monarchy that is known to exercise strong internal controls against any dissent.

At a news conference in Islamabad with Saad Hariri, a Lebanese lawmaker and son of Lebanon's slain prime minister Rafiq Hariri, Saudi intelligence chief Prince Muqrin bin Abdul Aziz al Saud left no uncertainty over a clear message from the Saudi regime: "We are sincerely hoping that his excellency Nawaz Sharif honors that agreement (which saw him go to exile in Saudi Arabia."

An Arab diplomat in Islamabad who spoke to CBS News on the condition of anonymity said the Saudis were keen to keep Sharif out of Pakistan, as his return "will undoubtedly create more internal uncertainty and maybe even chaos." The Arab diplomat said there was a possibility of Sharif being sent back to exile to Saudi Arabia on Monday, though Sharif's party leaders warned that such an action will be a violation of the Pakistani supreme court's verdict.

Musharraf has been a close ally of U.S. President George W. Bush since Pakistan was forced to abandon its support of Afghanistan's Taliban regime and join the U.S.-led war on terror. He has seen generous U.S. economic and military assistance flow to Pakistan since the 9/11 attacks.

But Musharraf has battled fast mounting uncertainty recently since he unsuccessfully tried to sack Iftikhar Mohammad Chaudhary, chief justice of the Supreme Court, in March this year. Chaudhary was suspended on March 9 on vague charges of misconduct but was restored back to his position in a Supreme Court verdict in July which ruled against the General.

Musharraf also faces increasing calls from Pakistan's opposition parties to step down. Lately, he has negotiated a new power sharing agreement with Benazir Bhutto, another former prime minister, in the hope of consolidating his beleaguered government.

But so far there has been no agreement with Bhutto, who also lives in exile and has promised to announce her return. Analysts warn Bhutto's agreement without an alliance with Musharraf will only further solidify opposition to the government.

On Sunday, Human Rights Watch (HRW), the U.S.-based watchdog group, added its voice to the criticism against Musharraf. In a statement it said; "The government should release arbitrarily detained opposition activists immediately and allow them to peacefully welcome Nawaz Sharif freely and without threat of violence."

However, senior government officials warned, they had put all of Pakistan's key airports on a state of red alert after receiving non-specific intelligence information that warned against terrorist attacks. Last week, at least 25 people were killed in two suicide attacks in Rawalpindi, the military's main garrison town outside Islamabad, the Pakistani capital.

One of the attacks was aimed at a bus carrying junior employees of the Inter Services Intelligence (ISI) - Pakistan's elite security agency. The attack at the ISI bus has been described by western diplomats as the consequence of a major intelligence failure.