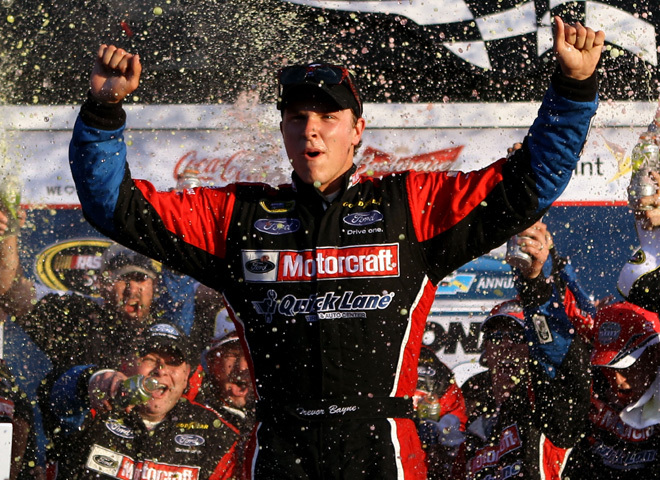 (AP) DAYTONA BEACH, Fla. - Trevor Bayne finally made a mistake. Fortunately for him, it didn't happen until he missed the turn pulling into Victory Lane at the Daytona 500.

The youngest driver to win the Great American Race gave the historic Wood Brothers team its fifth Daytona 500 victory — its first since 1976 with David Pearson — and Bayne did it in a No. 21 Ford that was retrofitted to resemble Pearson's famed ride.

"Our first 500, are you kidding me?" said Bayne, who needed directions to Victory Lane. "Wow. This is unbelievable."

Just one day after celebrating his 20th birthday and leaving his teenage years behind, the aw-shucks Tennessean who shaves once a week and considers "Rugrats" his favorite TV show captured the sport's biggest race.

When he found himself at the front, and victory just two laps away, he never thought it would last. Bayne was content just to say he had been leading at the start of the green-white-checkered.

"I'm a little bit worried that one of them is going to come after me tonight," he said. "I'm going to have to sleep with one eye open. That's why I said I felt a little undeserving. I'm leading, and I'm saying, 'Who can I push?"'

Bayne thought for sure Tony Stewart or someone else would attempt to pass.

"We get to turn four, and we were still leading the band," he said. "It seemed a little bit too easy there at the end."

The rookie had been great throughout Speedweeks, even proving his mettle by pushing four-time champion Jeff Gordon for most of a qualifying race, a performance Bayne said convinced the veterans he could be trusted on the track.

"I figured they had a chance after seeing that boy race in the 150s," said Pearson, who will be inducted into the Hall of Fame in May. "I talked to him this morning. I told him to keep his head straight and not to do anything crazy. I told him to stay relaxed. I'm proud of him."

"I think it's very cool. Trevor's a good kid, and I love the Wood Brothers," Gordon said. "I'm really happy for him. And I think it's great for the sport. To have a young talent like that — he's got that spark, you know?"

The victory for NASCAR pioneers Leonard and Glen Wood ended a 10-year-losing streak and came the week of the 10th anniversary of Dale Earnhardt's fatal accident on the last lap of the 2001 Daytona 500.

This was only the fourth win in the last 20 years for Wood Brothers — NASCAR's oldest team — which hasn't run a full Sprint Cup season since 2006 and hit the low point of their 61-year-old existence when they failed to qualify for the 2008 Daytona 500.

"When you miss a race, like the Daytona 500, it's like somebody died," said Eddie Wood, part of the second generation of Woods now running the team. "When you walk through the garage and you run into people you see every week, they don't look at you, they don't know what to say."

The rebuild has been slow, and they got Bayne this year for 17 races, on loaner from Roush-Fenway Racing, the team that snatched him up late last season when Michael Waltrip Racing — which gave Bayne his start in 2009 — couldn't promise a sponsor for this season.

So it was on to Roush, which plans for Bayne to run for the Nationwide Series title this season, and a deal was made to get him some seat time in the Cup Series with the Woods. It wouldn't be for points, and he wasn't eligible to run for rookie of the year.

But the stunning Daytona 500 win — and the $1,462,563 payday — might change everybody's plans. The team already said it will now go to Martinsville, the sixth race of the season, which had not been on its original schedule.

Bayne could possibly retract his decision to run for the Nationwide title.

"I don't even know if that's an option," Bayne said.

Sunday's race had a record 74 lead changes among 22 drivers, and a record 16 cautions that wiped out many of the leaders, including Earnhardt Jr. on the first attempt at NASCAR's version of overtime. It put Bayne out front with a slew of unusual suspects.

David Ragan, winless in 147 career starts, was actually leading the field on NASCAR's first attempt at a green-white-checkered finish. But he was flagged for changing lanes before the starting line, then an accident that collected Earnhardt in the middle of the pack brought out the caution, and Bayne inherited the lead.

But he had two-time series champion Stewart, now winless in 13 career Daytona 500s, lurking behind with veterans Bobby Labonte, Mark Martin and Kurt Busch, who had collected two previous wins over Speedweeks. All were chomping at the bit for their first Daytona 500 title, but Bayne never blinked, holding his gas pedal down wide open as he staved off every challenge over the two-lap final shootout.

"It was too easy," Bayne said.

He said he thought for sure he was going to brake, let Stewart in front of him, and push someone else to the win.

Then nobody ever passed him.

Edwards wound up second in a Ford and seemed genuinely happy for Bayne.

"Second place in the Daytona 500 feels way worse than any other position I've ever finished in the Daytona 500," Edwards said. "But that is made better by listening to Trevor and how excited he is. He is really a nice young man, a great guy to represent this sport with this win.

"I think the world's going to like him a lot."

David Gilliland finished third and was followed by Labonte and Busch. Juan Pablo Montoya was sixth, Regan Smith seventh, and Kyle Busch, Paul Menard and Martin rounded out the top 10.

Earnhardt Jr. wound up 24th. It was a rough start to the season for Hendrick Motorsports as three of the team's four cars, including five-time defending Sprint Cup Series champion Jimmie Johnson, were involved in an early 14-car wreck.