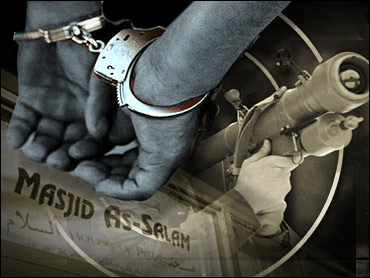 Two leaders of a mosque in Albany, N.Y., were arrested on charges stemming from an alleged plot to help a man they thought was a terrorist purchase a shoulder-fired missile, federal authorities said Thursday.

The men have ties to a group called Ansar al-Islam, which has been linked to the al Qaeda terror network, according to two federal law enforcement authorities speaking on condition of anonymity.

U.S. officials have said that Ansar's members are thought to be linked to Abu Musab al-Zarqawi, the Jordanian militant whose network is blamed for attacks on U.S. forces and their allies in Iraq.

The two arrests, first reported by CBS News, came as FBI, Immigration and Customs Enforcement and other agents executed search warrants at the Masjid As-Salam mosque and two residences in the Albany area, about 130 miles north of New York City, late Wednesday and early Thursday, officials said. The arrested men were identified as Yassin Aref, 34, the imam of the mosque, and 49-year-old Mohammed Hoosain, one of the mosque's founders.

According to law enforcement officials, the two are being charged with providing material support to terrorism by participating in a conspiracy to help an individual they believed was a terrorist purchase a shoulder-fired missile.

The individual was in fact working undercover for the government and no missile ever changed hands. Aref and Hoosain were allegedly involved in money-laundering aspects of the plot, the officials said.

The investigation has been going on for a year and is not related to the Bush administration's decision earlier this week to raise the terror alert level for certain financial sector buildings in New York and Washington, the officials said.

More details about the case were expected to be released later Thursday by the Justice Department in Washington.

Some mosque members held morning prayers Thursday on a nearby sidewalk and voiced anger over the arrests.

"This, we believe, is an act of … bias and stereotyping - an undo scrutiny of the Muslim community," Faisal Ahmad, a worshipper at the mosque, tells CBS Radio News. "It is certainly difficult on the Muslim community to have these type of investigations, especially in the middle of the night, and to come and find their house of worship closed for prayers.

"Unscheduled visits in the middle of the night are really difficult for the Muslim community and create a lot of fear."

Concerns about terrorists using shoulder-fired missiles to take down commercial airliners were heightened in November 2002 when two SA-7 missiles narrowly missed an Israeli passenger jet as it took off from Mombasa, Kenya. It's believed al Qaeda probably was behind the attack, which coincided with a bomb blast at a nearby hotel.

Last November, a shoulder-fired missile struck a DHL cargo plane at Baghdad International Airport, forcing it to make an emergency landing at the airport with its wing aflame.

The Homeland Security Department has contracted with three companies to develop plans for anti-missile systems that could be used to defend U.S. commercial planes against shoulder-fired rockets.

It's estimated that it would cost about $1 million per plane to install anti-missile systems. There are about 6,800 planes in the U.S. commercial fleet.

The Bush administration has been reluctant to pursue the technology, citing the cost and noting that other security measures adopted since the Sept. 11 attacks have diminished the threat against aircraft.

Last August, three men accused in a plot to smuggle shoulder-fired missiles that could shoot down a commercial airliner were arrested in New York and New Jersey after an international sting operation.

In the sting, the men allegedly tried to sell a dummy Russian-made SA-18 Igla missile to undercover agents posing as terrorists.

Although weapons experts say the Igla is the most sophisticated, accurate and difficult-to-obtain portable rocket, there are other choices for terrorists, including hundreds of American-made Stinger shoulder-fired missiles the United States sold to Afghanistan in the 1980s.

There are also thousands of a class of missile known in the West as the SA-7 Grail and in Russia as the Strela, or Arrow, which have been produced in Russia, Eastern Europe, China, the former Yugoslavia, Egypt and other countries. Some have sold for as little as $500, according to U.S. intelligence.

They tend to weigh just 35 to 40 pounds, and their 5-foot tubes are compact enough to be easily concealed in a large duffel bag.

Although their performance varies depending on the type, the missiles tend to have a minimum range of 600 yards and a maximum of roughly 3 miles, and can hit airborne targets ranging from 50 feet to 10,000 feet.