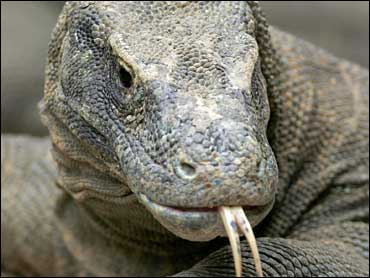 Two Komodo dragons mauled a fruit-picker to death in eastern Indonesia, police and witnesses said Tuesday, the latest in a string of attacks on humans by the world's largest lizard species.

Police Sgt. Kosmas Jalang said 31-year-old Muhamad Anwar was attacked on Komodo, one of four islands where the giant reptile is found in the wild, minutes after he fell out of a sugar-apple tree on Monday.

He was bleeding badly from bites to his hands, body, legs and neck after two lizards, waiting below, attacked him, according to a neighbor, Theresia Tawa. He died at a clinic on the neighboring island of Flores soon after.

Attacks on humans by Komodo dragons - said to number at less than 4,000 in the wild - are rare, but seem to have increased in recent years.

An 8-year-old boy was killed in 2007 - the first recorded deadly attack on a human by one of the endangered lizards in three decades. A park ranger narrowly survived after one of the animals entered his hut last month and started biting his hands and legs.

There have been several other attacks in recent months, according to Metro TV.

The reptiles, which can grow up to 10 feet long and weigh as much as 150 pounds, have shark-like serrated teeth and a bite that can be deadly. Its saliva contains roughly 50 different known bacteria strains, so infection is a risk.

Komodos can be found in the wild on the Indonesian islands of Komodo, Padar and Rinca. Tiny numbers also can be found on Flores.