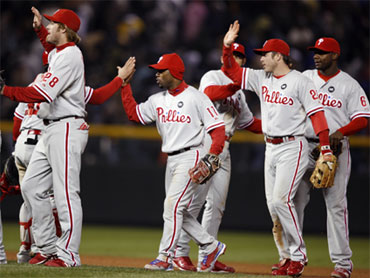 An American photographer and a British reporter on assignment for the Los Angeles Times were kidnapped, Colombian rebels said, but three other foreigners believed abducted were freed late Thursday.

Scott Dalton, a native of Conroe, Texas; and Ruth Morris, a British national, have been "retained" by the National Liberation Army, or ELN, the guerrilla group said in a statement Thursday on a clandestine rebel radio station.

The two were seized Tuesday at a rebel roadblock in Arauca state, one of the most violent regions of Colombia. They were led away from their taxi with hoods on their heads, but had been told they were being taken for an encounter with a rebel commander, their driver, Madiel Ariza, told The Associated Press.

The three planned on spending the night in Unguia, 500 kilometers northwest of Bogota, Catholic Bishop German Garcia told the station.

They were reportedly been seized by the right-wing United Self-Defense Forces of Colombia on Sunday. Pelton gained worldwide attention with an interview of American Taliban suspect John Walker Lindh while covering the war in Afghanistan for CNN.

Ariza said the rebels told him to leave their encampment the following day, and that the ELN would turn over the journalists to the Red Cross within a day or two. But the ELN statement said the journalists were being held.

"In due time, they will be freed, when the political and military conditions permit," the statement said. "The situation is very fluid, and our primary concern is for Ruth and Scott's safety," the Los Angeles Times said in a statement.

The kidnapping comes as the United States is beefing up military aid to the Colombian government, which has been battling the ELN and a larger rebel group for 38 years.

Last week, dozens of U.S. special forces trainers arrived in Arauca to train Colombian troops to battle the guerrillas. The Colombian soldiers will be tasked with protecting an oil pipeline in Arauca that has been sabotaged by the rebels numerous times.

The kidnapping occurred on a road south of the Colombian town of Saravena, 205 miles northeast of Bogota. Several dozen of the U.S. special forces are to be stationed at an army base in Saravena, located near the Venezuelan border.

The ELN statement said the two journalists had arrived in the guerrilla stronghold without their permission.

"You must take into account that Arauca state has been declared a war zone by the American government and the Colombian state," the rebel statement said. "For that reason, the National Liberation Army is on a war footing and is (acting) in the defense of the dignity of all the people of eastern Colombia."

The ELN said they were "prepared to guarantee the lives and security of these journalists," and did not issue any demands for their release.

The U.S. Embassy in Bogota said it was following the situation.

"We are concerned about the individuals who have been reported missing," an embassy spokesman said. "We continue to monitor the situation closely with the Colombian government and State Department in Washington to obtain the most accurate information."

Both Dalton and Morris live in Bogota, the Colombian capital.

Dalton, 34, is a freelance photographer. He had been a photographer for the AP for about nine years, based in Panama, Guatemala and then Colombia, until the summer of 2002. He left to pursue video projects while freelancing for Bloomberg News, The New York Times, The Miami Herald and other media.

Morris has written articles as a freelancer for the Los Angeles Times, Time magazine, the Sun-Sentinel in south Florida and other publications. She previously was a staff writer for Dow Jones Newswires in Bogota.

The kidnapping came as a delegation of the Inter American Press Association was visiting Colombia to urge the government of President Alvaro Uribe to protect journalists operating in this South American country and punish those who kill and kidnap them.

Colombia is one of the most dangerous countries to work in, but local journalists have been the ones usually targeted.