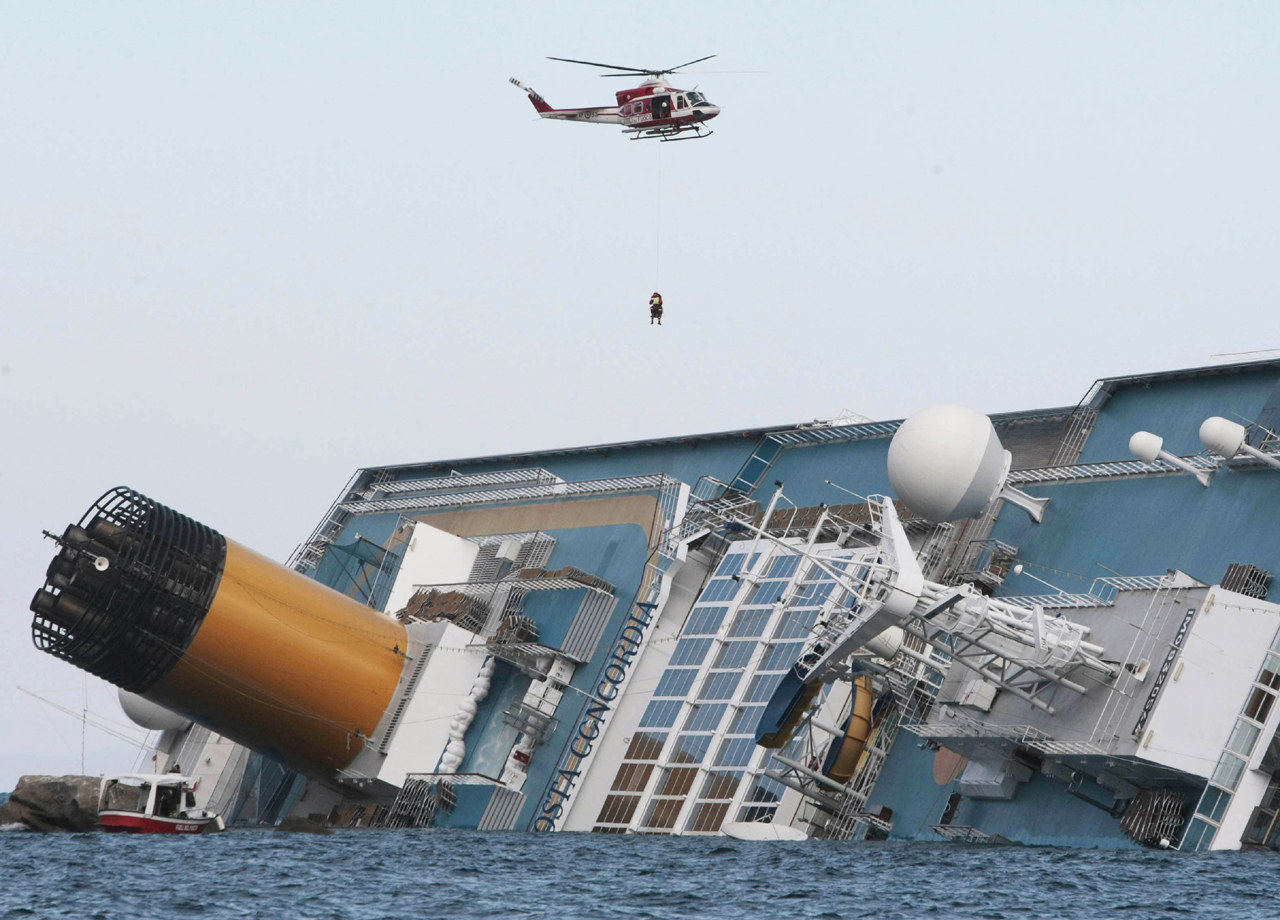 GIGLIO, Italy (AP) — Coast guard divers searching the submerged part of the Costa Concordia on Sunday found the bodies of two elderly people still in their life jackets, authorities said, raising to five the death toll after the luxury cruise liner ran aground and tipped over off the Tuscan coast.

Divers scouring the bowels of the ship in the murky, cold sea discovered the bodies at the emergency gathering point near the restaurant where passengers were dining when the ship carrying more than 4,200 people hit a reef or rock near the island of Giglio, Coast Guard Cmdr. Cosimo Nicastro said.

The discovery reduced to 15 the number of people still unaccounted for after an Italian who worked in cabin service was pulled from the wreckage Sunday and a South Korean couple on their honeymoon were rescued late Saturday in the unsubmerged part of the liner when a team of rescuers heard their screams.

"We are still searching" for any bodies, "but (also) in the hope that there might have been an air pocket" to allow the survival of others, Nicastro told Sky TG24 TV dockside.

Authorities are holding the Italian captain for investigation of suspected manslaughter and abandoning his ship among other possible charges. According to the Italian navigation code, a captain who abandons a ship in danger can face up to 12 years in prison.

The ship's chaotic and panicked evacuation has added to the difficulty in tracking down survivors — with six of those unaccounted for crew members and the others passengers. Two of the unaccounted for passengers are American, the U.S. Embassy in Rome said.

In the first hours after the accident late Friday night, three bodies were found in the waters near the ship. The victims discovered Sunday were two elderly men who were wearing life vests, said Coast Guard Cmdr. Francesco Paolillo.

"The divers had to remove the life vests to get the bodies out," he said, because they could have floated away. Their nationalities were not immediately released.

The divers' search through the ship, which is lying on its side with a huge gash in one side, was already dangerous because of the risk the vessel could suddenly move and sink into waters over a nearby lower sea bed.

But, the divers' safety was increasingly threatened by floating objects in the belly of the nearly 1,000-foot-long liner, as well as muck drastically reducing visibility, Nicastro said.

"There are tents, mattresses, other objects moving which can get tangled in the divers' equipment," Nicastro said. Officials were going to huddle soon to see how long the underwater search could safely continue, he said.

Divers say they are using a kind of long cord they hook near the point of entrance and unroll as they work, so they can find their way out when finished.

Prosecutor Francesco Verusio has confirmed reports that prosecutors are investigating allegations that liner's captain, Francesco Schettino, abandoned the stricken liner before all the passengers had escaped.

Asked Sunday by Sky TG24 about the accusations, Grosseto prosecutor Francesco Verusio replied, "unfortunately, I must confirm that circumstance."

A French couple who boarded the Concordia in Marseille, Ophelie Gondelle and David Du Pays of Marseille, told The Associated Press they saw the captain in a lifeboat, covered by a blanket, well before all the passengers were off the ship. They insisted on telling a reporter what they saw, so incensed that — according to them — the captain had abandoned the ship before everyone had been evacuated.

"The commander left before and was on the dock before everyone was off," said Gondelle, 28, a French military officer.

"Normally the commander should leave at the end," said Du Pays, a police officer who said he helped an injured passenger to a rescue boat. "I did what I could."

Schettino has said the ship hit rocks that weren't marked on his nautical charts, and that he did all that he could to save lives.

"We were navigating approximately 300 meters (yards) from the rocks," he told Mediaset television. "There shouldn't have been such a rock."

He insisted he didn't leave the liner before all passengers were off, saying "we were the last ones to leave the ship."

But that clearly wasn't the case as the finding of the three survivors aboard Saturday night and Sunday showed.

Coast guard spokesman Capt. Filippo Marini told Sky Italia TV that Coast Guard divers have recovered the so-called "black box" with the recording of the navigational details from a compartment now under water.

A Dutch firm has been called in to help extract the fuel from the Concordia's tanks before any leaks into the area's pristine waters, Rossi, the regional president, said. No leaks have so far been reported.

While ship owner Costa has insisted it was following the same route it takes every week between the Italian ports of Civitavecchia and Savona, residents on the island of Giglio said they had never seen the Costa come so close to the Le Scole reefs and rocks that jut out off Giglio's eastern side.

"This was too close, too close," said Italo Arienti, a 54-year-old sailor who has worked on the Maregigilo ferry service that runs between the island and the mainland for more than a decade. A now-retired Costa commander used to occasionally do "fly-bys" on the route, nearing a bit and sounding the siren in a special salute for his hometown, he said.

Such a fly-by was staged last August, but there was no incident, he said.

He said the cruise ship always stayed more than five to six nautical miles offshore, well beyond the reach of the "Le Scole" reefs, popular with scuba divers.

The terrifying escape from the luxury liner, which was on a week-long Mediterranean cruise, was straight out of a scene from "Titanic." Many passengers complained the crew didn't give them good directions on how to evacuate and once the emergency became clear, delayed lowering the lifeboats until the ship was listing too heavily for many to be released.

Several other passengers said crew members told passengers for 45 minutes that there was a simple "technical problem" that had caused the lights to go off.

Amateur footage taken aboard the ship showed the situation immediately after it ran aground, as an announcement in various languages tells passengers the liner is having electrical problems and "the situation is under control." When a man asks a crew member in Spanish why he is wearing a life vest, the crew member continues on his way.

Other video shows people crowded together in life jackets, apparently calm and waiting to disembark the ship. A third video taken from a lifeboat, shows mostly darkness as people shout and scream in panic.

Passengers said they had never participated in an evacuation drill, although one had been scheduled for Saturday. The cruise began on Jan. 7.

Costa Crociera SpA, which is owned by the U.S.-based cruise giant Carnival Corp., defended the actions of its crew and said it was cooperating with the investigation. Carnival Corp. issued a statement expressing sympathy that didn't address the allegations of delayed evacuation.

Some 300 of the crew members were Filipinos and three of them were injured, the Philippine Department of Foreign Affairs said.

The captain has insisted that the reef was not marked, but locals said that the stretch of sea is not difficult to maneuver. Anello Fiorentino, captain of a ferry that runs between Giglio and the mainland, said he makes the crossing every day without encountering problems.

"Yes, if you get near the coast there are reefs, but this is a stretch of sea where all the ships can safely pass," he said.

Islanders on Giglio opened up their homes and businesses to accommodate the sudden rush of survivors. Rossana Bafigi, who runs a newsstand, said she was really moved by the reaction of the passengers.

She showed a note left by one Italian family that said, "We want to repay you for the disturbance. Please call us, we took milk and biscuits for the children. Claudia."

At Mass on Sunday morning in Giglio's main church, which opened its doors to the evacuees Friday night, altar boys and girls brought up to the altar a life vest, a rope, a rescue helmet, a plastic tarp and some bread.

Don Lorenzo, the parish priest, told the faithful that he wanted to make this admittedly "different" offering to God as a memory of what had transpired.

He said each one carried powerful symbolic meaning for what happened on Friday night: the bread that multiplied to feed the survivors, the rope that pulled people to safety, the life vest and helmet that protected them, and the plastic tarp that kept cold bodies warm. "Our community, our island will never be the same," he told the few dozen islanders gathered for Mass.