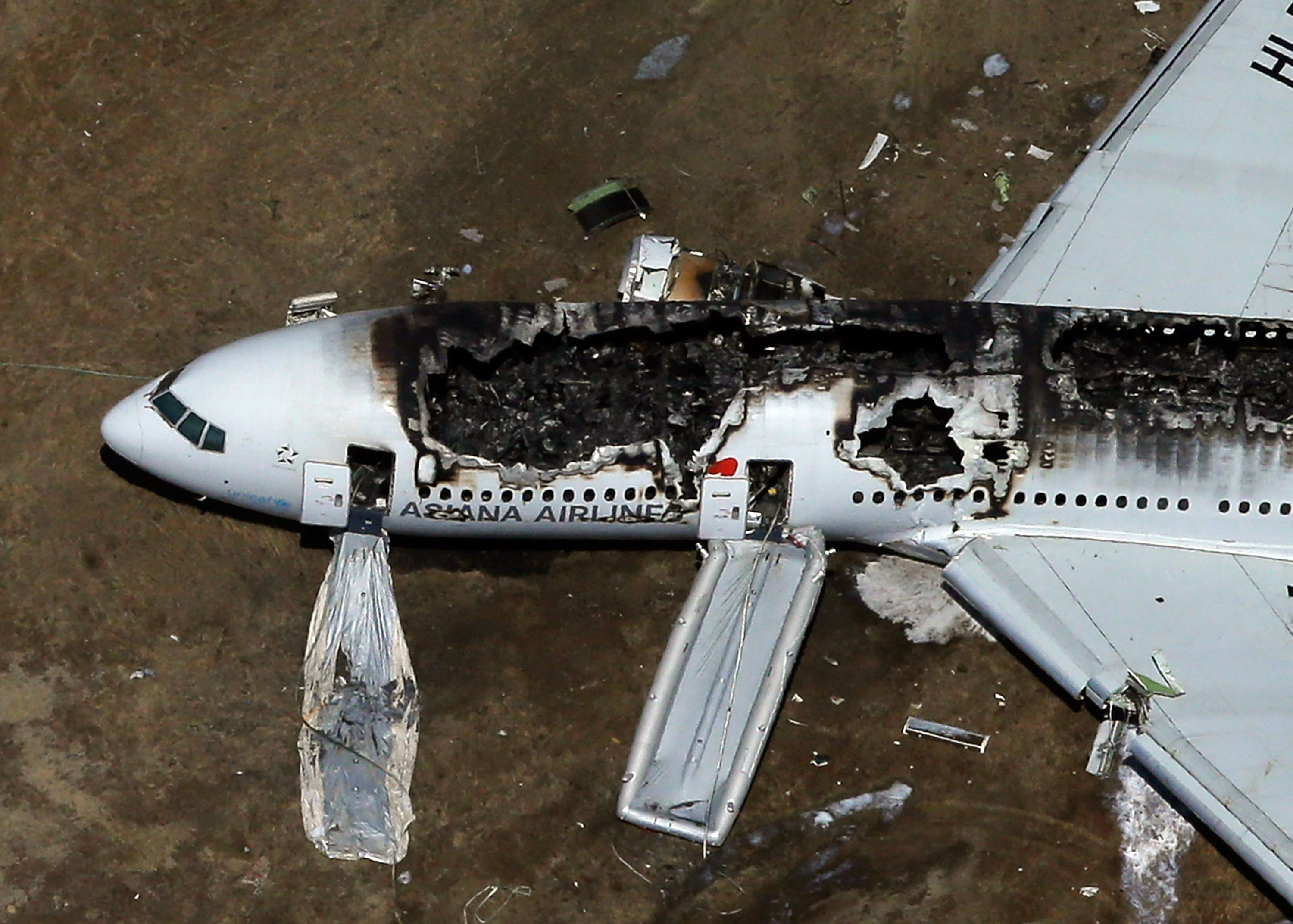 SOUTH SAN FRANCISCO Federal accident investigators said two flight attendants working in the back of Asiana Airlines Flight 214 were ejected and miraculously survived when the plane slammed into a seawall during a crash landing at San Francisco International Airport. Both women were found on the runway, amid debris.

In a news conference Tuesday, National Transportation Safety Board officials said it had also been determined as investigators walked the entire runway area that Flight 214's landing gear hit the seawall at the end of the runway before the tail of the plane during the weekend crash.

The hulking Boeing 777's collision with the seawall broke off the tail and sent the fuselage bouncing and skidding across the airfield on Saturday, leaving two 16-year-old Chinese girls dead and 180 others injured.

Yoon said he would look at the efforts of airline employees to help injured passengers and their family members, visit with the NTSB and other organizations to apologize for the crash and try to meet injured passengers.

Yoon said he can't meet with Flight 214's pilots because no outside contact with them is allowed until the investigation is completed.

NTSB Chairwoman Deborah Hersman said the commanding pilot of crashed jet was on his first trip as a flight instructor, overseeing the pilot who was actually flying the aircraft. In addition, the two pilots had never flown together previously.

Hersman noted that the pilot at the controls was only about halfway through his training on the Boeing 777 and was landing at SFO for the first time ever; this pilot was hired in 1994 and is trained on several other aircraft.

NTSB investigators completed preliminary interviews with those two pilots and the relief first officer, who was seated in a cockpit jump seat; they said he had flown into SFO as many as six times as a monitoring pilot and had experience on a 777 aircraft. But the jump seat pilot said he could not see the runway from his seat during the landing because the plane's nose was pitched up.

A fourth pilot who was not on the flight deck, and was seated in the main cabin at the time of the crash, was still being interviewed Tuesday.

"All of the crew members have been very cooperative and forthright," Hersman said, although none were tested for drugs or alcohol after the crash occurred because the NTSB has no authority to order such tests for employees of foreign air carriers.

"We made inquiries after our arrival on the scene,'' Hersman said. "None of the crewmembers of Asiana Flight 214 were tested for drugs and alcohol post-crash.''

Hersman revealed that the pilots told investigators they were relying on automated cockpit equipment to control their speed during final approach, which prompts questions about whether a mistake was made in programming the "auto-throttle" or if the equipment malfunctioned.

The instructor pilot told investigators that the plane was too high when they passed 4,000 feet. At 500 feet, he realized they were too low and instructed the flight pilot to pull back. At about 200 feet he noticed the "auto-throttle" was not maintaining speed and attempted a go-around, but by then it was too late to recover.

Crew members reported that after impact the aircraft ballooned, yawed left and went into a 360-degree spin.

Upon crashing, there were "numerous reports and accounts about slides deploying inside the aircraft," Hersman said, including from the first officer who described a flight attendant who was trapped underneath an emergency chute that had inflated. As a result, all eight doors and slides have now been removed from the crash site to be inspected as part of the investigation.

While officials on Tuesday didn't explain fully why the plane approached the notoriously difficult landing strip at SFO too low and slow, likely causing the crash, the new details that emerged painted a fuller picture of an inexperienced crew that didn't react fast enough to warnings the plane was in trouble.

A final determination on the cause of the crash is months away and Hersman cautioned against drawing any conclusions based on the information revealed so far, but she called out the pilots for an apparent breakdown of their airspeed monitoring function.

"We have a pilot and two other pilots, they have a monitoring function, one of the main things to monitor is speed," Hersman said, noting that the plane was going nearly 40 mph below the recommended speed as it descended toward the runway.

Audio recordings showed the pilots tried to correct the plane's speed and elevation only seconds before hitting the seawall.

Seven seconds before impact, someone in the cockpit asked for more speed after apparently noticing that the jet was flying far slower than its recommended landing speed. A few seconds later, the yoke began to vibrate violently, an automatic warning telling the pilot the plane is losing lift and in imminent danger of an aerodynamic stall. One and a half seconds before impact came a command to abort the landing.

The plane's airspeed has emerged as a major question mark in the investigation. All aircraft have minimum safe flying speeds that must be maintained or pilots risk a stall, which robs a plane of the lift it needs to stay airborne. Below those speeds, planes become un-maneuverable.

Because pilots, not the control tower, are responsible for the approach and landing, the NTSB said, the cockpit communications are among the keys to figuring out what went wrong.

There's been no indication, from verbal calls or mechanical issues, that an emergency was ever declared by pilots. Most airlines would require all four pilots to be present for the landing, the time when something is most likely to go wrong, accident investigators said.

It was not clear why Flight 214's fourth pilot wasn't in the cockpit for the landing and investigators want to nail down exactly what all four pilots were doing at all times.

It's unlikely there was a lot of chatter as the plane came in. The Federal Aviation Administration's "sterile cockpit" rules require pilots to refrain from any unnecessary conversation while the plane is below 10,000 feet so that their attention is focused on taking off or landing. What little conversation takes places is supposed to be necessary to safely completing the task at hand.

Choi Jeong-ho, a senior official for South Korea's Ministry of Land, Infrastructure and Transport, told reporters in a briefing Tuesday morning in South Korea that investigators from both countries questioned two of the four Asiana pilots, Lee Gang-guk and Lee Jeong-min, on Monday. They planned to question the other two pilots and air controllers sometime later Tuesday.

Choi said recorded conversation between the pilots and air controllers at SFO would be investigated, too.

The doomed flight originated in Shanghai, China, and stopped over in Seoul, South Korea, before making the nearly 11-hour trip to San Francisco.