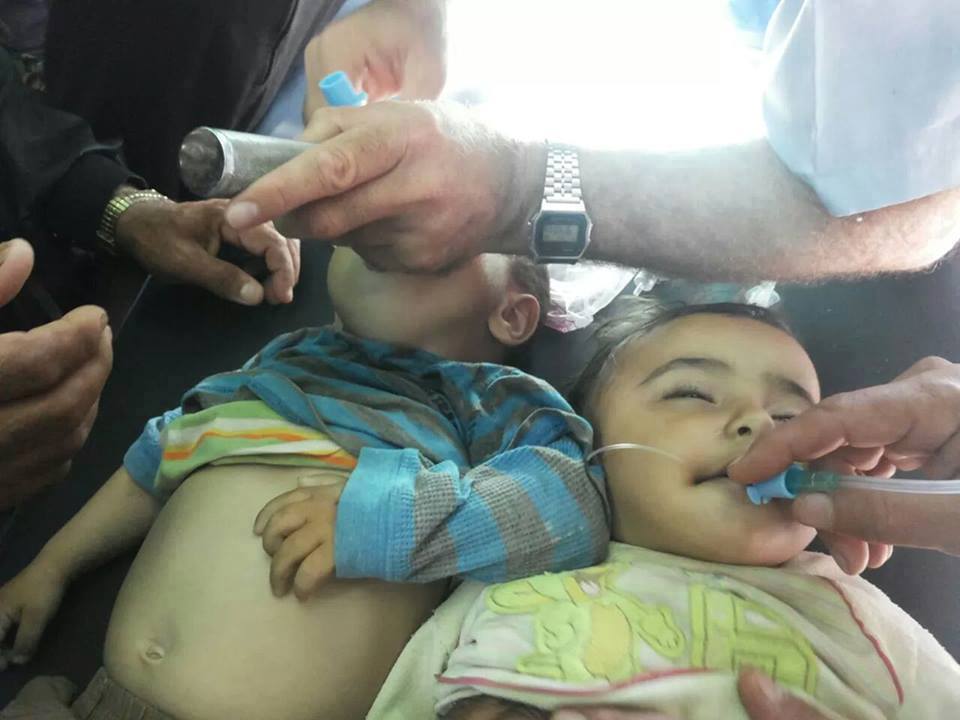 BEIRUT -- At least 15 children died after receiving vaccinations in rebel-held parts of northwestern Syria, while the death toll from two days of government airstrikes on a central city climbed to nearly 50, a heavy toll even by the vicious standards of the country's civil war, activists said.

The children, some just babies, all exhibited signs of "severe allergic shock" about an hour after they were given a second round of measles vaccinations in Idlib province on Tuesday, with many suffocating to death as their bodies swelled, said physician Abdullah Ajaj, who administered the vaccinations in a medical center in the town of Jarjanaz.

It was unclear what killed the children, but Ajaj said in an interview via Skype that they all exhibited the same symptoms to varying degrees. He said it was the first time he had ever seen such a reaction to vaccinations.

"There was shouting and screaming, it was hard for the parents. You get your child vaccinated and then you find your child dying, it's very hard," Ajaj said. There weren't enough respirators in the clinic, making the situation even worse, he added.

Video footage uploaded to social media showed a medic examining a young girl who was squirming. Another child, in an orange tee-shirt and blue pants, appeared lifeless as a medic administered CPR. He then opened the child's mouth to reveal a swollen, blue-tinged tongue. The footage corresponded with Associated Press reporting of the event.

Syria's conflict, now in its fourth year, has caused the collapse of its health system in contested areas, scattering medics, destroying clinics and making medicines and equipment difficult to obtain. Nationwide vaccination efforts have been thrown into disarray, and polio re-emerged in parts of Syria last year.

The Western-backed opposition based in Turkey said it had suspended the second round of measles vaccinations, which began on Monday. The campaign was meant to target 60,000 children. In a statement, it said the vaccines used Tuesday met international standards and did not say what may have caused the deaths.

It is extremely unlikely that the vaccinations killed the children, said Beirut-based public health specialist Fouad Fouad, who said spoiled vaccinations were more or less harmless. "It cannot cause death," he said.

"Measles is a major threat to children in Syria and the campaigns are vital ... and especially important for children who've been away from their homes and communities and are living in camps or in other unsanitary conditions," Haq said.

Opposition representatives could not immediately be reached for comment.

The United Nations says that more than 190,000 people have been killed since the start of Syria's uprising against President Bashar Assad in March 2011. The revolt began with peaceful protests but escalated into an insurgency and set off a civil war after government forces waged a brutal crackdown on dissent.

In the latest violence, Syrian government airstrikes killed some 50 people in the opposition-held city of Talbiseh this week in an apparent attempt to target a rebel commander, activists said Wednesday. The dead included a mother and her five children, who were crushed under the rubble, and a rebel commander and several fighters, said the Britain-based Syrian Observatory for Human Rights.

The Observatory, which obtains its information from a network of activists on the ground, said it counted 48 killed in two days of strikes on Monday and Tuesday in Talbiseh. Similar information was reported by a local Talbiseh activist collective. Both groups said the death toll was likely to exceed 50 as residents were still pulling bodies from the rubble.

Videos uploaded of the aftermath in Talbiseh showed a man weeping as he clutched his lifeless baby boy, and residents praying over the shroud-wrapped bodies of the mother and her children. The videos appeared genuine and corresponded to The Associated Press' reporting of the event.

State-run media said Tuesday that the army targeted a meeting of "terrorists" in Talbiseh, the term the government uses to refer to all the rebels. The Observatory said that leading members of a rebel group were killed, without providing further details.

The Syrian government has stepped up its bombardment of opposition-held areas of the country over the past week.

An airstrike on Tuesday on the northern town of Deir Simbul killed the daughter of a powerful rebel leader who has ties to the Western-backed Syrian National Coalition.

Jamal Maarouf, the head of the rebel Syrian Revolutionaries Front, said in a video released Wednesday that his daughter as well as a member of his group were killed a day earlier in a series of government air raids.

Maarouf, who is considered a moderate, said that his group has been subjected to a wave of bombing attacks by the extremist Islamic State group over the past five days, and that his fighters had killed four would-be suicide attackers. He vowed to forge ahead in his group's two-front fight against the government and extremists.

The attacks on Maarouf came exactly a week after the ultraconservative Ahrar al-Sham group lost a dozen of its leaders, including the group's leader, in a bombing.

ISIS leader blows himself up during U.S. special ops raid in Syria
More
Thanks for reading CBS NEWS.
Create your free account or log in
for more features.
View CBS News In
CBS News App Open
Chrome Safari Continue
Be the first to know
Get browser notifications for breaking news, live events, and exclusive reporting.