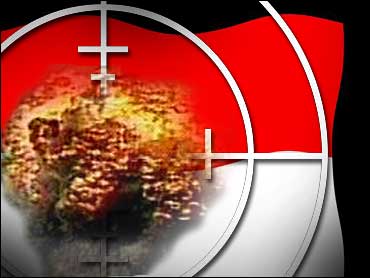 A Christmas Eve bomb attack on the home of the mayor of a southern Philippine town killed at least 13 people and wounded 12 others, the military said.

The military said Tuesday's bombing appeared to be the work of the Moro Islamic Liberation rebels, but a spokesman for the Muslim separatist group denied involvement in the attack.

The bomb went off near the home of Mayor Saudie Ampatuan in Datu Piang in Maguindanao province, said army spokesman Maj. Julieto Ando.

Ampatuan died of injuries to his head and chest. Among those killed were a town councilor, the treasurer and a bodyguard, Ando said. The others were not immediately identified, Ando said. He said the death toll rose after authorities counted all the dead from hospitals in different towns.

"There is no reason for us to do that because the mayor is not our enemy," he said.

The military in the past has blamed the rebels for similar attacks in the area.

A battalion of about 500 soldiers was deployed to Datu Piang in response to the attack.

The rebels, who have signed a cease-fire with the government, have been fighting for Muslim self-rule in the southern Philippines for nearly three decades. The Philippines is mainly Christian.

Ando said Ampatuan is a "nemesis" of the rebels, who earlier this year attacked a convoy transporting the mayor and his father, Maguindanao Gov. Andal Ampatuan. The men survived the ambush, but two bodyguards died.

The Philippines was one of several countries in Southeast Asia targeted by State Department warnings after the deadly terrorist bombing in Bali, Indonesia in October.

In a travel warning issued Nov. 3, the State Department urged caution by all American travelers.

"The terrorist threat to Americans in the Philippines remains high," the warning noted.

"Information available to the United States Government suggests terrorist groups may be planning bombing attacks in the Philippines from now through the New Year holiday period," it continued.

Abu Sayyaf was blamed for a series of deadly bombings in the Philippines in October that struck two department stores, killing seven people and injuring 152 others, and a blast at a Roman Catholic shrine, killing one and injuring 18.