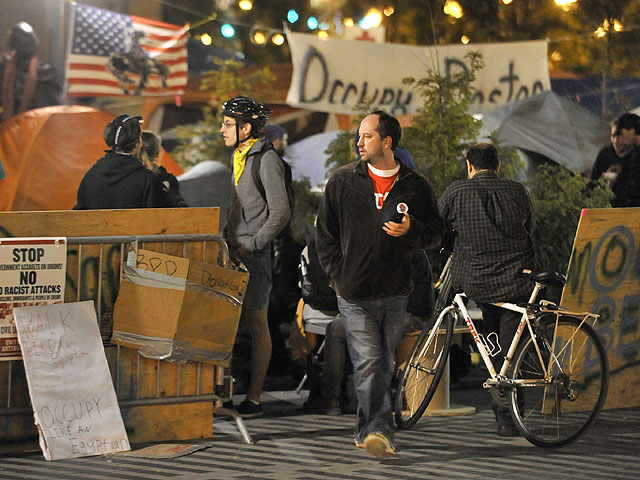 BOSTON - Protesters from the Occupy Boston movement vowed to continue their demonstration indefinitely despite the arrests of 129 people who police say refused to leave a plot of downtown land.

Eighteen of the people who were arrested before dawn Tuesday were expected to be arraigned Tuesday afternoon on charges that included trespassing and unlawful assembly.

As participants waited in Boston Municipal Court, some said the arrests would not detract from their message, and could actually draw people to the movement.

"It's meant to intimidate people, but I don't think it will work. I think it will inspire more people to join us," said Khury Petersen-Smith, 29, a graduate student at Clark University in Worcester who was arrested.

"Occupy Boston has posed no threat to anybody," he said. "That the city would stop it with violence is shameful."

Phil Anderson, 24, of Westwood, who is part of Occupy Boston but was not arrested, said the group is planning to extend the protest into the winter.

"This could be months," Anderson said.

"We have a winterization committee. We have medical teams preparing anything needed for the winter. So we are going to be fully prepared to stick out the whole winter here. And we are going to stay until we see real-life, systematic change in how America works." he said.

Anderson said the movement is growing and simply needs more space. If the city won't agree to allow protesters to expand, they will move to restricted areas anyway, he said.

"We'll deal with consequences the same way we always do, which is non-violently and peacefully," he said.

A video filmed by the protesters showed a man handcuffed while an officer had him in a headlock, a man being thrown twice to the ground within several seconds and police handcuffing a man while pinning him to the ground.

City officials and Boston police deny mistreating demonstrators. No one was seriously injured.

Police said they made the arrests starting at about 1:30 a.m. Tuesday after the protesters ignored warnings to leave a plot of land near where they have been camped out for more than a week.

The protesters, part of the national Occupy Wall Street movement, had tried to expand from their original site in Dewey Square to a second site across the street, along the Rose Kennedy Greenway. A local conservancy group recently planted $150,000 worth of shrubs along the greenway, and officials said they were concerned about damage.

The protesters on Wall Street in New York City and in Boston and other cities have described themselves as the "99 percent" — a term they say refers to Americans struggling to pay their bills while the income gap between the rich and middle class widens. They claim most Americans fall into this group.

Mayor Thomas Menino and Police Commissioner Edward Davis have had a hands-off policy with demonstrators as long as they remained peaceful. But they said they will maintain order and safety if protesters get unruly. Davis said it was "a shame" that 10 days of peaceful protests had ended up in arrests.

Boston police said they had warned protesters for several hours that they would have to return to Dewey Square, where a tent city has been steadily growing, and issued leaflets saying protesters could not occupy the greenway.

Menino said he agrees with the protesters on "most of their issues." But he said he is responsible for the welfare of the whole city and the protesters "took some actions that weren't in the best interests of public safety."

Boston resident Matt Hollander, 25, said a group of veterans carrying American flags were standing between police and the protesters when officers advanced on them. One veteran, he said, was pushed to the ground, and a group of protesters fell in a heap.

"If they wanted to arrest us they could have done that without pushing us ... without trampling the flag," Hollander said.