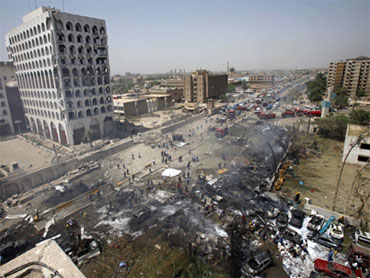 A Baghdad court on Thursday sentenced 11 Iraqis to death for their roles in a series of deadly attacks that rocked the country's capital last August.

The attacks were a major blow to Iraq's Prime Minister Nouri al-Maliki, who is seeking to reassure Iraqis his government has security under control ahead of crucial March elections.

The blasts killed more than 100 people.

There have since been two other massive attacks in Baghdad primarily targeting government buildings, in October and December. Those attacks together killed more than 280 people and injured hundreds more.

Bayrkdar said the defendants have a month to appeal the death sentences, which were handed down with the ruling. He declined to provide details about those convicted.

Shortly after the August attacks, the Iraqi military released what it said was the confession of a Sunni man identified as a senior member of Saddam Hussein's ousted Baath Party. The military said the man admitted to supervising the attack against the finance ministry.

In the televised confession, the 57-year-old suspect identified himself as Wisam Ali Khazim Ibrahim and said he was a Baath Party member and former police officer before the 2003 U.S.-led invasion.

Ibrahim said the operation was ordered by a Baath Party operative in Syria in a bid "to destabilize the regime." Iraqi authorities said at the time more than 10 people comprising the whole network involved in the attacks had been arrested.