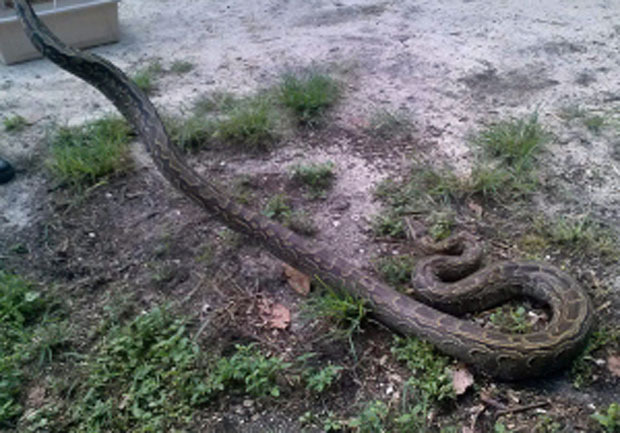 Miami-Dade County responded to the initial call, but the Florida Fish & Wildlife Commission wasn't notified until September 2 and didn't issue a general news release about the attack and the details are just now becoming public

The attack happened near the Bird Drive recharge area of Miami-Dade County, where other rock pythons have been seen.

According to FWC, there appears to be a proliferation of these types of pythons in the area.

"We do know there is a colony of these types of pythons concentrated in a six-square mile area in southwest Miami-Dade County," said Jorge Pino, spokesperson for FWC.

The 10-foot long, 36-pound snake killed the 60-pound Siberian Husky in just minutes from when the animals were discovered. The snake was killed and is being sent to the University of Florida for a necropsy.

Experts say that these types of attacks are indeed rare and that encountering pythons most commonly occurs in communities on the edge of the Everglades in the fall and winter months.

The FWC said they are conducting "targeted outreach and canvassing of the nearby residential areas to inform folks about the species," according to an internal FWC email. FWC said in the email that the targeted approach was "a more appropriate method to inform the potentially affected public than a general media release would have been."

State biologists believe a colony of rock pythons is living in the area and breeding. A total of 27 North African pythons have been captured in the area where the Husky was killed in the area which is south of Tamiami Trail, east of Krome Avenue, North of Bird and West of SW 137th Avenue.

FWC said it's important to remember that wild pythons do not generally attack humans without provocation and attacks on domestic pets are rare. However, adults should supervise small children and pets when outside.

FWC also said it is expanding the current search areas and canvassing neighborhoods with information for residents ahead of the fall and winter seasons when pythons are more likely to be encountered.