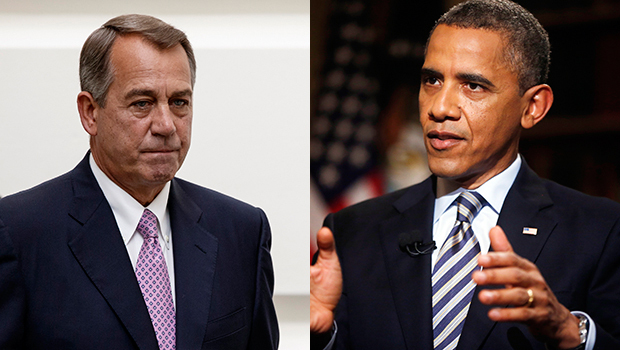 House Republicans and President Obama appear to be at an impasse over a Republican proposal to raise the debt limit for six weeks, but seem committed to continuing negotiations for the first time since the government was shut down 10 days ago.

"After a discussion about potential paths forward, no specific determination was made," the White House said in a statement following Mr. Obama's Thursday afternoon meeting with House Republican leaders. "The President looks forward to making continued progress with members on both sides of the aisle. The President's goal remains to ensure we pay the bills we've incurred, reopen the government and get back to the business of growing the economy, creating jobs and strengthening the middle class."

A spokesman for House Speaker John Boehner, R-Ohio, issued a similar statement to the one from the White House, adding that communication would continue throughout the night. "House Republicans remain committed to good faith negotiations with the president, and we are pleased there was an opportunity to sit down and begin a constructive dialogue tonight," the statement said.

The meeting between Mr. Obama and his team and the House Republican leaders lasted approximately 90 minutes. Boehner did not talk to reporters afterward, but when the group returned to the Capitol, House Majority Leader Eric Cantor, R-Va., told reporters the talks had been productive.

"We had a very useful meeting. It was clarifying, I think, to both sides as to where we are. And the takeaway from the meeting was, our teams are going to be talking further tonight. We'll have more discussion. We will come back to have more discussion," Cantor said. "The President said that he would go and consult with the administration folks, and hopefully we can see a way forward after that."

Rep. Paul Ryan, R-Wis., the chairman of the House Budget Committee, said that president said neither yes nor no to the proposal.

The Republican leadership presented the plan to their conference on Thursday morning. In exchange for a six-week increase in the debt ceiling without any policy conditions, they a promise from Mr. Obama to engage in negotiations to continue lowering the deficit. The proposal was the first sign of any legislation that might head off a default when the U.S. exhausts its borrowing authority on Oct. 17.

During the day, the sticking point that emerged was whether White House and Senate Democrats would be willing to decouple the debt ceiling from the government shutdown, which would not end under the Republican proposal.

After Senate Democrats met with President Obama this afternoon, the answer from Senate Majority Leader Harry Reid was, "it's not going to happen."

"Let's wait and see what the House does," Reid said. "When they send us something, we'll look at it as clearly and as closely as we can, under the same determination that we've made: Open the government. There is so much pain and suffering that's there. It's really tear-jerking, to say the least. And so we want the government open. We want to be able to pay our bills. "

During the daily press briefing, White House spokesman Jay Carney indicated that President Obama would likely sign a short-term debt ceiling extension being offered by Republicans, but would prefer a longer-term measure accompanied by a reopening of the government as well.

"The president is happy that cooler heads at least seem to be prevailing in the House, that there at least seems to be a recognition that default is not an option," Carney said, offering the caveat that the White House has not seen an actual proposal from the House GOP. But, he added, "The president strongly prefers a longer term resolution, so that we can get away from this periodic brinkmanship."

The White House is still calling on House Republicans to reopen the government as well as raising the debt ceiling. "He wants congress to fulfill both of its responsibilities," Carney said.

House Minority Leader Nancy Pelosi, D-Calif., wasn't as optimistic as the White House, saying a six-week lifting of the debt ceiling "is not the right way to go."

"I think we should go at least one year so that there is some certainty in the markets and that every six weeks people don't have to wonder if the United States of America is going to stand by its full faith and credit," Pelosi said." But nonetheless, nonetheless, let's see what they have to offer."

Aides also told CBS News that the Republican proposal would bar the Treasury Department from using "extraordinary measures" to keep borrowing once they have reached the limit in order to put pressure on both sides to negotiate within the six-week time frame.

Speaking to reporters after the Thursday morning meeting, Boehner called the proposal a "move half way to what [President Obama] has demanded."

If the legislation is free of any other policy conditions, it could get through the Democrat-controlled Senate and the White House. Democrats have repeatedly said they will not begin negotiating a larger budget deal until Republicans pass legislation to reopen the government and increase the debt ceiling.

At a press conference earlier this week, Mr. Obama indicated his willingness to accept a short-term increase. "If they can't do it for a long time, do it for the period of time in which these negotiations are taking place," he said of the GOP.