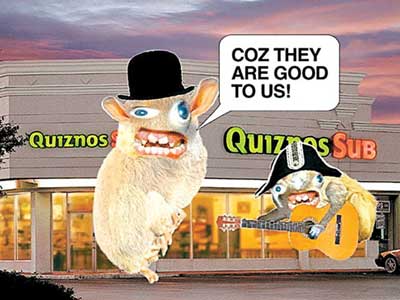 COMMENTARY David Packard, the iconic cofounder of HP (HPQ), once said, "Marketing is too important to be left to the marketing department."

Besides being true, Packard's insightful statement points out the greatest challenge of marketers everywhere. Everybody has an opinion, everybody wants to have a say and everybody thinks their "focus group of one" is more important than the actual target audience.

Maybe that's why there's so much bad marketing out there. There's no accountability because David Packard let all the marketers off the hook. Nah, I'm not buying that either.

Speaking of marketing screw-ups, these 10 companies and campaigns are clear standouts, at least from my focus group of one. If lousy marketing were a crime, they'd all be indicted, for sure:

Motorola Droid Razr Maxx. Over the years, Motorola (MMI) has had some of the worst marketing on the planet. I mean, who taught these people about branding? They're always giving products more names than anyone can remember. Besides having four names, this phone is even dual branded with Verizon and has 4GS stamped in big letters on the back. Maybe they should have called it the Motorola Verizon Droid Razr Maxx 4GS. Rolls right off the tongue, just like iPhone.

Quiznos. At a time when Subway has grown to become the largest global restaurant chain and shares of McDonalds (MCD) and Yum! Brands (YUM) are trading near all time highs, Quiznos somehow managed the steepest decline of any major fast-food chain, getting sued by thousands of franchisees, and narrowly avoiding bankruptcy, at least for now. One of the main reasons is bad marketing, including an ad campaign that featured horribly disfigured, annoying, singing rodents called spongmonkeys, although my wife can't stop laughing when she sees them. Go figure.

Sony's synergy campaign. For the past two years, Sony's (SNE) been trying desperately to get Wall Street and consumers to believe there's synergy between its movie and consumer electronics businesses. For example, watching a Sony movie on a Sony TV streamed through a Sony PS3 somehow makes a difference in the user experience. It's all smoke and mirrors, but it is amusing to watch CEO Howard Stringer struggle to explain in this interview. And last year alone, Sony lost over $3 billion.

Sprint CEO Dan Hesse's TV ads. While Sprint (S) was falling apart at the seams, losing subscribers in droves and $3 billion or so a year, every year, CEO Dan Hesse was doing those amazing TV commercials promoting the virtues of "unlimited data service" that WSJ Deal Journal imagines "took 4,000 takes apiece" to film. So how are those unlimited service plans working out for you, Dan? Not too well, huh?

Research In Motion. Come on, do I even have to say it? Matsushita finally took the hint and changed its company name to Panasonic (PC). Nissan got rid of Datsun. It's only a matter of time for Daimler AG. RIM's (RIMM) own consumer ads say BlackBerry; they don't even mention the company name. Change it. But fix the products first. They're the biggest marketing crime, by far.

Jos. A. Bank. "Buy a suit and get two suits plus two shirts plus two silk ties absolutely free." Do we really need to hear these dumb Jos. A. Bank (JOSB) ads every day of our lives to know there's a sale going on? I mean, does anyone actually walk into this place and pay full price? And what's up with that dumb name with an abbreviated first name and middle initial? J.C. Penney (JCP) CEO Ron Johnson, the man behind Apple's (AAPL) retail stores and Target's (TGT) turnaround, has decided to permanently ditch sales and maintain consistent rock bottom prices. Now that's marketing.

New U.S. Postal Service commercial. There's a new U.S. Postal Service TV commercial where the narrator says, "A refrigerator has never been hacked. An online virus has never attacked a corkboard. Give your customers the added feeling of security a printed statement or receipt provides. With mail. It's good for your business and even better for your customers." Really? Spam customers with junk mail so they can hang it on the refrigerator door? Really? Does marketing get any more desperate than that?

Marketing is like sex: everyone thinks they're good at itShattering 10 branding myths

PC Matic TV commercials. Have you seen the TV ads for PC Matic security software? They're hands down the cheesiest spots I've ever seen on primetime television. The actors are amateurs and the "moron dad" and "know-it-all mom" is a tired, old cliche that's actually offensive in this day and age. My vote for the worst, dumbest ad campaign ever.

The entire high-tech industry. Not only did Packard have a point when he made that famous statement, but, in my opinion, Silicon Valley has only had two great marketers in all the decades since: Steve Jobs and Bill Davidow. In case you're not familiar with the latter, he's a venture capitalist and former Intel executive who wrote the seminal book, "Marketing High Technology." Maybe it's something in the water, but high-tech companies have notoriously bad marketing.

How to mess up a salary negotiation