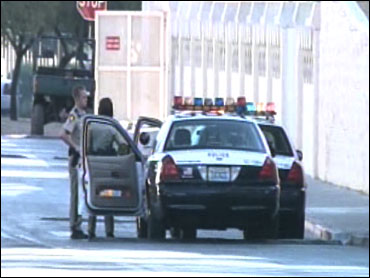 Las Vegas police are studying surveillance video for clues in the death of a man in a parking garage outside the Luxor hotel-casino.

Two people walked into the garage around 4 a.m., reports CBS station KLAS-TV. One person was a male, and police say he noticed a strange device sitting on his vehicle. When he tried to remove it, the device exploded.

Police said it was a small explosion but the man was injured and later died at an area hospital. The person with the victim, police say, was not harmed and is being questioned.

Police said the blast behind the Luxor hotel-casino was directed at the man, who worked at a business inside the pyramid-shaped hotel, and was not a terrorist act or a mob hit. Police did not identify the victim or the person who was with him.

"We believe the victim of this event was the intended target," police spokesman Bill Cassell said. He denied initial reports that a backpack had exploded, and dismissed suggestions that the slaying had ties to organized crime.

Cassell said no threat was made against the Luxor or its employees.

The man who was killed "worked inside the Luxor, but we do not think he was on the hotel payroll," he said. He characterized the slaying as "a homicide with an unusual weapon," but declined to describe the device.

Gordon Absher, a spokesman for MGM Mirage Inc., which owns the Luxor, said the person killed was not a company employee.

"Police do not believe the resort was targeted in any way," Absher said, adding that the Luxor was not damaged and that — except for the top floor of the two-story parking garage — the resort was continuing normal operations.

There was little damage around the vehicle and the hotel was not evacuated, police and a hotel official said.

Entrances were sealed after the explosion and authorities went vehicle to vehicle with bomb-sniffing dogs. People were allowed to remove their vehicles after they had been inspected, Absher said.

The explosion happened in the parking garage behind the Luxor, a hotel at the south end of the Las Vegas Strip, a main road where many of the city's casinos are located.