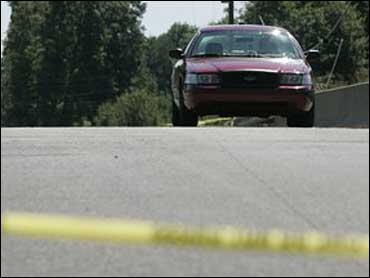 Investigators scoured hundreds of miles of highway for clues to a killer after two sets of sniper attacks within hours of each other left one man dead, another wounded and four vehicles peppered with bullet holes.

A day after the attacks, police were still trying to identify potential suspects and searching for any witnesses who might have seen the shooter.

Electronic highway signs across the state flashed a message to motorists Monday morning: "Report suspicious overpass activities - call police." Near the shooting sites, state Police asked businesses for surveillance video from the hours surrounding the Sunday morning attacks, and they asked motorists who had been through the Seymour area in the past week to check their vehicles for bullet holes.

Indiana State Police Sgt. Jerry Goodin said investigators were comparing bullet fragments to determine if the two sets of attacks, about 100 miles apart on Interstates 65 and 69, were related.

"We're keeping an open mind," Goodin said. "Wherever they're from, we're going to go after them."

The first bullet killed Jerry L. Ross, 40, of New Albany as he rode in a pickup truck on I-65 near Seymour, about 50 miles south of Indianapolis, authorities said. The shooting was reported about
12:20 a.m. Sunday.

As state police were investigating, the Seymour Police Department received a call from a gas station just off I-65 reporting a second shooting.

The driver of the second pickup, Brandon Bonnesen of Anita, Iowa, said he and Robert John Otto Hartl, 25, of Audubon, Iowa, were driving to Florida for construction work when he heard a loud noise.

"I cussed a little bit and looked at my friend. He was all bent over and I said 'You all right?" He said 'I'm OK, keep going,"' Bonnesen said.

The bullet had grazed Hartl's head near his left ear, Bonnesen said.

Police closed a 14-mile stretch of I-65 for eight hours after the Seymour shootings. The north-south highway through Indiana is heavily traveled at all hours and is the most direct route between Chicago and the South.

About two hours after the shootings in southern Indiana, bullets struck a semitrailer and an unattended sport-utility vehicle about 100 miles to the northeast on Interstate 69. No one was injured in those shootings.

Goodin said authorities were considering the shootings to be linked "until proven otherwise."

The highway attacks were reminiscent of a series of random shootings that killed one person and terrorized the Columbus, Ohio, area in late 2003 and early 2004. Charles McCoy Jr. was arrested in March 2004 and was sentenced to 27 years in prison after pleading guilty.