It's a dish that combines the different tastes of salty and sweet. Chicken and waffles has been a soul food staple menu item since the 1930s in Harlem when the meal would be a late night "belly-filler" for musicians after work. Imagine fried chicken that is breaded with spices, drumsticks, thighs and breasts soak in those spices during the cooking process and then they are placed upon flaky waffles that are swimming in hearty maple syrup. It is a meal that anyone will remember for the next month and wish to return again and again till the weight scale tells them to stop. South Florida has restaurants which offer chicken and waffles and customers should eschew the usual burger, wings and nacho platter to indulge in this classic.

LoKal
3190 Commodore Plaza
Miami, FL 33133
(305) 442-3377
www.lokalmiami.comVoted Best Chicken N' Waffles by the Miami New Times, only the setting is changed and its a good one. Commodore Plaza in Coconut Grove is a beautiful area where natives and tourists can walk wide sidewalks and open cafes call out to them to sit and sample great food. The Barnacle Historic state park is on the other side of the street and Biscayne Bay is only a five minute walk down McFarlane Road.

KUSH Wynwood
2003 N Miami Ave
Miami, FL 33127
(305) 576-4500
www.kushwynwood.comFrom the creators of LoKal, KUSH Wynwood is in the artist enclave where the rebirth of Miami is taking place. They give customers Belgian waffles with powdered sugar and homemade maple syrup together with fried chicken to produce an offering that has been voted the best in Miami by the Miami New Times.

American Social Brickell
690 SW 1st Ct
Miami, FL 33130
(786) 801-2466
www.amsobar.comGet a true taste of what its like to live, work and play in Miami at the American Social bar in Brickell. The Brickell area is the golden part of the city with its wide sidewalks and combination of skyscrapers and nature. Biscayne Bay only a five minute walk. There submission of chicken and waffles attacks the taste buds with vanilla herb waffles, southern fried chicken, cherries, mascarpone cheese and bourbon maple sauce. 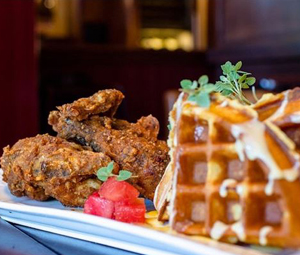 Royal Pig Pub
350 E Las Olas Blvd
Ft. Lauderdale, FL 33301
(954) 647-7447
www.royalpigpub.comWalk into the Royal Pig Pub and you'll feel as if you're on the set of a medieval knight move because of the layout. The place features a long bar in the middle to seat the knights and seating along the sides. Their chicken and waffles presentation is superb with cajun fried breasts, legs and thighs, a cornbread waffle, lemon creme anglaise, and salted maple butter sauce with a marinated watermelon on the side.

S3 Restaurant
505 N Fort Lauderdale Beach Blvd
Ft. Lauderdale, FL 33304
(954) 523-7873
www.s3restaurant.comThe great thing about eating on the coast is being able to relax and watch all the cars passing by knowing that you are at ease and don't have to endure the long trek to your destination. You can watch the sun set on the horizon, drink a cocktail and feel as if you only have to walk home safe. S3 features a sweet potato waffle, fried chicken and bacon butter on their brunch menu.

Eric L Labrador is a freelance writer covering all things Miami. His work can be found on Examiner.com.