In the land of eternal summer, ice cream is king but finding the right sundae might be harder than you think. Many shops offer great deals on sundaes and top them with the traditional toppings, but some throw the whole kitchen sink at you. View this list of tropical delights, decadent desserts and amazing add-ins that will have your mouth watering before you ever take a bite. Find more South Florida ice cream hot spots by checking out last year's list, Best Ice Cream Shops.

"Jaxson's Ice Cream Parlor & Restaurant"
128 S. Federal Highway
Dania Beach, FL 33004
(954) 923-4445
jaxsonsicecream.comJaxson's Ice Cream Parlor & Restaurant is South Florida's most infamous name in ice cream. The ice cream is made in store and sundae seekers and competitive eaters always opt for the the Jaxson's trademark, Kitchen Sink. This gargantuan concoction is served in a miniature replica of a kitchen sink and features 40 scoops of ice cream sloppily slathered with whipped cream, hot fudge, nuts and cherries. It is intended for parties of four or more to share and is the brainchild of recently deceased owner, Monroe Udell. As a testament to his legacy, the Kitchen Sink has been duplicated at several establishments across the United States and has been profiled on the Food Network, but none come close to the original.

"Wall's Old Fashioned Ice Cream
8075 S.W. 67th Ave.
Miami, FL 33143
(305) 740-9830
www.wallsicecreamfl.comLike Jaxson's, Wall's Old Fashioned Ice Cream is true to traditional ice cream making, sourcing over 28 flavors of locally manufactured homemade ice cream. The menu includes several sundaes like the Peanut Butter Deluxe, served in a bowl and filled with peanut butter ice cream, pourable peanut butter and finished with hot fudge, whipped cream and peanuts. For those with a cookie craving, the Cookie Monster ice cream sundae features a large chocolate chip cookie, two flavors of ice cream of your choosing, whipped cream, a cherry and a wet and dry topping of your choosing. There are other sundae variations available if that doesn't tickle your fancy and patrons can choose seasonal and sugar-free alternatives as well. Be sure to try some of the signature ice cream flavors like the kid favorite, rainbow-colored Superman ice cream along with the traditional favorites.

Swensen's Restaurant & Ice Cream Parlor
1586 S. Dixie Highway
Coral Gables, FL 33146
(305) 661-7658
swensensrestaurant.comSwensen's serves South Florida's most indulgent ice cream. It's so visually tantalizing that you gain five pounds just by looking at it and then forget to care that you've blown your diet after eating it. The sundaes come in two sizes, mega (five to eight scoops) and regular (two scoops), and are served in a either a glass bowl or a glass cup. Flavors include Oreo'ver load, Earthquake and the Super Sundae, but for a bit of nostalgia, try the James Dean Dream. It is Turkish coffee and chocolate ice cream topped with butterscotch, chocolate fudge, roasted almonds, a cherry, whipped cream and a wafer.

Related: Pick-A-Side: What Is Your Favorite Ice Cream Flavor 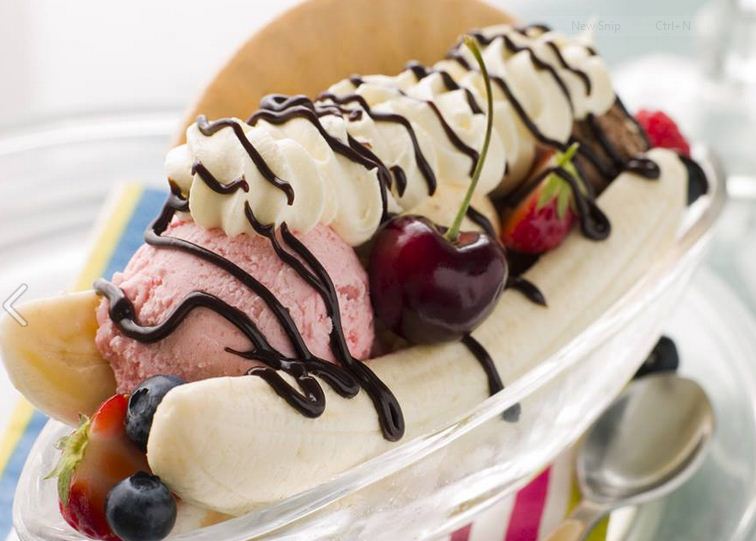 Udder Sweets
1727 Main St.
Weston, FL 33326
(954) 385-9033
uddersweets.comIf Willy Wonka had an ice cream store, Udder Sweets would be it. The walls are lined with candy-filled jars and its sundae motto is "we scoop it and you top it." There are over 32 flavors of ice cream including signature oddballs like Spongebob and Marshmallow Fluff and pricing is based on weight. So feel free to pile on as many toppings as you like of new and old fashioned candy. If your sweet tooth is still not satisfied, you can purchase a candy apple to go and feel like you've just visited the fair.

Miami Coppelia
4750 N.W. 7th St.
Miami, FL 33126
(305) 883-4556
www.miamicoppelia.comMiami Coppelia's heart is in its tropical roots. It serves traditional favorites as well as island classics like mango, mantecado and mamey. Some sundaes add a Cuban twist with flan or a slice of cake mixed in and are served in a platter or inside of a glass. Try the five-scoop Ensalada de Helado (ice cream salad) for a greater mingling of flavors or the fruit cocktail and marshmallow topped Canoa India. Either way, you'll get a taste of the islands.

Niema Hulin was born in Newark, NJ but raised in Lexington, South Carolina for the bulk of her formative years. In 2002, she moved to Miami after graduating from the University of Florida. Since then, Niema has worked in film, television and commercials as a Production Assistant and Production Coordinator. Some of her films have included Bad Boys II and I Am Number IV. Her work can be found at Examiner.com.