When it comes to the contributions made by Miami-Dade and Broward County football players at the collegiate level, the successes have been overwhelming.

As dozens of colleges across the country head to these two counties every spring to enhance their rosters – Florida Atlantic University has been slow to the party.

But with Charlie Partridge and now Lane Kiffin, things are starting to turn around in Boca Raton, slowly.

As Charlie Strong found out when he was at Louisville, and other powers across the nation continue to understand, you win more consistently when you have a South Florida prospect – or five – on your roster.

They come ready to play.

What Kiffin has long known and what many other college coaches have relied upon, is when you have a single tri-county area that boasts over 60 players on NFL rosters every season – you better make your way down there if you want to infuse some talent into your football team – in a hurry.

While territory used to be an issue when it came to recruiting South Florida, athletes want to play – and whether it's in Morgantown, Seattle, Miami, Orlando, Tallahassee, Gainesville, Tampa or Boca Raton - any college football program would love to stack their rosters with these impressive prospects.

As the Owls are now going through their first spring under Kiffin, you can see the difference. Again, started by Partridge and now continued at the next level with someone who has been there and done that before.

Since FAU began its football program – with legendary Howard Schnellenberger bringing the Owls into the spotlight, there has never been that huge relationship with Miami-Dade and Broward athletes and coaches.

But that could be changing.

As this program went through a scrimmage last Saturday, there is no doubt that the talent and coaching are in place – as the No. 1 recruiting class in the conference will back up.

As there were some familiar faces from outside of the area, like big-time quarterback D'Andre Johnson, it was refreshing to see so many South Florida football players who are more than doing their part to turn this thing around.

There were those who have stepped to the head of the class like one time Coral Gables star running back Gregory "Buddy" Howell, who is already making NFL coaches and scouts drool with his size and football skills.

There is Booker T. Washington product Ocie Rose, who has also made a major impact for this program. Also, Homestead sophomore linebacker Rashad Smith, who we have all watched since he arrived in high school. He is big time and well on his way.

The Owls also have former Cypress Bay safety Marquese Dudley-Gordon, who has had plenty of experience at the college level after leaving a program that reached the highest level in high school.

In addition to those quality athletes, there are also receivers such as former Hialeah standout Henry Bussy and North Miami product Tavaris Harrison; former Rutgers recruit Nick Internicola, a defensive lineman from University School. There are also defensive back Andrew Soroh (American), and American Heritage Plantation linebacker Bradley Clement, who was in the mix as a freshman.

"You look at all the talent that is out here and the ones that are coming in, and things can get very exciting around here," said Miami Palmetto head coach Mike Manasco. "We brought some players to watch them and see what it's going to take over the next year."

For those in South Florida who lost track of their former standouts, many are in Boca Raton.

"For years, FAU has spent a lot of time in other parts of Florida – and even across the country, which is fine," Dana Wiley of Prep Films pointed out. "But you really have to keep more of those Miami-Dade and Broward kids home – which has proven over the past 40 plus years to be a winning formula."

Other players who have an opportunity to make some noise for the Owls over the next few years, include Class of 2017 signees:

RECRUITING WILL BE KEY FOR THE OWLS
Last Saturday's scrimmage and Junior Day was indeed special – and gave the South Florida athletes a chance to see the program firsthand.

On a day where the University of Miami was having a scrimmage, and the popular Florida Relays were going on in Gainesville – FAU may have pulled the biggest haul and bridged relationships in these two talented counties even closer.

"The problem in the past is FAU never felt that they could be in play for athletes from South Florida," said Miami Carol City first-year head coach Benedict Hyppolite. "But with Coach Partridge, and now this group, they feel they can stand toe-to-toe with anyone and attract prospects."

With a tremendous facility and a school that offers everything in the way of education, FAU has certainly opened its doors wide open to everyone – and that was evident last Saturday.

Coming off his first recruiting class, Kiffin played on the areas he was familiar with – in bringing in just three players from Miami-Dade and Broward. But when you looked around at who showed up on Saturday, you can tell that this is a program that is certainly in it to win it.

Besides Hyppolite and a number of his defending Class 6A state champion Chiefs, you had all the programs from coveted District 16-6A – aka the "SEC" of high school football. 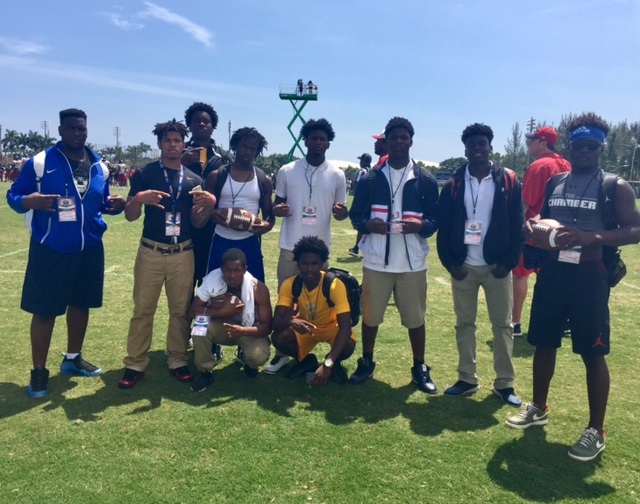 There was Northwestern, Norland and Central. They all came, checked out the facilities and watched the Owls scrimmage.

"Nice campus and a great facility," said highly-regarded linebacker Yasir Abdullah. "Some very good players out there as well."

The attraction for many of the players who came to check out the Owls was sophomore quarterback D'Andre Johnson. The one-time FSU commit, and easily one of the best in the country, is certainly everything as advertised – and Miami Central sophomore Maurice Underwood recognized that right off the bat.

Underwood, who was offered by FAU after his visit, was impressed at what Johnson brings to the table.

"You can tell – just by watching him for a few plays – that he is for real," Underwood pointed out. "He will really make that offense move."

Central also had a few prospects on hand, including Flanagan transfers Arthur Brathwaite, Devonta Wilson and Hunter Goetz, who is just starting to get the attention he deserves.

As veteran head coach Daryle Heidelberg brought some of his talented Norland Vikings to the Junior Day and scrimmage, he hopes that Kiffin and FAU start exploring the talent that South Florida churns out every year.

"In the past, FAU didn't do a lot of recruiting from our area," Heidelburg explained. "We often wondered how you overlook all that talent and watch them go to other schools. But hopefully that will change because we do have plenty of kids who would love to stay close to home."

The Vikings had quarterback Alec Carr on hand among others.

The program that truly has turned things around is Northwestern. The Bulls currently have the only player in Miami-Dade County, committed to FAU (quarterback Tutu Atwell), and brought several key athletes to Boca Raton on Saturday.

"Very nice campus and a lot of good players on the field," Wildgoose said. "There were a few players from down in our area. It's good to see that."