Because the trade deadline is now just a mere days away and things are really starting to heat up, we're going to start swinging for the fences with our hypothetical trades.

Things were relatively quiet until Sacramento showed its infinite amount of ineptitude when it shipped Demarcus "Boogie" Cousins to New Orleans for Buddy Hield, spare parts in the form of Tyreke Evans and Langston Galloway and a couple of draft picks.

They didn't even get any beads.

While Boogie will now join forces with "The Brow" aka Anthony Davis, creating the most intimidating and versatile frontline since San Antonio's "Twin Towers" of Tim Duncan and David Robinson, the heat has been turned up on the rest of the league to complete another drastic move.

Today's hypothetical deal could potentially send shockwaves through the league. It is a "blockbuster" deal that has been speculated about but has been said to need a third team to complete. 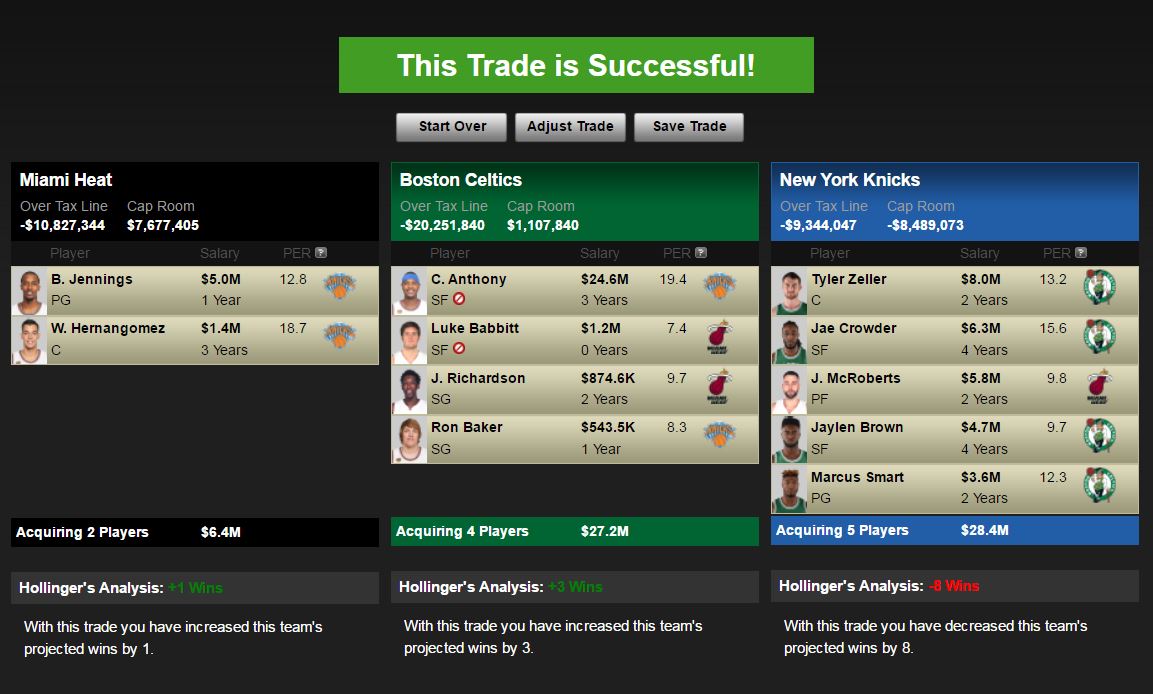 Miami helps Carmello Anthony leave the three-ring circus that has become the New York Knicks – facilitating the deal that sends Melo to Bean Town while netting a great backup point guard option and a young reserve center to develop.

Also included in this deal – but not pictured in the trade graphic – Miami will also acquire a second round pick from Boston.

The deal is chiefly centered on the Celtics and the Knicks, Miami just jumps in to help the monies match up and gets gifted a couple of players for helping out.

The Celtics have been one of the teams that have expressed major interest in acquiring Anthony. Boston GM Danny Ainge does have multiple draft picks – including what could end up being the No. 1 overall pick from the Brooklyn Nets – in his pocket as well as a plethora of young assets to move around.

But for this deal to work, he'd have to call Pat Riley.

There is a caveat with this deal – or any deal involving Anthony – he would have to waive his no-trade clause. Given the way things are going in New York right now, I'm sure he'd be amenable.

Getting in on this deal offers Miami multiple benefits.

First, the Heat get to dump Josh McRoberts. Any opportunity Miami gets to free itself from the underperforming "McBob" should be greatly appreciated. Because of his salary – $5.8 million – McRoberts will help absorb some of the cap space left over by Anthony's departure.

With this deal, Miami gets the backup point guard it currently lacks.

While Brandon Jennings has recently been dealing with a sore left Achilles, when he's fully healthy, he's a more than serviceable ball-handler that can have big nights – whether it be off the bench or as a spot starter.

Coming off the bench for New York so far this season, Jennings contributed eight points and five assists per night – down from his career average of 15 points and six assists, but in line with him only play about 20 minutes per game.

Jennings can be fiery and he's much tougher than his 6-foot-1, 170-pound stature dictates. Better yet, he is only working under a 1-year, $5 million deal – so he would not cut into the massive amount of cap space the Heat are about to inherit unless they wanted to re-sign him this summer.

Jennings would assume the role of primary distributor off the bench since the other part of this deal probably forces Miami's James Johnson into the starting lineup.

Johnson would likely become a starter because Luke Babbitt, a starter almost by default, would get sent to Boston along with Heat youngster Josh Richardson.

Babbitt is a valuable trade chip because he carries an expiring contract. Richardson, who has also battled minor injuries recently, also carries weight because he has the upside to become a solid rotational "three and D" wing player if continue to work on his game and everything goes in his favor.

Where Miami would also benefit by aiding this deal is the acquisition of 6-foot-11 Spaniard big man Willy Hernangomez.

Hernangomez has come on as of late. Over the Knicks' past 10 games, he almost averaged a double-double – nine points and eight rebounds – while coming off the bench.

He has flashed good potential – evident by his scoring 12 points and nabbing 4 rebounds in just nine minutes of work on Feb. 10 and his notching 16 points and 16 boards in a Feb. 1 win over Brooklyn.

And he's got the Miami dance club moves down pat already.

Even though Hernangomez is more of a traditional big man, wanting to do his damage near the basket – Miami could play him alongside Hassan Whiteside when going up against teams – ahem, New Orleans – that feature a bigger frontcourt.

Everyone is happy with this deal. Miami's core remains largely intact while strengthening its bench; New York gets some quality and a lot of quantity, and Boston gets a bonafide star to put alongside Isaiah Thomas and Al Horford.