The NFL Draft is just over three weeks away and draft boards are still fairly fluid since teams are still making moves in free agency and still conducting pre-draft interviews.

The Dolphins' draft board changed a bit with the re-signing of right guard Jermon Bushrod as well as the signing of offensive lineman Ted Larsen, who also has experience playing guard.

Those moves essentially shore up the offensive line – for now – and subtracts some of the pressure for the team use a higher draft pick on a big man for the offensive front.

Miami also took a step forward with its defensive backfield by signing former Raiders safety Nate Allen and former Rams safety T.J. McDonald both to 1-year deals. Both are serviceable veterans that can contribute positively, the only caveat with McDonald is that he will be suspended for the first eight games of the 2017 season.

So now, drafting a safety has become more of a luxury rather than a necessity.

This mock draft will be updated again prior to the NFL Draft (April 27-29).

Round One – 22nd Overall

The Dolphins have done a lot to improve their linebacker corps this offseason – re-signing Kiko Alonso and signing Lawrence Timmons away from the Pittsburgh Steelers.

But there is still a spot left open in the base three-man group.

Miami drafting Zach Cunningham at No. 22 hits a lot of check marks.

He fills a position of need, he is a player that has the tools to be a year-one impact player – if not a full-on starter as a rookie – and he is a "safe pick" in that he is a smart guy who should be a model citizen within the organization.

Cunningham's resume is quite impressive.

He's a freakish athlete, given his long frame and his 4.67 40 time. He also recorded 35-inch vertical leap and a 125-inch broad jump. Cunningham also turned those God-given gifts into on-field production.

As a junior, Cunningham led Vandy with 125 tackles and 16.5 tackles for loss. Those numbers earned him his second first-team all-SEC honor of his career as well as him being named a first-team Associated Press All-American.

Plainly, Cunningham is a playmaker.

He didn't have a lot of help overall on Vanderbilt's defense, so that made him almost relentless in his effort to make every positive play possible.

Though he played inside linebacker for the Commodores, Cunningham has the athleticism and range to be a plug-and-play outside linebacker in a 4-3 scheme – roaming sideline to sideline for tackles and being solid in pass coverage.

He plays downhill and does a good job of shooting gaps to reach ball carriers in the backfield. He always seems to be around the ball and when he makes a tackle, he delivers a "pop" and will create fumbles – evident by the eight fumbles he forced in his career.

He can stand to get stronger – only posted 15 reps of 225 pounds at the combine – but there are zero health concerns that come along with Cunningham, another plus for a first round pick.

Cunningham would also upgrade the Fins linebackers' room because he offers position versatility. Where Timmons is great against the run and great at being a leader of the defense, Cunningham could shift inside on true passing downs along with serving as a pass rusher in hybrid formations. 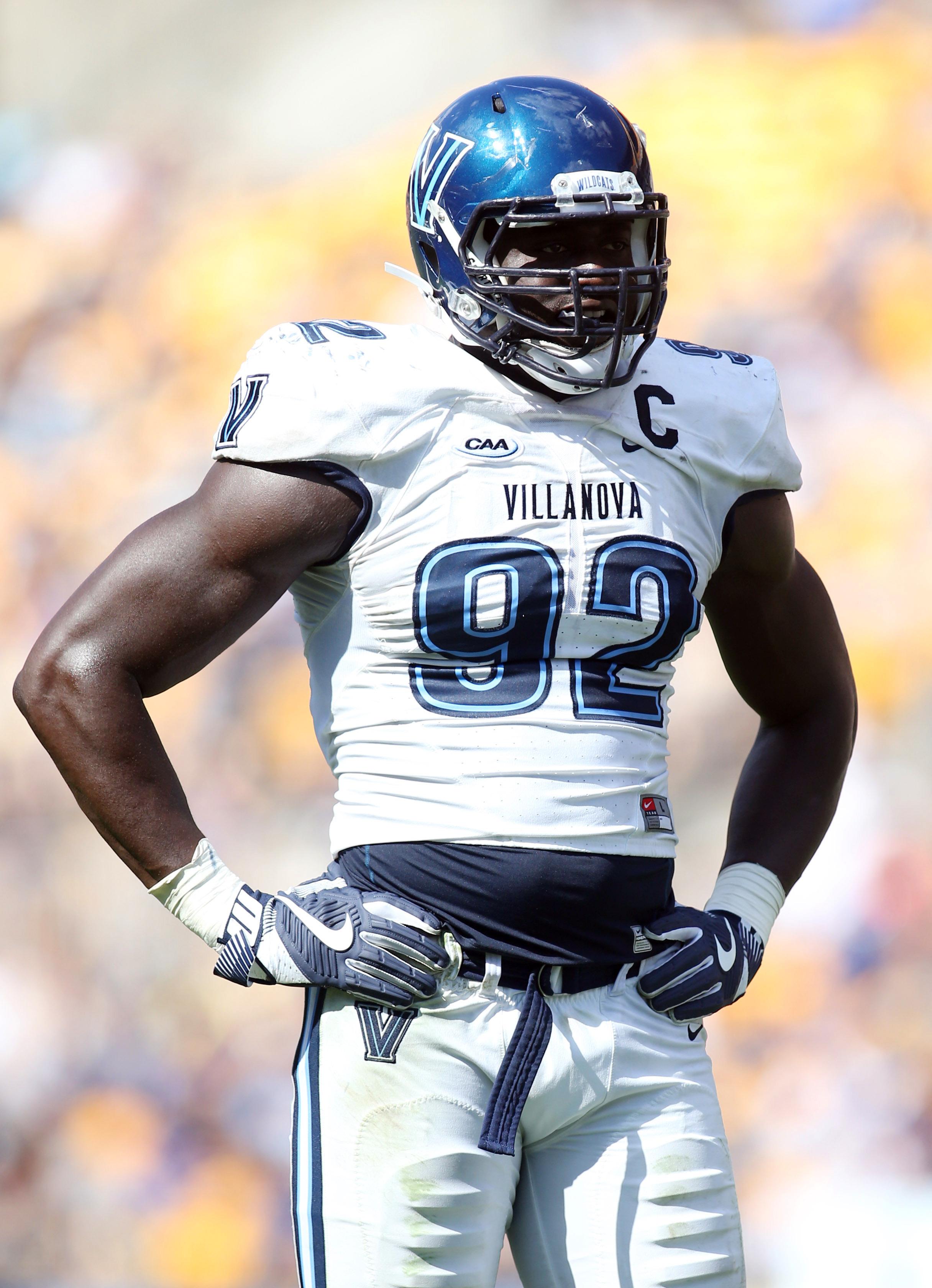 Even though Orlando "Big O" Alzugaray continues his campaign for the Dolphins to draft Michigan defensive end and pass rusher Taco Charlton in the first round, I believe that waiting to the second round to target a pass rusher wouldn't be such a bad thing.

Villanova's Tanoh Kpassagnon (pronounced Tawn-oh Pass-n-yo) is an intimidatingly built human – standing 6-foot-7 and weighing a shade under 300 pounds – and he's an athletic unicorn with his 4.8 time in the 40.

Charlton has consistently been given first round grades, however many scouts think that he's not truly ready to be a year-one impact player. Waiting and taking Kpassagnon in the second round allows the Fins to address another position of need in the first round while still taking a physically gifted player that may or may not be ready to contribute as a rookie in 2017.

Even though he comes from FCS school Villanova, Kpassagnon's production over the past two years is hard to ignore.

There's still plenty for him to learn as a pass rusher and there may be a bit of learning curve since he played against FCS-level on a weekly basis.

Miami's year-one plan for Kpassagnon should be for him to learn under Cam Wake and the coaching staff and be a situational pass rusher as well as special teams weapon used for blocking kicks with his vertical leap and extremely long arms.

Once again, this mock has the Dolphins waiting until the third round to address its need at cornerback.

It's not to say that Miami's need at corner is less significant than the other two positions addressed in the first two rounds, it's just that the defensive back talent pool is a bit deeper this year and there are still quality players to be had on the second day of the draft.

Coredrea (pronounced Cor-dray) Tankersley has the ideal physical traits that teams look for in a "No. 1 lockdown" cornerback.

Standing 6-foot-1 and legitimately running in the 4.4 range, "Tootie" Tankersley could very well be gone by the time Miami gets on the clock in the third round, it all depends on how many other defensive backs are taken ahead of him.

Tankersley was a two-year starter for Clemson, leading the team in passes defended (11) and intercepting four passes this past season as the Tigers won the national championship.

He was a first-time all-ACC performer in 2016 as well as being named a third-team AP All-American. Fans with a keen eye will remember Tankersley put some serious clamps on Virginia Tech's receiver Bucky Hodges during the 2016 ACC Championship game.

If drafted by the Fins, Tankersley would instantly be the team's most gifted defensive back. As a third round pick, Tankersley would spend some time on special teams in addition to working in the nickel and dime sets, but he has everything he needs to become a No. 1 boundary defender by his second year.

Because Miami addressed its offensive line needs – namely new left and right guards – the team can now sit back and take a comb through the later rounds for the best lineman available at a given time.

At this point, a team is looking for guys who can come in and raise the level of competition at their position – with a best case scenario of developing into a starter or ultimately providing quality depth.

Utah's Isaac Asiata, the cousin of Minnesota Vikings running back Matt Asiata, is a big-bodied interior lineman that has shown great power and above-average athleticism when he's on the move.

Asiata has been described as an "effort guy" – a good label for an offensive lineman to have. He does a good job of delivering the first blow on defensive linemen and blitzers and he is strong enough to uproot bigger nose tackles to open running lanes.

Another plus with Asiata is that he's positional versatile – having played both guard spots as well as being a spot-duty center. Players like that always find a way to stick on rosters.

Some might call this pick a reach, others might call it a "wish pick" because the player will be gone long before this pick – depends on who you talk to.

Because of the varying opinions on Josh Reynolds, I think he would definitely be available during Miami's second pick of the fifth round and I believe that he would offer great value at this point in the draft.

Reynolds is a 6-foot-3 speedster or sorts. Even though his 4.52 40 time at the combine – reportedly also ran 4.52 at the Texas A&M pro day – wouldn't classify him as a burner, Reynolds plays fast and routinely got behind defenders during his time with the Aggies.

He was a triple jumper and high jumper in high school, and while Reynolds still needs some polishing as a route runner – he can find a way to make an impact in the Dolphins offense sooner rather than later with his ability to take the top off a defense as well as his being a dangerous red zone target.

If Reynolds is still on the board for Miami's pick at No. 166, it wouldn't be a bad thing to take him then and wait for Asiata. 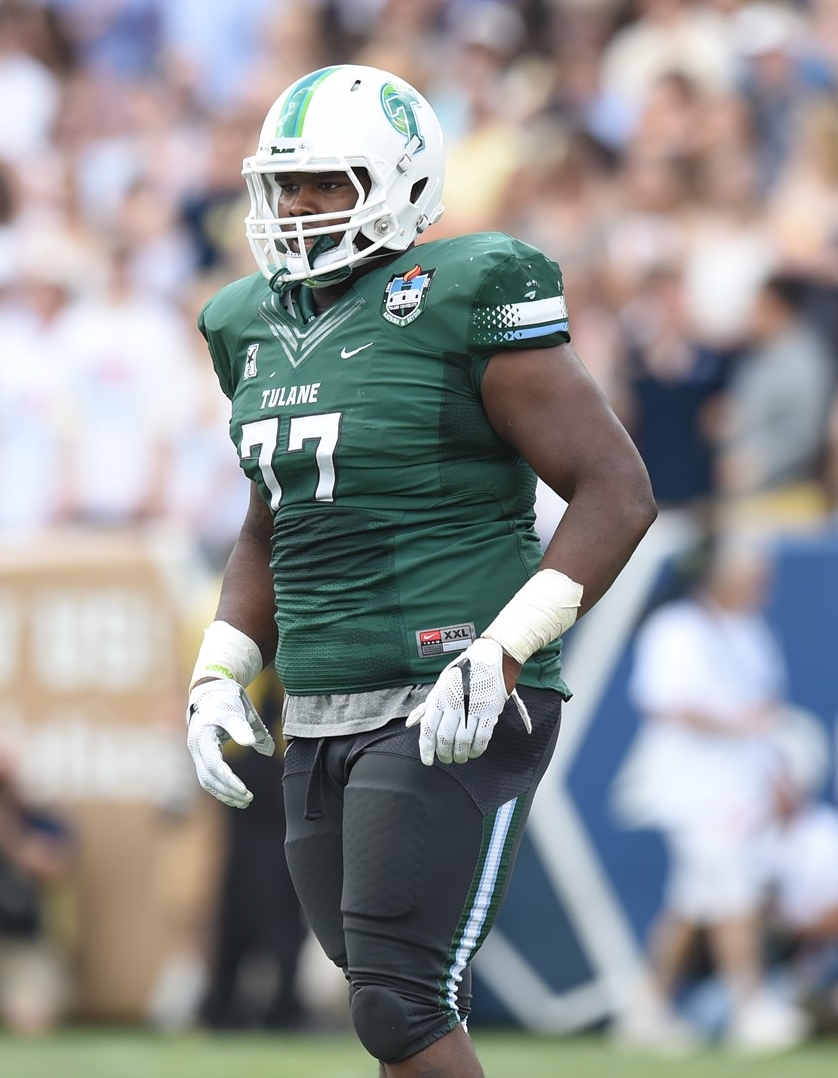 A repeat player from the 1.0 version of the mock draft, but this time taken a bit later in the same round.

Despite his coming from Tulane, Tanzel Smart was a highly effective defensive tackle that showed the ability to anchor in against the run as well as rush the passer.

He racked up 40 tackles for loss and nine sacks in three years of work and was a two-time All-American Conference first team honoree.

Smart, like Kpassagnon, could offer great value as a situational/rotational pass rusher in his rookie season – while he learns the NFL game from one of Miami's great vets, in this case Ndamukong Suh.

Still believe that if Smart did better on the "eye test" that he would be drafted higher. Either way, he can help the Dolphins.

This is one pick that I doubt I back off of leading all the way up to the draft.

Mocked Ben Boulware to Miami in the 1.0 version because it makes too much sense.

Players drafted at this point have to have great intangibles if they want to stick to a roster. Not only that, they have to be ready to make their bones on special teams.

That is Boulware in a nutshell.

Boulware is a great leader – he was a two-time team captain for the Tigers – and he's a very productive player even though he doesn't possess the physical tools that other players may have.

The proof is in the pudding. His 198 tackles, 19.5 tackles for loss, four sacks and two interceptions in two years lets you know he can play the game of football and knows how to get himself in position to make a play.

And he spent his first two seasons at Clemson working predominantly on special teams.

Boulware just may be the second coming of Larry Izzo.