Sam is centered well offshore in the Atlantic Ocean, about 610 miles east of the Northern Leeward Islands and is traveling northwest at 9 mph. 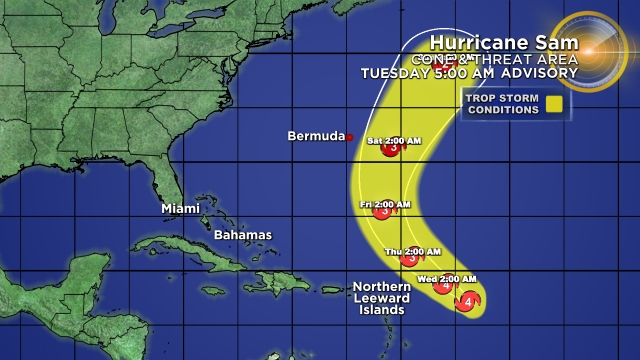 Sam is forecast to continue moving northwestward and stay away from the Lesser Antilles.

Sam is expected to become a Category 3 later this week as it moves northward and then will turn towards the NE away from Bermuda.

The CBS4 Weather team is also tracking a few other disturbances in the tropics.

A broad area of low pressure located several hundred miles southwest of the Cabo Verde Islands has a high potential of cyclone development over the next 2 to 5 days.  Environmental conditions are conducive for further development, and a tropical depression is likely to form during the next day or two while the system moves westward to west northwestward at 5 to 10 mph over the central tropical Atlantic.

A tropical wave located over the far eastern tropical Atlantic several hundred miles southeast of the Cabo Verde Islands also has a high potential of cyclone development over the next 2 to 5 days. Upper-level winds are conducive for gradual development, and a tropical depression is likely to form in a day or two while the disturbance moves westward to west-northwestward at 10 to 15 mph over the far eastern tropical Atlantic.

There is also a well-defined low-pressure area associated with the remnants of Peter is located a few hundred miles east of Bermuda. The shower and thunderstorm activity associated with this system has become less organized since early Monday.  Although strong upper-level winds are likely to prevent significant development, this system could still become a short-lived tropical depression later today or tonight while it moves northeastward at about 10 mph.  By Wednesday, however, conditions are expected to become unfavorable for further development.