Possessing a 50-49 lead at halftime, the Miami Heat had to be experiencing mixed emotions against the visiting Thunder. On the one side they were leading despite Oklahoma City scoring 14 points off 12 Miami turnovers. On the other, big man sensation Hassan Whiteside was questionable to return after leaving the game in the second quarter with an ankle injury after registering 10 points in 11 minutes.

Whiteside would not return, the two teams traded punches until the final minutes, and the Heat couldn't overcome their 19 turnovers as the Thunder checked out of Miami with a 94-86 win, plunging the Heat's home record to 7-13 this season.

Despite an abysmal 9-for-24 shooting from the field, including 0-for-8 from behind the arc, the NBA's reigning MVP boosted the Thunder in other areas, providing eight rebounds, eight assists, and four steals along with his 19 points.

The Thunder reserve lit up the Heat's defense connecting on 7-of-9 shots. Jackson also had the highest plus-minus of the game with a plus-17 in 26 minutes.

Not having Whiteside stung the Heat on both ends, but Wade continued his stellar offensive play this season with 18 points and six assists on 8-for-18 shooting. 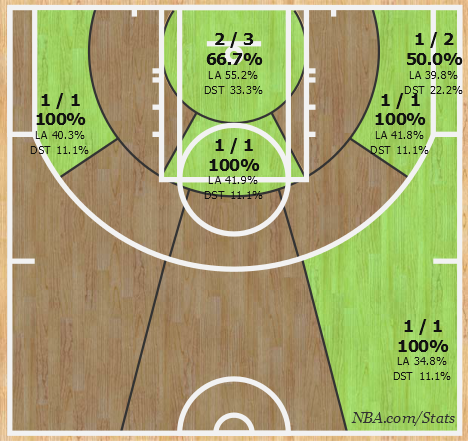 Stat of the Night: Kevin Durant was 0-for-8 on 3-pointers, marking the third time of his career in which he shot eight or more threes in a regular season game and missed them all. The other two occurrences were losses.

"You have to find a way to overcome it. Sometimes we do. Hassan being out had nothing to do with turnovers and our empty possessions and not being able to get into offense cleanly." -- Heat coach Erik Spoelstra

Up Next: Miami travels to Charlotte tomorrow to take on the surging 17-25 Hornets, winners of seven of their last 10 games. Although the ankle sprain is not severe, Spoelstra said it would be unlikely Whiteside travels with the team.