MIAMI (CBSMiami) – What started as a small plan mushroomed into a massive outpouring of help as strangers from Coral Springs and beyond are donating supplies to help flood victims in Texas.

"It started out with two of us going, and just taking my truck and his truck and a boat and going out to help to see what we can do," said A.J. Poulin, a coach for the Coral Springs Chargers. "And now it's turned into massive donations of all kinds of stuff – box trucks, many boats. Twenty people, 20 to 30 people, are going with us. It's been a big outpouring of support from Coral Springs."

The group will continue collecting donations Wednesday and Thursday from 9:00 a.m. to 10:00 p.m. at Mullins Hall in Mullins Park.

Poulin said they're collecting bottled water, canned goods, toiletries, clothes and anything people can donate that will help Hurricane Harvey victims get back on their feet. Organizers said they could use more bottled water, diapers, baby formula and bottles.

The volunteers are scheduled to take off for Texas Friday evening. They'll join South Florida Red Cross workers who loaded up a canteen truck Tuesday in Fort Lauderdale and Miami and headed for southeast Texas. Several more from West Palm Beach will join the caravan of relief.

Empty containers are headed to a staging area in Louisiana where Red Cross volunteers will fill them with meals to deliver to displaced flood victims.

Dozens of Coast Guard personnel from Florida are in Texas too.

The Coast guard is working with Sawgrass Recreation Park to use two of their airboats to help with flood rescues. Volunteers leave Tuesday evening.

More than 100 officers from Florida's Fish and Wildlife Conservation Commission, hauling dozens of boats, are now helping tens of thousands of stranded residents.

"It's definitely one of the worst disasters we've seen," said Cindy Imperato with the Red Cross. "It's still raining. It's still flooding so they haven't had any breaks."

Something else arriving for flood victims is free phones and wireless service courtesy of Q Link Wireless in Dania Beach - a major provider of phone service for low income families.

No one understands a hurricane disaster better than South Florida, which is why local agencies geared up to help and are asking for donations. 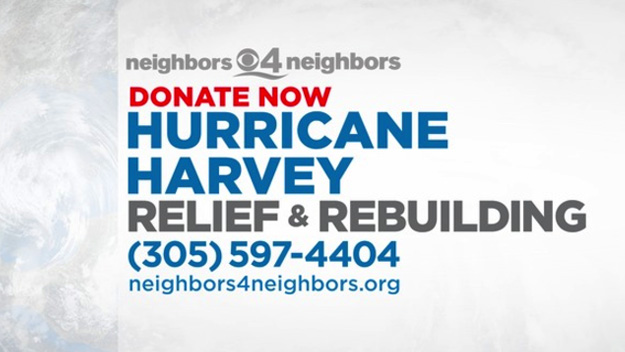 The agencies include CBS4's Neighbors4Neighbors, the United Way of Miami-Dade, the Greater Miami Jewish Federation and the Catholic Charities of the Archdiocese of Miami.

Houston Mayor Sylvester Turner put together a Hurricane Harvey Relief Fund through the Greater Houston Community Foundation. If you would rather send a gift to help aid Houstonians, a list of acceptable items and instructions can be found here.

Houston Texans defensive end J. J. Watt has started a YouCaring page that takes donations large and small to put toward assistance for Houston. It has a goal of $500,000.

The Salvation Army also has an Emergency Disaster Services arm that is taking donations to help Harvey victims.

Portlight Inclusive Disaster Strategies is a group that helps disabled people. They are asking for donations as they work to help older adults and those with disabilities in the flood zone.

Catholic Charities USA has set up a page to aid in long-term recovery after the Hurricane Harvey disaster.

Austin Pets Alive!, a no-kill animal shelter, has set up a website for donations in the wake of the hurricane and flooding. They're raising money to help shelters in the area.

Direct Relief is an organization working with local health and emergency providers, and you can donate to them here. They have already made $100 million worth of medical supplies available after the disaster.

The Houston Food Bank has said they are providing disaster relief. You can donate here.

The Texas Diaper Bank works to meet the basic needs of babies, disabled children, and older adults. They said they are in need of cash and diaper donations to help families displaced due to flooding and hurricane damage–you can donate here.