MIAMI (CBSMiami) -- Four states accounted for 40% of new COVID-19 cases last week, with one in five coming from Florida.

Cases are rising across the nation as the more transmissible Delta variant spreads and ends months of steady decline that began when widespread vaccinations became available.

In Florida, the number of vaccinations administered per week has fallen by almost 80% since April. In addition, Florida now has the fourth highest per-capita hospitalization rate in the U.S., behind only Nevada, Missouri, and Arkansas. Almost all COVID deaths and hospitalizations nationally in recent weeks have been among the unvaccinated.

The number of reported cases in Florida nearly doubled last week, from 23,000 to more than 45,000, according to the Florida Department of Health. There were also another 59 reported deaths, and a state new case positivity rate stands at 11.5%.

Despite Miami-Dade County's 75% vaccination rate, there were 7,052 newly reported cases last week and the county has a 7.4% new case positivity rate.

Monroe County, with a 69% vaccination rate, added 94 new cases last week and has an 8.1% positivity rate. 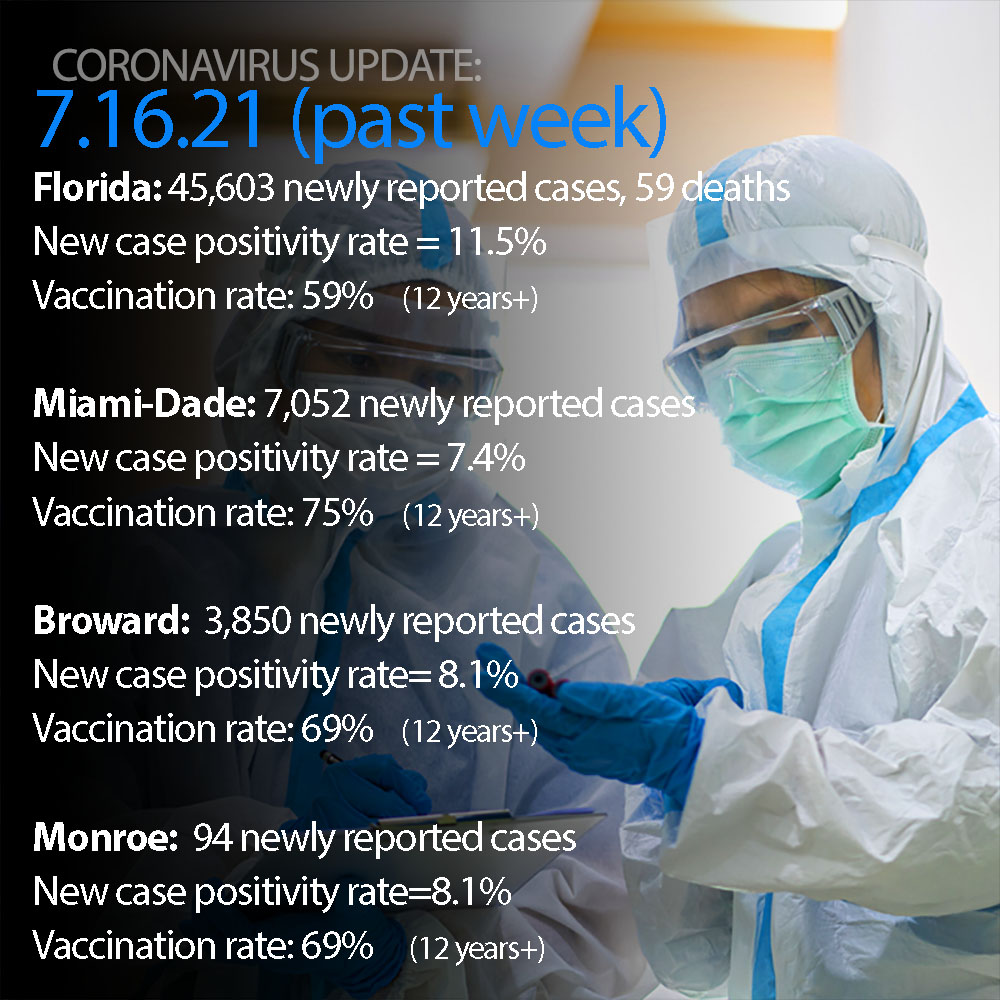 Dr. Shamarial Roberson, the state's deputy health secretary, said Friday the case increase is mostly among younger people who are less likely to be severely affected.

Gov. Ron DeSantis reiterated that even with the increasing cases, there will be no mandates requiring vaccinations, masks, or social distancing. He has pushed for the state to be fully open.

At an Orlando new conference, DeSantis blamed the new outbreak on the disease's seasonal pattern.

"We knew it was going to be low in May and it was. And we knew that at the end of June and July it would go up, because that's what happened last year," said DeSantis, who has been vaccinated.

But according to Jason Salemi, a University of South Florida epidemiologist, Florida reported 20% of the nation's new coronavirus cases over the last two weeks even though it makes up just 6.5% of the population. He and other epidemiologists and doctors interviewed blame the spike on the state's slowing vaccination rate, a decrease in mask wearing and social distancing and the delta variant, according to the Associated Press.