CAPE CANAVERAL (CBSMiami) — An explosion on the launch pad were followed by blasts that could be heard and felt for miles.

The SpaceX Falcon rocket erupted into flames during a routine rocket test as it prepared for a Saturday launch. Both the rocket and payload were destroyed.

The explosions vibrated homes and businesses miles away.

"It shook, it shook," said Dennis Watkins. "We're like, what the hell just hit us?"

Watkins works at the Titusville Chamber of Commerce on the other side of the intracoastal from the launchpad. When he felt the building shake, he didn't know what to think.

"It was reminiscent of the shuttle days, the sonic boom when the shuttle would come in. And we thought it wasn't the shuttle, it retired."

On board was a satellite that Facebook planned to use to help people who live in Africa and the Middle East connect to the internet. Facebook Founder Mark Zuckerberg is in Africa, where he posted his disappointment. 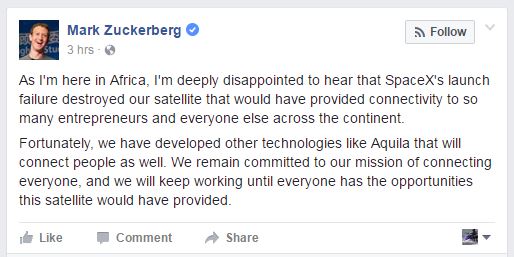 Social media captured the thick black smoke that drifted from the explosion.

Witnesses saw a fireball and houses shook after a #SpaceX unmanned rocket exploded on the launch pad. pic.twitter.com/uXU1vacMid

Whole office shook a bit ago. Reports of explosion at #SpaceX / #NASA Kennedy Space Center. Hope everyone is okay! pic.twitter.com/fse1taFm85