Ah, to be in your 30s. That's when the insecurities from your 20s have mostly vanished, and most people have established their identities and their purpose in life. And what better way to meet more like-minded, kindred spirits, than to flock down to the bars where you can find others who share the same outlook and the same number of years on earth. Here are a few bars where you can find a more respectable crowd who doesn't need to gyrate their hips in order to command attention, well, at least not while they're sober.

Happy hour Mondays draws quite a crowd because that's when drinks and food items are all half off from 5 to 9 p.m. and because of its location near downtown Miami surrounded by high-rises filled with lawyers and young professionals, the crowd tends to be in their mid-30s and early 40s. Just as the name suggests, Blue Martini features 42 different types of martinis from the "perfect pear" to the "green apple" martini. But sip them slowly, these cutesy drink can set you back a small fortune.

This bar refers to itself as "a piece of Ireland on South Beach." The proof of that becomes evident as you walk inside and you're greeted by hand painted murals depicting images from old country Ireland. And just as the name suggests famous Playwrights are plastered on the walls. The place gets crowded Sunday mornings when British and Irish ex-pats gather round the television to watch the soccer games. They also offer traditional British meals including Shepherd's Pie and Corned Beef and Cabbage. 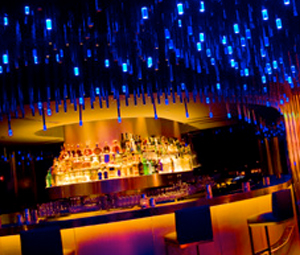 W Hotel
401 N Fort Lauderdale Beach Blvd
Fort Lauderdale, FL 33304
(954) 414-8308
www.starwoodhotels.com
The horseshoe-shaped bar is the focal point for this drinking establishment set against a mirrored black wall with brass barstools with aqua cushions in what they refer to as "signature Whiskey Blue style."We're not sure what that means, but it certainly sounds cool. That's basically the concept of this bar. It features aluminum Frank Gehry-designed tables and jasmine flowers releasing their nightblooming scents into the air.

For those who prefer to light up as they drink, the Florida Cigar Company offers a large selection of stogies from all over the world. The bartender is also trained to provide tips on which drink matches best with the cigar. The crowd is described as mellow and that may be because the televisions are always tuned to sports.

Upstairs at the Van Dyke Café

Jazz lovers often flock to hear the artists performing on the second floor of this popular restaurant on Lincoln Road. Frequent performers include Nicole Henry and the P-Lo Project. The décor has a classical style that's similar to a cabaret with small, round tables and intimate setting. The sound is pretty good in spite of the hustle and bustle of running the downstairs restaurant.