LOS ANGELES (CBSMiami/AP) – Stevie Wonder is the guest of honor Monday night at an All-Star Grammy Salute: "Songs In The Key Of Life."

The tribute to the piano-playing icon airs on CBS and includes performances from Lady Gaga, Beyonce, Pharrell and Annie Lennox.

Beyonce kicked off the taped event presented by the Recording Academy by walking up an isle of the Nokia Theatre L.A. Live and singing "Fingertips." Ed Sheeran joined the diva on "Master Blaster (Jammin')" and Gary Clark Jr. jumped in on "Higher Ground."

The night was full of collaborative highlights: A trio of India.Arie, Janelle Monae and Jill Scott shined like a seasoned girl group on "As"; Pharrell and OneRepublic's Ryan Tedder stretched their voices as high as possible; Babyface and Ariana Grande were soft on "Signed, Sealed, Delivered I'm Yours"; and Wonder's daughter, Aisha, sang the song written about her — "Isn't She Lovely" — with R&B singer Ne-Yo.

"I love you, Daddy," Aisha said, now standing next to her father who sat in the front row.

The rest of the night played like a love letter to Wonder.

Gaga said she remembered putting in her first CD into the CD player — a Wonder disc. "You truly are the reason that I'm here today. Thank you so much," said 28-year-old Gaga, who earned a standing ovation with her rendition of "I Wish."

Andrea Bocelli, who was impressive when he sang "I Just Called to Say I Love You," told Wonder and the crowd he assumed the song was "simple" to sing, but learned it wasn't.

"I did my best just to say I love you," the Italian tenor said, as the crowd was in awe.

Other performers included John Legend, Jennifer Hudson, the Band Perry and Tony Bennett, who delivered the goods on "For Once in My Life," and Lennox, who was top notch during "My Cherie Amour."

Even some of the presenters were musical: Tyler Perry sounded like a promising singer after delivering some of Wonder's lyrics, and actor-comedian Craig Robinson, who is also musician, also sang before he introduced a video of Wonder's silly side.

"Y'all clapped when Tyler sang," Robinson said to laughs.

Wonder ended the night with a medley of his songs and was joined onstage with all of the performers and presenters for "Happy Birthday," which happened after a video played showing Wonder campaigning to have the birthday of Martin Luther King Jr. become a national holiday.

Another video earlier in the night showed Paul McCartney calling Wonder "an incredible musician," ''genius" and a "total inspiration." 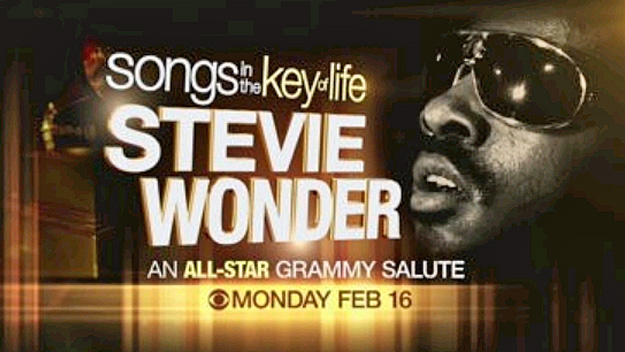 The special, taped after The GRAMMYs, airs Monday night at 9:00 p.m. on CBS, followed immediately by CBS4 News at 11 with Rick Folbaum and Irika Sargent.