NAPLES (CBSMiami) -- Tens of thousands of pounds of dead fish were removed from a bay in southwest Florida. 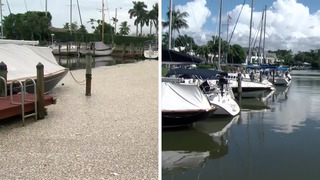 People who live in Naples say the smell was overwhelming and some of the fish were still alive and gasping for oxygen.

Naples officials believe the deaths are possibly caused by red tide that leads to a lack of oxygen in the water and a thick gooey substance that clogs the gills of fish.

A contractor hired by the county used nets to clean up the mess.

So far, they collected more than 32-thousand-pounds of dead fish.