Spring in South Florida not only brings slightly cooler temperatures and reduced humidity, it also signals the clarion call of a brand new theater season. Some of the finest musicals Broadway has to offer, as well as new plays with biting humor, will grace the stages of the area's finest facilities, offering something for every taste.

Though it has recently been made into a film starring Hugh Jackman, Russell Crowe and Anne Hathaway, there is nothing like the original. Written by French novelist Victor Hugo and published in 1862, 'Les Mis' or 'Lez Miz,' as it is nicknamed, appeared in musical form for the first time in 1985, and has been a global sensation since 1987. Set in 19th century France, the musical tells the story of Jean Valjean, a muscular French peasant who desperately seeks redemption for serving 19 years in prison after stealing a loaf of bread for starving family members. He is inspired to break his parole by a kindly bishop so he can begin his life anew, but is hunted down by police inspector Javert while being swept up in the French Revolution.

Written by Evan Smith and referred to by the New York Times as a "southern version of the 'Golden Girls,'" this play is a southern comedy infused with equal parts wit and wisdom, blessings from on high and damnation to the depths of purgatory. It takes place in the home of two Catholic sisters who find themselves in the midst of a verbal jousting match with a door-to-door evangelist. No controversial stone is left un-tossed, as they debate religion, faith and morals in Savannah and beyond. 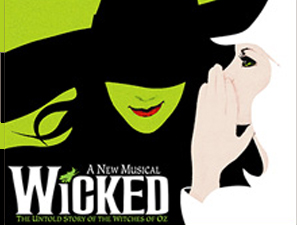 Long before Dorothy and Toto ever set foot in the wonderful land of Oz, two girls met and forever defined the concept of good and evil in Munchkinland. One girl is born with great intellect, a passionate heart and emerald green skin, while the other is quintessentially beautiful, brilliant and popular. In what has become a tremendous Broadway musical hit and the winner of over 35 theater awards, audiences get to witness the eventual growth of the two into the Wicked Witch of the East and Glinda the Good Witch.

Based on the 1983 Paramount Pictures film of the same name starring Jennifer Beals, this is the musical adaptation that includes more songs and even more electrifying dancing. It explosively tells the story of Alex Owens, a Pittsburgh steel mill worker by day and bar dance diva by night who dreams of crossing over to legitimacy by making the grade to get into Shipley, a local ballet academy.

Based on the original 1964 movie produced by Walt Disney and starring Dick Van Dyke and Julie Andrews from the children's books of P.L. Travers, the musical fuses elements of both, bringing to the stage such unforgettable hits. The songs "A Spoonful of Sugar," "Supercalifragilisticexpialidocious," "Feed the Birds" and "Let's Go Fly A Kite" are performed while telling the story of what can happen when children set the specifications for hiring a new nanny, complete with kindness, a good imagination and the ability to fly.

Related: Best Dance Studios In Miami
Glenn Osrin is a journalist and seasoned consumer products sales professional living in Miami, Florida. A new vegan, his most recent assignment is writing about the benefits of a plant-based diet and lifestyle while learning about the Miami vegan community. His work can be found at Examiner.com.