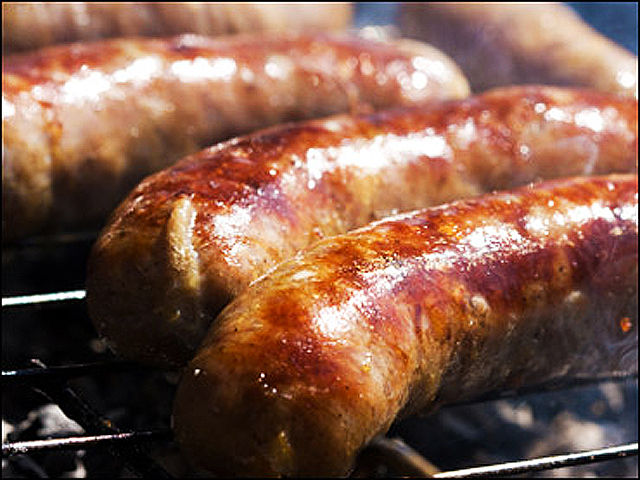 (Health.com) Everyone loves a good barbecue - especially to commemorate the Fourth of July - but research has shown that grilling meats at high heat can cause the carcinogens heterocyclic amine (HCA) and polycyclic aromatic hydrocarbons (PAHs) to form.

And it's not an insignificant amount. One study found that people who consume well-done meat - grilled, barbecued, pan fried, or broiled - on a regular basis were 60 percent more likely to get pancreatic cancer. Longer cooking times might also increase the risk of stomach, lung, and breast cancer.

But you don't have to give up your burgers for your July 4th barbecue just yet. From our friends at Health.com, here are six tips to make grilling safer...

A 2008 study found that spicy marinades can decrease HCA formation, so don't be afraid to sprinkle on the red pepper.

Certain spices are packed with antioxidants that will help to eliminate HCAs in the grilling process. One study showed that adding spices, such as thyme, sage, and garlic, can reduce the amount of total HCAs by 60 percent compared to the control.

Rosemary may be especially potent. A recent study found that high concentrations of rosemary extracts may reduce HCAs by up to 90 percent in some cases. Get inspired by these marinated meals.

At your next barbecue, don't forget beer and wine...for your marinade. We know red wine is full of antioxidants, and this can carry over in your marinades.

Marinating beef in red wine for six hours before grilling decreased the amount of carcinogens - 40 percent fewer than in beef that wasn't marinated - according to a study by the University of Porto in Portugal.

Turn down the heat

Well done shouldn't be in your vocabulary if you're trying to cut down on carcinogens. Studies have shown that higher temperatures lead to an increase in HCAs.

Allow some extra time, and try to cook your meat below 325 degrees F, which is the temperature at which HCAs begin to form.

To ensure that you're meeting the minimum cooking temperatures, invest in a meat thermometer, and make sure your burgers have an internal temperature of 160 degrees F.

Precook food in the microwave

Before your fire up the grill, nuke meat in the microwave for one or two minutes at medium power. Studies have shown that microwaving meat for two minutes prior to cooking decreased HCAs by 90 percent . Just remember to throw out the juice: That's where the HCAs lurk.

Grilled veggies offer that same hot-off-the-grill taste but don't contain carcinogens like their meaty counterparts. Portobello mushroom burgers are a great hearty option. However, if you crave grilled meat, make kebabs. Using half meat, half veggies is healthier and cuts down on the HCAs.

Less is more when it comes to marinating

Play it on the safe side by aiming to marinate your meat for no more than a few hours. Marinades don't soak deep into the meat, so there's not a lot of flavor advantage to an overnight marinade. And brushing a little extra sauce on the meat shortly before serving could give you an extra boost of antioxidants.

More from Health.com: How to make grilling safer