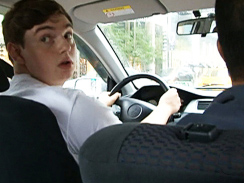 One of the perennial hottest topics on CBS MoneyWatch is The Perfect Car for a Teenager, by Stacey Bradford, a post I suggested for my own selfish reasons when I was deep in discussions with my newly licensed teenage daughter about what wheels I should buy her, if any. (The "if any" was my addition to the conversation; it never occurred to her.) Most of the 115 commenters agreed that the key considerations in choosing a car for a teen were cost (meaning used, or leased) and crash survivability. More recently, I put the question to Mike Quincy, Consumer Reports' automotive editor, who strongly suggested that most of that received wisdom was just plain wrong.

Get the Kid a Beater

@johnhassel wrote in a comment to the original story, "I think the best cars for teenagers are old junkers. They teach appreciation." And it makes sense, on the surface. New drivers tend to bump into things (I sure did at that age), and when they do, it's less stressful if the car already has a few imperfections. Plus, a well-used car is the least expensive form of transportation after shoe leather.

But for Quincy that was the wrong solution. Old cars lack the most important modern safety features. They don't have curtain air bags, which protect your kid's head in an accident. They don't have automatic braking systems (ABS), which makes sure the car doesn't lose traction even during panic stops, and they don't have electronic stability control (ESC), which keeps cars from skidding on sharp turns or slippery roads.

To get all of those, you'll need a car that has been built fairly recently. The Toyota Camry, for example, didn't get ESC even as an option until 2007.

Your Kid Should Drive a Tank

@Rgillam opined that I should "Buy them an old Cadillac or Lincoln or some such. The (first) requirements is (that it be) big -- so when (not if, since they will) they get into an accident they will survive." Putting the new driver in a bigger vehicle than the others he or she may encounter was a common refrain: In an accident, Darwinian as it sounds, you want your child to be the crusher, not the crushee.

But Quincy had little sympathy for that argument, especially since it tends to lead people to buy SUVs and pickup trucks for kids. "They have a higher center of gravity, so inexperienced drivers are more prone to rollover accidents" he said. "And because these vehicles are so big they take forever to stop." Yes, in a crash, the physics favor the passengers in the bigger vehicle. But it's safer to be able to avoid an accident in the first place, which is why Quincy prefers sedans with ABS, responsive steering and nimble handling. Short braking distances and stable emergency performance helps keep your kid out of trouble in the first place. "The most survivable accident," he said, "is the one you don't have."

Lease the Kid a Car!

@dmintonti asked "How about one of those $189 a month 36-month leases for a Honda Accord or Civic?" pointing out that you get a new car with all the safety equipment and reliability that comes with it.

Problem is, a lease is just about the most expensive way to buy a car most of the time. That's because you are essentially paying for the steepest part of the car's depreciation curve. Also, in many of the standard leases, the price is based on an aggressively high price point. If you were buying, you wouldn't pay the asking price. Why should you pay the lease asking price? And then at the end of the lease term, you own nothing; if you finance a purchase (or, better yet, pay cash), you can keep the car for the whole length of its useful life, if you choose, not just the most expensive first three years.

There is an ending to the story about my daughter's desire to get a car, by the way. She decided she'd be happy to drive her old man's Mini Cooper (#1 in its class in Consumer Reports avoidance maneuver test and in the Insurance Institute for Highway Safety's crash tests; and yes, it has ABS, curtain air bags and ESC). She asked that I save the money I would have spent on a car for her and put it towards her grad school tuition. Financially, you can't beat that. The cheapest car for your teen to drive, after all, is the one that's already in your garage.

And there was one unforeseen boon. Since she had to learn to drive the Cooper's manual transmission, she became the only girl-in fact, one of the only students--in her high school who could pound her way through five gears on the way to Starbucks. That's not as cool as a flashy new car, maybe. But it's pretty cool.

The Perfect Car for a Teenager
The Best Cars to Pass Along to Your Teenager
Auto Insurance: The Cost of Adding a Teen Driver