The cleanup, that started at 8 a.m., is part of a four-phase public safety effort that began in August amid numerous brush fires, and most recently a flood rescue in the area. 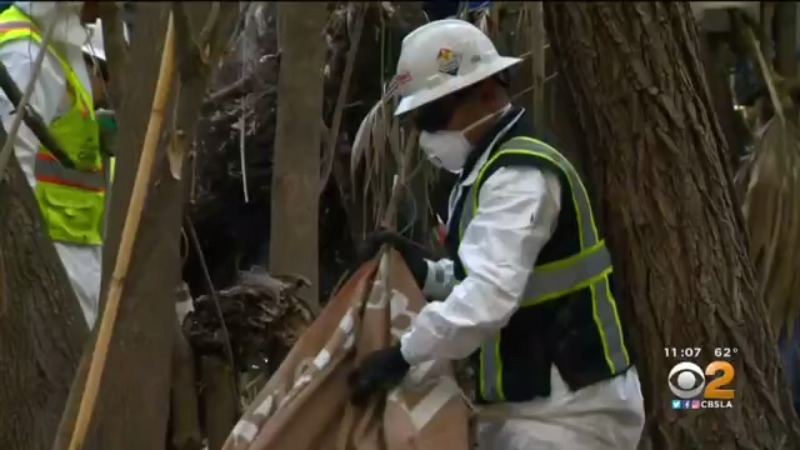 Hazmat crews in full protective gear started clearing the area of the many encampments in what could be a days-long effort.

Jackie Canez, who has lived in the basin with her boyfriend for six years, said she couldn't believe she had to leave the space.

"Depression, anxiety led us to the streets and we ended up staying here because we found a permanent spot," said Canez.

She tried desperately to find her cats Wednesday as the hazmat crews started clearing the encampment.

"They're going to come in and remove belongings that I can't move, he can't move, and I have two cats," Canez said tearfully.

According to local advocacy groups, at least 100 people may still be living in parts of the Sepulveda Basin.

Sanitation officials said the 34-acres being targeted near Encino Creek are the most dangerous to live in because of flooding and thick woods. Because the area is designated as parkland, a dusk to dawn curfew can be enforced.

"There's no access or very limited access," said Howard Wong with L.A. Sanitation. "Everything is by foot or existing fire roads and trails."

Efforts to relocate people and clear the basin have been heightened since dangerous fires in the area last summer. During one brush fire in July, propane tanks in an encampment exploded threatening firefighters.

When the cleanups began, a grenade was found in another camp prompting the bomb squad to be called in.

The Los Angeles Homeless Services Authority and the nonprofit organization LA Family Housing have been referring homeless people who have been removed from the basin to housing services.