HOLLYWOOD (CBSLA) — It's awards season in Hollywood, but you wouldn't know it by the way some of the industry's biggest stars dressed down for the all-virtual Golden Globes on Sunday.

Bill Murray and Jason Sudeikis have been the talk of social media since the Sunday night awards presentation for their very casual approach to one of Hollywood's glitziest nights – when there isn't an ongoing pandemic requiring people to keep a physical distance from each other and making indoor gatherings risky.

Sudeikis, still sporting his "Ted Lasso" mustache, wore a yellow, tie-dye hoodie and wild hair, and got a lot of support from fans on Twitter.

Meanwhile Murray wore a day-glow button-down print shirt that indicated the beloved "On The Rocks" actor had just been sipping a mai tai on a lanai. Actually, it was a martini that he used to toast Daniel Kaluuya for winning best actor in a supporting role for his performance in "Judas and the Black Messiah."

Don Cheadle toned his look down with a baseball cap and a wrinkled blue T-shirt, and Jeff Daniels looked to be in a nondescript hallway wearing a blue flannel shirt.

But the men weren't the only ones to strike a casual chord. Chloé Zhao, who became the first woman of color to win a Golden Globe for best director for "Nomadland," wore a green shirt, her hair in braided pigtails and a cozy beanie at one point, while Glenn Close wore a comfortable-looking plaid flannel with her dog lounging in the background behind her. 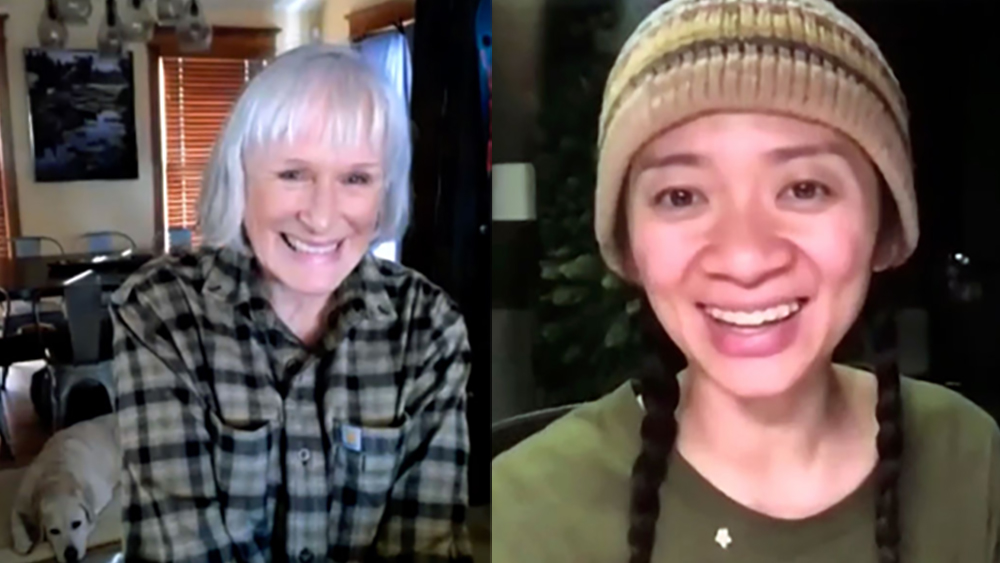 Sandra Oh, for her part, dressed for the snowy weather at her outdoor location with a green puffy jacket and dinosaur figures just behind her on what appeared to be a purple sled. However, it should be noted that her hair looked great.