SANTA ANA (CBSLA) - An ex-Drug Enforcement Administration agent from Orange County was arrested Tuesday on charges related to the insurrection at the U.S. Capitol, in which a mob of insurgents temporarily interrupted the certification of the election of President Joe Biden.

Mark Sami Ibrahim, 33, was on leave from the federal agency at the time of the Jan. 6 conflict but was carrying his agency-issued weapon, according to court papers, which indicate the probationary employee had given notice that he was resigning several weeks before the siege.

Ibrahim, who was arrested in Washington, D.C., is charged with entering the Capitol grounds with a firearm and lying to federal law enforcement officials, according to the U.S. Department of Justice.

Ibrahim arrived at the Capitol just after 1 p.m. Jan. 6 and posed for several photographs "in which he flashed and displayed his DEA badge and firearm" while standing among a group waving pro-Trump banners, according to an affidavit prepared by the Department of Justice's Office of the Inspector General.

Ibrahim was seen in another picture posted online that showed him carrying two flags, including one that read "Liberty or Death" with a star, known as the Troutman flag, and the other with red-and-white stripes with 13 white stars arranged in a circle, known as the Betsy Ross flag.

An online video showed the defendant "and a relative ... walking on the lawn of the Capitol grounds along the north side of the Capitol Building," according to the affidavit, which alleges that Ibrahim was corresponding with other law enforcement officers on the WhatsApp application.

Ibrahim's companion videotaped first responders taking away San Diego area resident Ashli Babbitt, who was fatally shot by law enforcement during the break-in, and Ibrahim "subsequently posted that video to the WhatsApp group chat," according to the affidavit.

The defendant later "climbed up onto the Peace Monument" on the Capitol grounds and "took a video of himself delivering a monologue, and ended the video showing the scene from on the Peace Monument," according to the affidavit.

During an interview with prosecutors in March, Ibrahim "denied that he displayed or exposed his DEA badge and firearm at the Capitol," according to the affidavit, which says the defendant said he heard "the tear gas canisters going off -- he said he heard the booms."

The defendant said he went to the Capitol with a relative and a friend, "who had been asked by the FBI to document the event, and that he went along with his friend to assist with that effort," the affidavit alleges.

The friend told investigators that Ibrahim "crafted this story about how his friend was at the Capitol to assist the FBI," the affidavit alleges. The friend added it was a lie to "cover his ass," according to the affidavit. 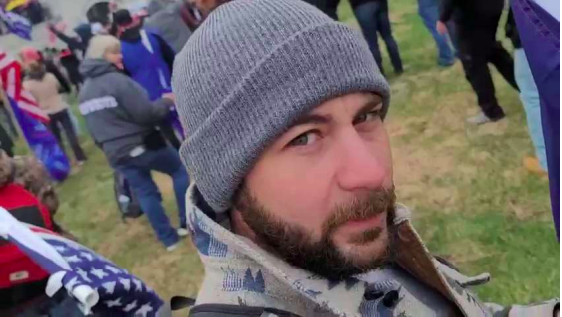 "According to Ibrahim's friend, Ibrahim went to the rally in order to promote himself -- Ibrahim had been thinking about his next move after leaving the DEA and wanted the protests to be his stage for launching a `Liberty Tavern' political podcast and cigar brand," the affidavit alleges.

The affidavit does not say where exactly Ibrahim lived but says he was from Orange County. The Los Angeles Times reported that public records indicate he once lived in Anaheim.

Ibrahim's attorney, Darren Richie, told the newspaper that the charges against his client were an overreach.

"Mr. Ibrahim played no role in any riot. He never committed any violence, attempted to enter any buildings nor induced or promoted others to do so. Further, Mr. Ibrahim remained honest and voluntarily cooperative with authorities," Richie said in a statement to The Times.

"Mr. Ibrahim has dedicated his entire life, with perfection, to the service of this country and its citizens whether through his military or law enforcement capacities," the defense attorney said. "This indictment results from conjecture, political pressure and a flawed attempt to paint a specific narrative through pictures taken wholly out of context."

Richie said his client is a "military veteran," who "looks forward to vigorously defending himself against every charge. The prosecutorial authorities, in this case, have clearly reached on this indictment with regard to Mr. Ibrahim's conduct, which at all times remained peaceful and docile; there is no evidence or allegations to the contrary."

Richie added that his client  "played no role in any riot. He never committed any violence, attempted to enter any buildings nor induced or promoted others to do so.  Further, Mr. Ibrahim remained honest and voluntarily cooperative with authorities. Mr. Ibrahim has dedicated his entire life, with perfection, to the service of this country and its citizens whether through his military or law enforcement capacities. This indictment results from conjecture, political pressure and a flawed attempt to paint a specific narrative through pictures taken wholly out of context. Mr. Ibrahim firmly believes the truth shall always prevail. Despite now having to defend charges that should never have been brought, he plans to loudly and widely share his truth to pronounce his innocence as well as his love for this country."