ESPN’s Stephen A. Smith came under fire Thursday for using a racial slur on Thursday's edition of First Take.

The comment happened during a discussion of whether or not Kobe Bryant will play in the Lakers season opener:

He’ll be just fine,” Smith said. “Opening night, Kobe Bryant is going to miss it because (his) foot is sprained? Are ya’ll crazy? N**** please.”

I realize over the past few years ESPN has been losing it’s credibility faster than A-Rod picks up chicks from his roster spot on the bench… but are we really supposed to believe we didn’t hear what we all just heard?

“I’m a New Yorker. I speak very, very fastly. … Sometimes my words are misconstrued and I get that,” Smith said in an explanation aired hours later.

Hmmm, Stephen, perhaps it’s not the speed at which you talk, but your poor command of the English language that has us all confused?

One more question for you though, Stephen… If you didn’t say the “N-Word” what exactly did you say, then?

A Cutler Above The Rest

We all know Quarter Back Jay Cutler will never win a Mr. Congeniality Award in the NFL – Drew Brees he ain’t.  But according to a Forbes Magazine poll the Chicago Bear is the least liked quarterback in the entire league!  Which actually means people like convicted dog killer Mike Vick MORE than they like Jay Cutler???? Now that’s harsh.  And clearly, Forbes doesn't know any of my dog-obsessed Facebook friends – but I digress.

Jay Cutler does, however, have a fan in NBA great Charles Barkley.  Barkley reportedly spotted Cutler and teammate Brandon Marshall dining at a Chicago steakhouse recently – and picked up the tab.  Well, Charles, maybe it’s easier to like Jay if you don’t have to play on his team.

Former Red Sox great Carlton Fisk was arrested this week for allegedly driving drunk.  Illinois Police say they found the catcher with an open bottle of vodka, slumped over the wheel of his pick-up truck which had been driven into the middle of a cornfield.

Rumor has it  - he was looking for Kevin Costner.

Fisk was charged with DUI and is due back in court next month.

The Many Beards of Baseball

It’s that time of year again when the two best teams in their league step up to the plate, take bats to the balls and swing for the stands to win the World Series.

Or what I like to call Freaky Facial Hair Month.

I realize baseball players are probably the most superstitious of all the ballers out there– and shaving the beloved cilium off the chin is a big no-no during the playoffs… and both Detroit and San Fran are equal offenders to the bizarre beards this year… But.  But.

One of your teams is about to win the NATIONAL CHAMPIONSHIP! Your photos will be snapped ad nauseum and those moments will now live on in digital infamy and you will all have prickly patches of fuzz sporadically strewn over your face!  Is that how you want to be remembered? Is it?

Frankly, I don’t know what to say about San Fran pitcher Brian Wilson.  I realize he is literally in a league of his own when it comes to wild whiskers.  He should just be thankful the team travels by private plane or I swear he would never make it through airport security.

Who do you think has the craziest hair in the World Series? Check out the photos and vote for your favorite facial filament!

Ah, and I bet you thought this was going to be an article about Mike Piazza. 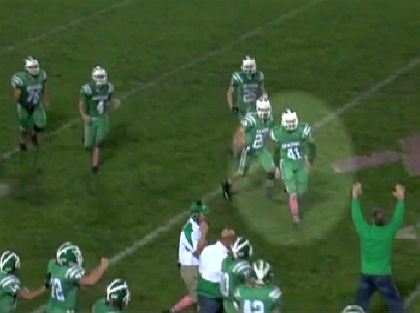 And in the feel good story of the week – Anthony Stargeo is a high school student from Brick, New Jersey.  He has Autism and was orphaned as a toddler. Starego lived in eleven different foster homes until he was finally adopted.

Last Friday night Starego became a local high school football hero. With just 21 seconds left on the clock and the game tied – he trotted out and kicked the game-winning field goal against the favored cross-town rivals.

For more fun check out That Thing You Missed:  LT Tackles Tebow with Relationship Advice