CHICAGO (CBS)-- Graduation rates at City Colleges of Chicago are up, yet enrolment at seven community colleges is dropping significantly.

Malcolm X College has a virtual hospital on the 8th floor, making it the best nursing program out of the city colleges. However, this means students may have to travel far distances to attend the school.

The teachers union president says that helps explain why enrolment has dropped across the city.

Gladys Ramos has not yet graduated from Juarez High School but already has nearly 30 college credits.

"I feel proud about myself and a well as my other classmates that also took advantages of these classes," she said.

Gladys and than 300 other public school students who have earned college credits were honored at Malcolm X today by Mayor Emanuel.

He touts this program as part of his effort to transform the City Colleges of Chicago.

Graduation rates are up.

The City Colleges have partnerships with big businesses. 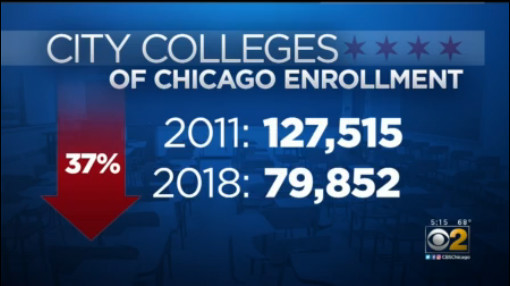 The president of the union representing City Colleges teachers believes   it is the mayor's decision to concentrate a field of study at each of the seven colleges that is hindering enrollment.

"It forces students to travel long distances and our students have basically responded to this policy by not attending the city colleges," Tony Johnston said.

Students near, say, Wilbur Wright College on the northwest side who want to study nursing have to travel 12 miles to Malcolm X on the west side.

"I come from Truman College where we had an outstanding nursing program and our enrollment just dropped precipitously after this happened," Johnston said.

The chancellor of the City Colleges points to the $252 million state-of-the-art virtual hospital at Malcolm X which he says it would be too expensive to duplicate elsewhere.

"Building a virtual hospital, which has given our students a competitive advantage," Juan Salgado, the City Colleges of Chicago chancellor, said. "We were unable to financially build a virtual hospital at seven colleges."

Johnston says he hopes to convince Mayor-elect Lori Lightfoot to re-organize the City Colleges so students can prepare for a variety of professions in each part of the city.