One of last year’s top fantasy receivers, Josh Gordon, is facing a season-long suspension, but there are still plenty of talented wideouts to choose from. These players are studs no matter the scoring system. Plus, a crackdown on overly physical secondaries could bolster this group’s production.

1. Calvin Johnson, Detroit Lions
2013 Stats: 84 receptions, 1,492 yards, 12 TD
Megatron is still the king of fantasy (and real life) receivers. No defense will ever forget about Johnson, but the acquisition of Golden Tate could deflect some attention away from him, and that’s a positive for his owners.

2. Demaryius Thomas, Denver Broncos
2013 Stats: 92 receptions, 1,430 yards, 14 TD
He’s the best receiver on the best passing attack in football. He can stretch the field—something he may have more chances to do this season—or turn Manning’s shorter passes into long gains. No receiver matched his 14 touchdowns last season. 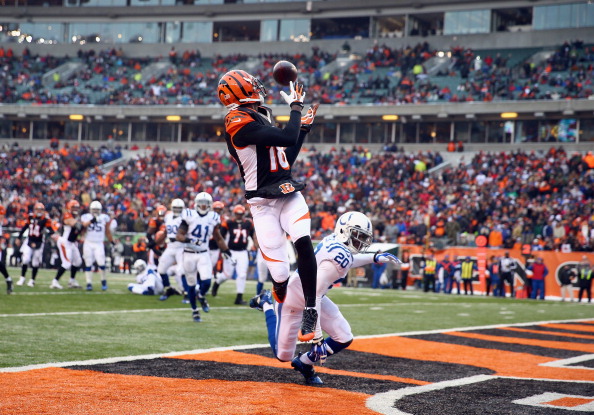 A.J. Green#18 of the Cincinnati Bengals catches a touchdown pass during the NFL game against the Indianapolis Colts at Paul Brown Stadium on December 8, 2013 in Cincinnati, Ohio. (Photo by Andy Lyons/Getty Images)

3. A.J. Green, Cincinnati Bengals
2013 Stats: 98 receptions, 1,426 yards, 11 TD
Several players can make a case for this spot, but Green is a virtual lock to have another huge year. He’s far and away Andy Dalton’s favorite target, and a major reason Dalton recently signed a big contract extension.

4. Dez Bryant, Dallas Cowboys
2013 Stats: 93 receptions, 1,233 yards, 13 TD
He rubs many people the wrong way, but he makes his fantasy owners happy, as evidenced by his 13 touchdown grabs last year.

5. Brandon Marshall, Chicago Bears
2013 Stats: 100 receptions, 1,295 yards, 12 TD
Marshall seems to be in a better place off the field—he has become an advocate for mental health awareness—and his production on it has improved as well. Even with a teammate threatening to crack this list, Marshall’s production should remain high.

6. Julio Jones, Atlanta Falcons
2013 Stats: 41 receptions, 580 yards, 2 TD
If he’s fully recovered from last season’s broken foot, he has the potential to be among the league’s most productive receivers, as Matt Ryan will target him often. 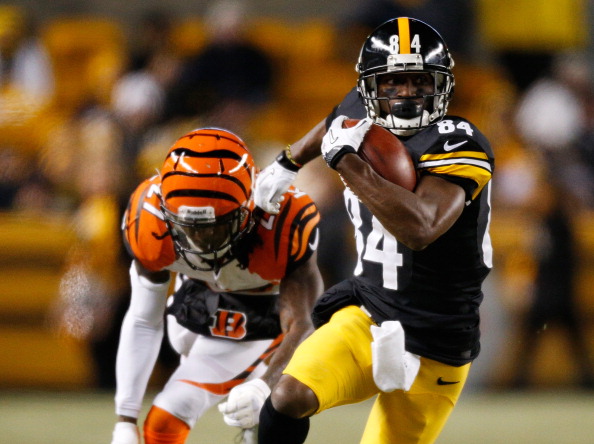 Antonio Brown #84 of the Pittsburgh Steelers heads up field after getting around the tackle of Dre Kirkpatrick #27 of the Cincinnati Bengals after a fist quarter reception at Heinz Field on December 15, 2013 in Pittsburgh, Pennsylvania. (Photo by Gregory Shamus/Getty Images)

9. Randall Cobb, Green Bay Packers
2013 Stats: 31 receptions, 433 yards, 4 TD
The Packers’ explosive pass offense nets them two receivers on this list. Cobb, you may remember, broke his leg last season but returned to catch the game-winner in Week 17 to get Green Bay to the playoffs. He’s been up and down in his short career, but expect another breakout season from him in 2014.

10. Keenan Allen, San Diego Chargers
2013 Stats: 71 receptions, 1,046 yards, 8 TD
Allen had a nice rookie year and has vowed to become more of a deep threat this season. He’s a risk in this spot, but could prove himself as an elite wideout.