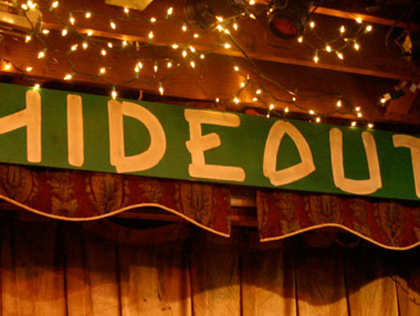 The Hideout is a venue that is relatively hidden, undoubtedly aged, and endearingly ramshackle. While it may be close to pretty much everything, it feels like it's in the middle of nowhere. The building dates to the 19th century, and has managed to maintain plenty of its original character. With its left-field location, its well-worn aesthetic and variety-packed entertainment appeal, The Hideout is an ideal escape from the noise of the city's well-beaten paths.

For both newbies and regulars alike, The Hideout is an abundantly friendly venue with great rustic appeal, a front-porch Americana vibe that is hard to find elsewhere, an ideal destination for a laid-back night of down-to-earth fun with a group of friends. It's a vibrant nugget of conviviality tucked modestly away on an industrial side street, with plenty to offer beyond the standard menu of amusement, and should be embraced for these virtues and more. Here are eight reasons why.

"Alternative Country" singer-songwriter Robbie Fulks performs every Monday night at The Hideout, usually with special guests. Fulks' 20-year career includes an early appearance on a Grammy-winning bluegrass album, a recent record of Michael Jackson covers, and a weirdly-begotten 15 minutes of fame involving a tweet by Drew Carey. He's not a big fan of the Nashville hit machine, and this is for the best.

The Hideout has expanded its live entertainment offerings to include comedy, and with positive results. The venue recently hosted the Chicago stop of the Portlandia tour (featuring SNL's Fred Armisen and Sleater-Kinnney/Wild Flag's Carrie Brownstein), which sold out in seconds and was probably quite enjoyable for the compact group who got to see it. The Hideout's Kind of Blue Comedy Series is hosted by Rhea Butler and happens on the first Sunday of each month, giving up-and-coming wits the chance to avoid playing Zanie's.

Write Club
Last Tuesday of every month
7:00 p.m.
$8 at the door
writeclubrules.com

No one likes a boring literary reading, so why not add a bit of smackdown to the proceedings? The Hideout regularly hosts this verbal battle, whereby two writers are assigned two opposing themes, and are given seven minutes to make the most of the given topic. Egos, ink, and the paper upon which they rest are routinely bruised for audience amusement. Finally, the proceeds go to charity.

Not sure how it's possible to straddle a bike and dance at the same time, but it will no doubt happen en masse when the classic 1964 concert film T.A.M.I. Show screens at The Hideout on May 13. Marvin Gaye, Smokey Robinson, Jan and Dean, James Brown and the Rolling Stones will provide the jams, The Hideout will provide the beers, and the groovers will roll up on bikes to dig this night of R&B cool.

Various dates
$8 at the door

For four-plus years, The Interview Show has provided an unlikely live forum for Chicago-based talk courtesy of host Mark Bazer. The show has hosted such local and global celebrities as Brian Dennehy, Rick Kogan, Kid Sister, Tavi Gevinson, Charlie Trotter and John Mahoney. Keep an eye on the Hideout website for the next lineup of random famousness.

Hideout dance parties happen every Saturday night, starting at around midnight in the same space where the bands perform. The parties usually have rotating themes and guest DJs and are uniformly great times. Cover is minimal, though dance partiers must wait until the end of whatever live show happens to be on stage that night.

Ann Torralba, aka "Little Miss Ann," plays upbeat folk music with a positive message for the kids, along with supporting act Future Hits, aka CPS teacher (and Chicago indie rock veteran) Matt Baron. The Hideout's charms are not for adults only, so load up the minivan and introduce the brood to a fun, wholesome and special experience in the kind of pleasantly odd place they don't see everyday.

Looking for more events and venues to initiate the kiddies into a Rock & Roll lifestyle? Check out our Kids' Concert Venues page!

Last year The Hideout celebrated its 15th annual Block Party. The late summer celebration of all things Hideout has hosted acts such as Mavis Staples, Andrew Bird, Neko Case, Bloc Party (of course), The Frames and the many manifestations of Jon Langford, and seems to get bigger every year. Indeed, last year's fest had some challenges with lengthy late-afternoon beer lines and long-empty food trucks, but the performances were stellar, and the venue's greatness was nary diminished. Check the website for announcements on this year's party, which will likely happen in September.

Greg Wahl is a Chicagoan who counts The Hideout as one of his many strategically-placed places to hide among the camouflage of fun people.
Thanks for reading CBS NEWS.
Create your free account or log in
for more features.