(CBS) What started as a seemingly fantasized Twitter exchange ended in a self-fulfilling prophecy.

Back on Jan. 7, 2012 -- likely while watching Lions' quarterback Matthew Stafford connect with Calvin Johnson 12 times for 211 yards and two touchdowns in a 45-28 loss to the Saints in the wild-card round -- Brandon Marshall tweeted:

Most chalked up the exchange as nothing more than banter between two former teammates with an unspoken bond reminiscing about their glory days together.

Five days prior to that tweet, the Bears had fired general manager Jerry Angelo. Twenty-one days later, they hired Phil Emery to take over that post. And 45 days after being hired, Emery's first move in free agency was acquiring Marshall from the Miami Dolphins for a 2012 and 2013 third-round draft pick. Two years, two months and six days after stealing Marshall, the Bears rewarded him with a three-year contract extension that may allow him to end his career in Chicago.

With Jay Cutler inked for the next seven seasons and also likely to end his career as a Bear, the dynamic duo has a chance to turn that trust into their first playoff appearance together.

For Bears fans, the hope is much more.

Since arriving in Chicago, Marshall has matured both as a player and person. A champion of the mental health community -- he pledged to donate $1 million of his new contract to that field -- and his craft. Let's focus on the latter and analyze Marshall's maturation on the field.

Marshall is the antithesis to the stereotype that wide receivers are prima donnas who only want to catch the ball. He's evolved into one of the league's premier run blockers on the perimeter.

Run blocking for a receiver is want-to, attitude and effort. Take this example from the Bears-Lions game in Detroit.

The Bears line up in 21 personnel in a pony (two tailback) backfield, with Marshall (circled in yellow) flanked to the right.

The Bears run a "flip" pitch, designed to take advantage of teams who crash the edge instead of playing contain. Cutler pivots from under center, giving a quick belly fake to the up-back (Michael Bush), only to pitch the ball out to Matt Forte to the field side, with room to run on the perimeter. 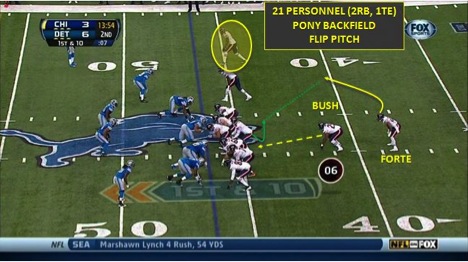 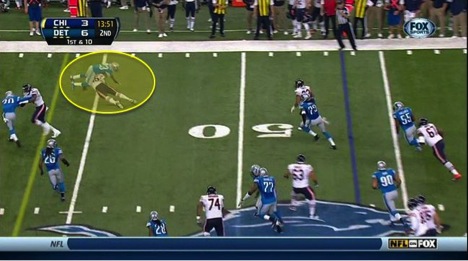 Fellow wideout Alshon Jeffery seals the inside to create an alley for Forte to burst through on his way to the end zone. 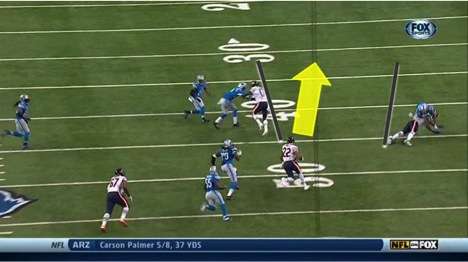 This is just one of many examples of Marshall erasing his blocking assignment down the field to pave the way for explosive runs.

Winning in the five-yard bump area

Because defensive backs are allowed to make contact (or "chuck") with receivers within five yards of the line of scrimmage, this area has turned into a battle zone.

When cornerbacks choose to press or bump-and-run with receivers, they are attempting to get a good jam off the line of scrimmage to re-route the receiver and disrupt the timing of the play enough to allow the pass rush to get to the quarterback.

Bumping Marshall is a risky proposition for cornerbacks.

Not only is Marshall typically bigger and stronger than most corners, he's become a master of the push-and-pull technique on his release to gain separation, leverage or stack the cornerback.

Here's an example from the Browns game against All-Pro cornerback Joe Haden, who is lined up in press coverage. However, Marshall is the aggressor in this engagement, as he strikes Haden with both hands off his release to gain control. 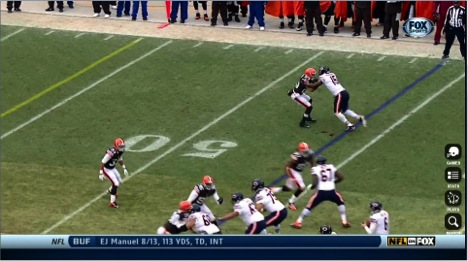 Marshall presses Haden off his body, then uses that momentum and force to swing Haden back behind him and gain inside leverage on his release. 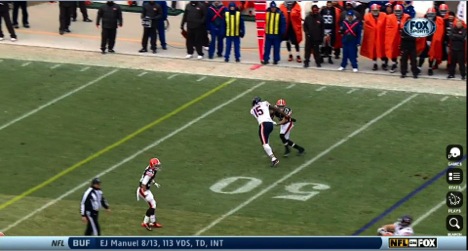 By gaining inside leverage, Marshall is able to shield Haden from the ball with his body and high-point the 50/50 ball on a 41-yard reception. 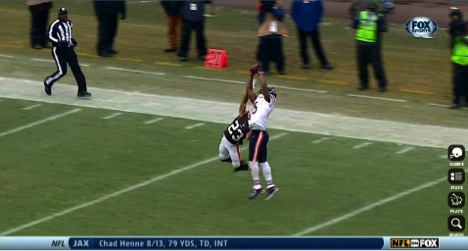 Unless the receiver gets too much of a defensive back's jersey or face mask, you'll rarely see a penalty go against the receiver. There's an example of this technique being used from Marshall in virtually every game, in which he uses his physicality and savvy to get vertical against corners attempting to press him. 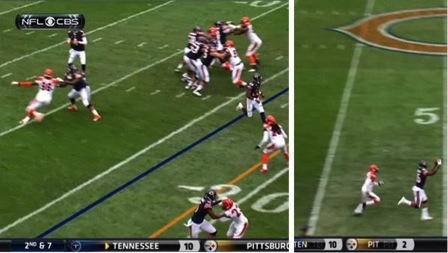 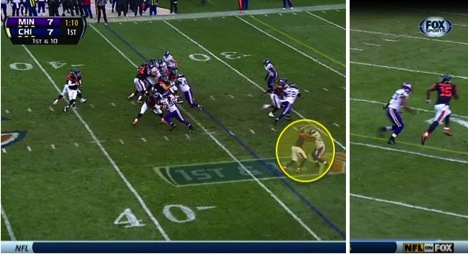 In their Denver days, Cutler and Marshall connected on a lot of deep passes over the top, keyed off of the Broncos' play-action package. Safeties would pursue downhill to support against the inside and outside zone runs, while Cutler would keep the ball, break contain and make deep throws on the move.

The Bears still have movement and play-action packages under Marc Trestman, but these two have evolved in their pre- and post-snap technique and coverage reads and adjustments for every package and scenario.

Here, the Bears are inside the 5-yard line, lined up in 11 personnel with Marshall split to the right, matched up against Tramon Williams, who is playing off-man coverage. 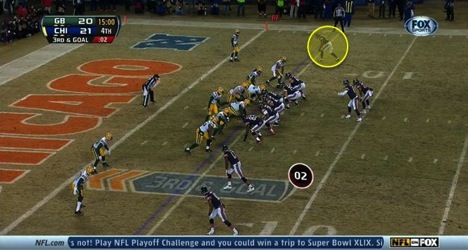 Marshall initially runs a hitch route at the goal line, but with the Packers in 0 coverage (no safety help over the top), Cutler throws a fade to the back corner of the end zone. 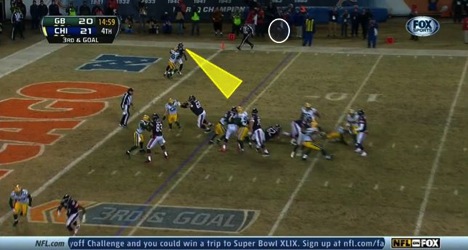 Marshall is able to make a quick adjustment to spin 180 degrees, to stack on top of Williams, locate the ball and secure the touchdown in the back of the end zone. 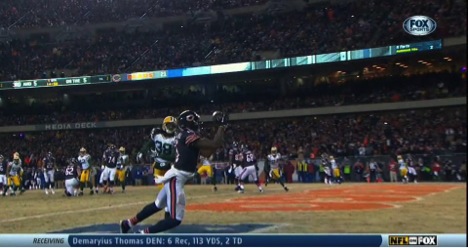 This is an example of a play that's only possible through years of experience and trust.

Statistically, Marshall's career numbers are staggering. He has five 100-plus-catch seasons, seven straight 1,000-yard seasons and 57 career receiving touchdowns, which works out to a score every 12 receptions. Marshall isn't a burner, rather a physical mismatch with excellent body control, a keen feel for coverage and deft sleight of hand to separate from cornerbacks.

Given how he successfully predicted the future once already, perhaps Bears fans should start lobbying for tweets about a Super Bowl trophy.