CHICAGO (CBS) -- After missing the past two City Council meetings, Ald. Carrie Austin (34th) announced Monday she has COVID-19, but is "progressing toward full recovery."

Austin is the first elected city official to be diagnosed with the virus. Illinois Attorney General Kwame Raoul also tested positive for COVID-19 last month, and has since returned to work.

Austin, the second longest-serving member of the City Council, announced her coronavirus diagnosis in a letter to constituents in her ward, which includes parts of the Morgan Park, Roseland, Washington Heights and West Pullman neighborhoods on the Far South Side.

"Giving wholly praise and honor to God for His unwavering grace and mercy, I greet you all in peaceful spirits. Just want to drop a short health check update and let you know I'm doing well," Austin wrote. "For your information, I have been stricken by COVID 19 and am currently progressing toward full recovery." 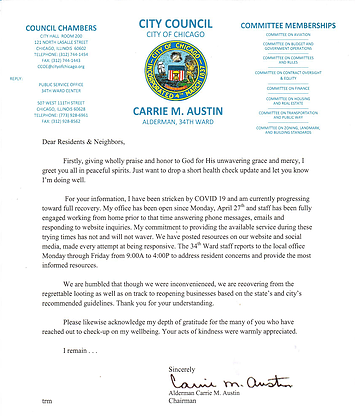 According to the letter, Austin's staff is working from her Ward office to respond to requests for service, and is updating the ward's website and social media pages.

"We are humbled that though we were inconvenienced, we are recovering from the regrettable looting as well as on track to reopening businesses based on the state and city's recommended guidelines. Thank you for your understanding," Austin wrote. "Please likewise acknowledge my depth of gratitude for the many of you who have reached out to check on my well being. Your acts of kindness were warmly appreciated."

The letter does not indicate how long Austin has been battling the virus, but she missed City Council meetings in May and June, and was absent last week for a meeting of the Committee on Contracting Oversight and Equity, which she chairs. The committee's vice chair, Ald. David Moore (17th) ran that meeting, and asked colleagues to extend their prayers to Austin.

During the May 20th City Council meeting, Ald. Jason Ervin (28th) said Austin was at home recuperating, after being in the hospital, but didn't mention COVID.

"Let's keep her in our prayers, and reach out to her, and just let her know that we are thinking about her," Ervin said at the time.

Austin has served on the City Council since 1994, when Mayor Richard M. Daley appointed her to fill the seat of her late husband, Lemuel Austin, who had died of a heart attack. She was elected to her first full term in 1995.

The FBI raided her ward office in June 2019, but she has insisted she's done nothing wrong, and has not been charged with a crime.