CHICAGO (CBS) -- Boarded up windows, locked doors, and posted closed signs are everywhere as non-essential businesses across Chicago and the state were forced to shut down to help stop the spread of COVID-19. Now some of those businesses are having massive layoffs and may never reopen.

There are 194 locations and 88 businesses and organization that plan to lay off more than 14,000 employees.

"It's a real gut punch. It's the pain on the ground of people losing wages," said Andrew Challenger of Challenger, Gray and Christmas, an outplacement firm headquartered in Chicago.

The hospitality industry is the hardest hit. Nineteen hotels in the state announced layoffs, including Trump tower where nearly 300 workers will lose their jobs.

"That's in line with what we're seeing across the country," Challenger said. 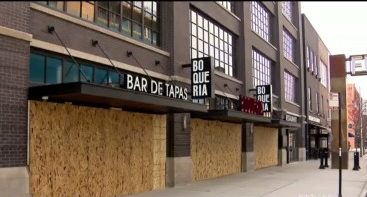 "Those businesses are often under capitalized, low margins. They cannot provide much of a safety net to employees when revenues drop off for even a week," Challenger said.

But no industry is spared. The list also includes social organizations like the YMCA, medical offices, doctors, dentists‚ and even manufacturing companies. Forty percent of the businesses say the layoffs are temporary.

"In those cases employers are making the decision to keep people on benefits. They may still get health care, they may have access to insurance, and they'll be able to return quickly to work if demand rebounds," Challenger said.

The rest are permanent‚ meaning the employers will not pay any benefits, and if the owners decide to reopen, they'll have to hire new staffers.

The trend could continue into April and May, Challenger said.

If there is any hope of stopping the downward spiral, Challenger says it's  the $2 trillion stimulus package that can Americans buy groceries and pay rent and provide economic relief to businesses.