ESPN/ABC is coming under fire this week after using a split screen during the nail-biting end of the Indy 500 showing Helio Castroneves’ galpal Adriana Henoa instead of the race. He, um, ultimately lost by the way. So that got us thinking which NASCAR Drivers have WAGs who are split screen worthy? Here's our list.

Castroneves’ baby mama started the controversy and who can blame the producers for wanting to feast their eyes on this beauty? Next time, perhaps they should wait until after her husband wins the race.

Introducing Beccy Hunter-Reay.  Her husband Ryan actually won the Indy 500 and frankly I’m not exactly sure why she didn’t get the screen time Adriana did. Something tells me we’ll be seeing more of her in the future.

And Anna de Ferran is another nubile young lady I suspect we’ll be seeing more of. The aspiring pop star whose daddy Gil is in the racecar biz is currently making time with Indy rookie Sage Karam. The 19-year old made it to the finals of the Cab Day Pit stop competition and the top of our list for hot girlfriends.

It takes one hell of a woman to date a man after Sports Illustrated Swimsuit Model Marissa Miller has already had at ‘em. But Reimann captured Dale Earnhardt Jr.’s heart more than five years ago and he hasn’t model jumped since.  I guess it doesn’t hurt she’s not exactly difficult to look at.

Casey Mears’ gal pal turned wife is not only easy on the eyes she plays a mean guitar hero.

In the subtlety beautiful department I present you Ryan Newman’s wife Krissie. This one’s an all-natural beauty.  In a world where big hair and big, well other things reign, ya gotta love that.

NASCAR legend Jeff Gordon decided to go the model route when he wifed up Ingrid Vandebosch.  And really, with a superstar career like his, can you blame him for choosing this stunner to mother his children?

Six-time champion Jimmie Johnson also went the model route when he married the Oklahoma woman he affectionately calls “Chani.” She also dabbled in acting and now runs her husband’s foundation.

Denny Hamlin met his baby momma – a former Charlotte Bobcats Cheerleader – at a game back in 2007. According to USA Today they didn’t officially start dating until months later when Fish contacted Hamlin about sponsoring her for the Miss South Carolina USA pageant.  Ah, so that’s how it’s done.

That’s Dr. Downey to you.  Not only did Carl Edwards hit the jackpot with his wife Kate in the looks department – this gorgeous gal has brains too.  Kate works with patients who have severe brain trauma. Clearly, Carl’s faculties are all working just fine. 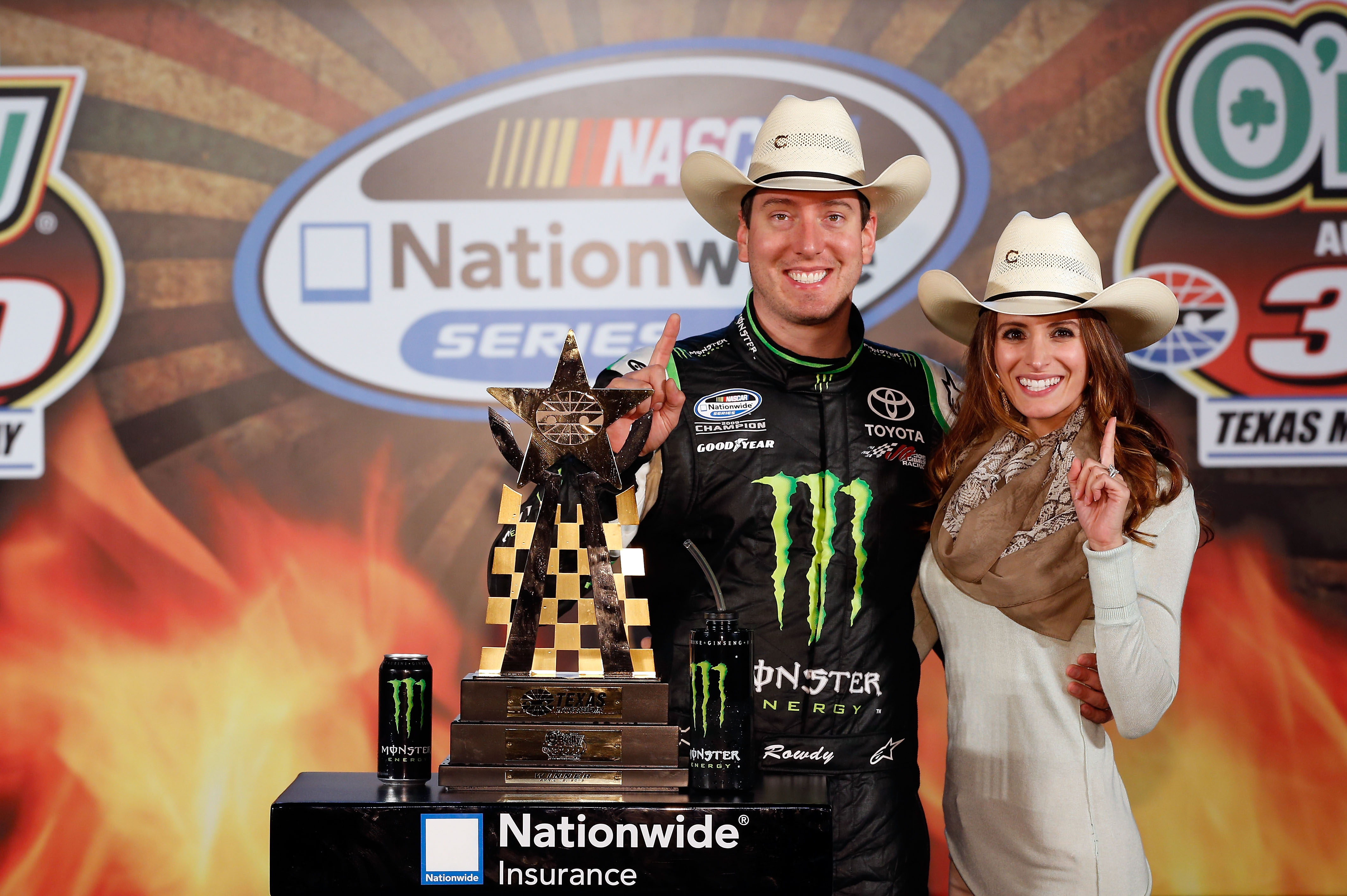 I admit, this one is a head-scratcher.  I mean Kyle Busch is way out of his league here. Yes, her face is stunning – but her body is out of control. Samantha also has a lifestyle and fitness blog. It’s obvious she practices what she preaches. Did I mention she’s a voracious philanthropist?

Kurt Busch’s girlfriend his a package deal in more ways than one. This gorgeous blonde babe has a young son who Busch has bonded with and her day job is as the Executive Director of the Armed Forces Foundation.

Sherry met beau Martin Truex Jr. while working for a sports marketing company.  But it’s not all NASCAR all the time for Pollex.  She owns a boutique in North Carolina and like many other racing WAGs helped Truex start a foundation.

The newly minted Mrs. Clint Bowyer must be one special lady. She has put up with her husband’s notoriously less-than-romantic antics. And now, they are expecting their first child.

Yes, she is a racecar driver herself – but she’s also the girlfriend of driver Ricky Stenhouse Jr. Stenhouse hit the jackpot, not only does she know how to start an engine, she’s also a bikini model.

Don't forget to check out our NASCAR Power Rankings.

Who did I leave out?  Let me know e-mail me at tara.lipinsky@cbs.com or send me a Tweet @TaraLipinsky.