BALTIMORE (WJZ) -- Baltimore has seen so much pain, with more than 1,500 people killed in the past five years. More than half of those killings remain unsolved.

WJZ, in collaboration with CBS News, is examining a crime often going without punishment in our country. The national homicide clearance rate is at an all-time low, according to FBI data. In the mid-1960s more than 90% of murders were solved, generally resulting in an arrest. By 1990, the percentage fell into the 60's. Then, by 2020, as the number of homicides surged, the national clearance rate dropped to about 50% for the first time ever. 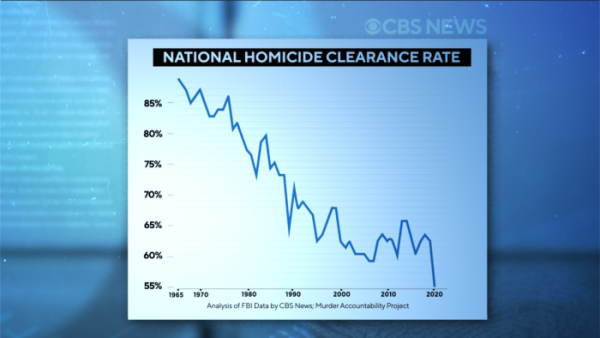 Our analysis with CBS News also discovered differences by race. The national homicide rate for white victims keeps improving. The rate of solving murders for Black and Hispanic victims is much lower. 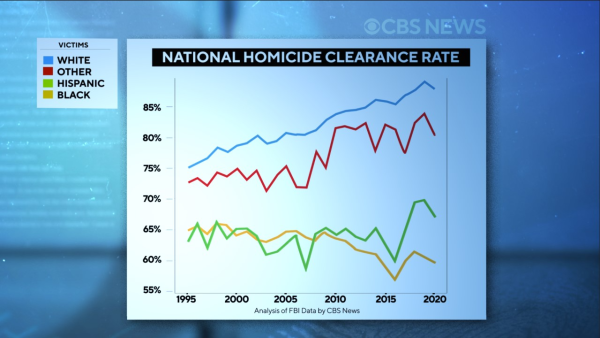 "I will never forget that day," Cunningham said. "The guy they were shooting at got shot in his hip. He got shot in his head. Markell will never be forgotten. Never. He was just a sweet kid, and he just lost his life trying to come home from school."

A memorial plaque sits in her front yard, and Cunningham wonders if the killer will ever be brought to justice.

"My grandson's case has not been solved. I don't even believe that the detective is working on the case because I've called them on so many occasions and never get a phone call back… Still haven't gotten my grandson's belongings and you know, three years? What are you still holding onto it for?"

Cunningham said she is frustrated when she cannot get a detective to pick up the phone or call her back, "That's your job... What's so much more frustrating -- it seems that nobody cares," she said.

Cunningham is not alone in waiting for answers. A CBS News analysis of FBI homicide data shows Baltimore City's average clearance rate from 2015 to 2019 was just 38.7%, hitting a low of 29.7% in 2015, the tumultuous year when Freddie Gray was killed in police custody and arrests plummeted. 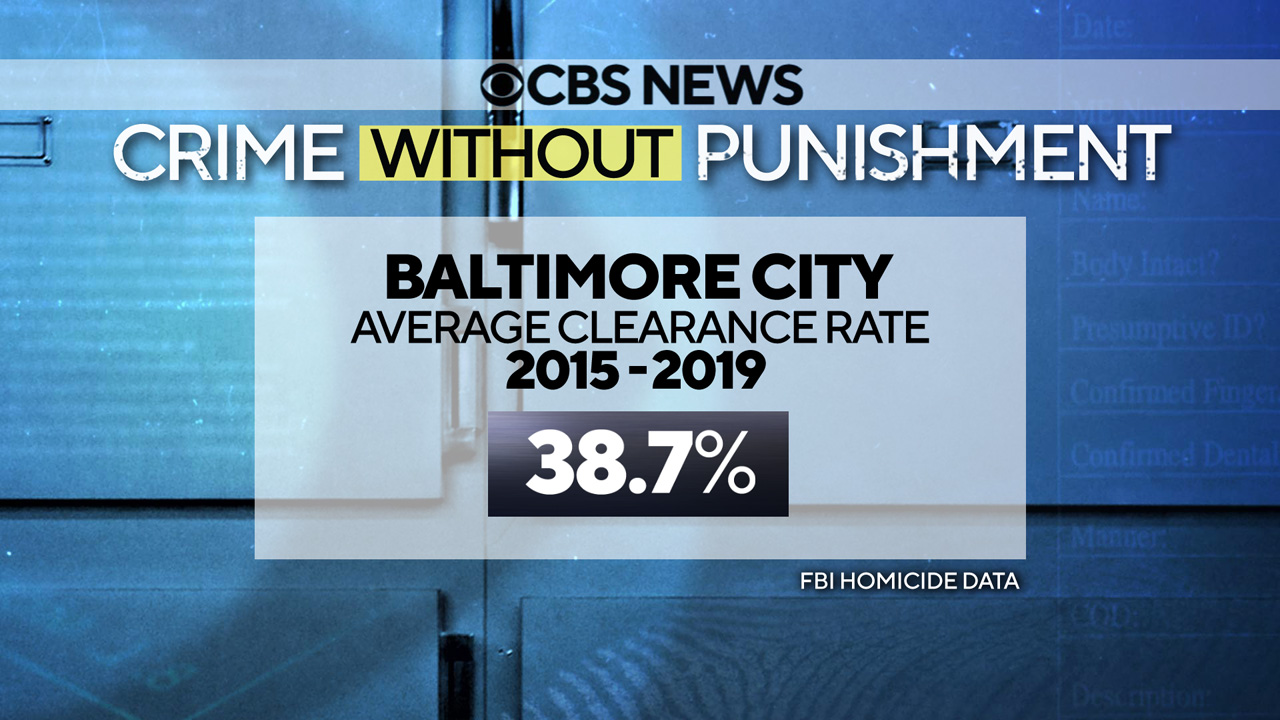 So far this year, it's around 42% and remains below national averages.

Cunningham said that is a sad reality for many loved ones like her.

Shooters face "no consequences for their actions. They look at police like they're a joke," she said.

CBS News also looked at the number of homicides solved based on race and found, nationally, while the clearance rate improved for white victims, it fell for homicides involving Black and Hispanic victims.

In Baltimore City, the number of cleared homicides involving white victims has been higher than that for Black victims every year -- except one -- since 1995.

In 2016, only 11% of homicides involving Black victims were solved compared to 35.7% for white victims.

We asked the Baltimore police commissioner, "Why the disparity?"

"Here in Baltimore with over 90% of our victims being African Americans, we have an incredibly large case load, as you know. …We're not working any harder or less hard on any specific case. We give 100% on all of them, but some of them have nuances to them that bring us directly to the perpetrator right away," Commissioner Michael Harrison said.

In Baltimore, a number of homicides are cleared by what the law enforcement calls "exceptional" means, some because the suspect has died.

One example is the 2016 killing of up-and-coming rapper Lor Scoota. His alleged killer was gunned down in his vehicle just a few months later.

"It's important to us that we solve them because that is how we send a message to the community and would-be offenders that you will not get away with it," Harrison said. "When we solve them and we hold people accountable, that's the greatest deterrent of all."

Police also have to deal with a culture where witnesses are often scared to talk.

In 2002, the Dawson family -- including five children --was killed in their East Baltimore home in retaliation for calling police on a drug dealer.

And the infamous 2007 "Stop Snitching" video brought the underground message of witness intimidation into public view.

The commissioner said a new initiative to add civilians to the department will help relieve the pressure on detectives and bring justice to more families of homicide victims.

We asked Gov. Larry Hogan about why so many killings go unsolved.

Baltimore prosecutors have secured 41 homicide convictions so far in 2022, according to data from the Baltimore City State's Attorney's Office.

During the two previous years, when the court system was hampered by the pandemic, there were 29 and 20 murder convictions in 2021 and 2020, respectively.

In 2019, before COVID, there were 86 homicide convictions, according to the state's attorney's office.

Cunningham may not have justice for her grandson yet, but she's honoring his memory -- and those of other homicide victims -- with a memorial garden planted on a vacant lot obtained from the city.

She promises she'll never give up.

"I'm not going away. It might be 10 years, but I'm not going away and I'm going to still keep calling you," she said.  "So you might as well respond to me. … We are always going to hurt because he's gone, but if you could get the individual who did it, we'd at least have some closure."

Complete coverage of "Crime Without Punishment' from our CBS stations across the country and CBS News is available here.

Extended Coverage: Homicide Clearance Rates Are Declining Across The US. Baltimore's Is Down To 42%