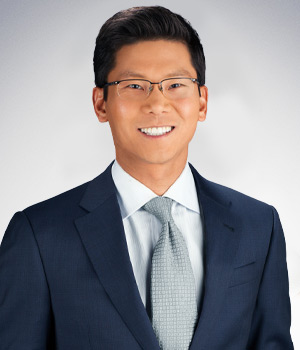 When Kenny Choi jumped into the backseat, he never thought he would be introducing his ride share driver to National Public Radio. The hour-long ride to the airport turned into a conversation that included politics, the economic divide, and the cultural differences between the East Coast and the West Coast.

"The driver who usually listened to music said he felt more informed because of the news we heard and then discussed," remembers Choi. "It seemed like a transformative moment for him and that made me proud to be a journalist."

Kenny is committed to being an engaging and credible source for news.

"It's important to me that people get good information and that's what I strive to do every day at work," he says.

Kenny was raised in New Haven, Conn. His parents, who are teachers, moved around a lot so he got to discover various communities.

In high school, he performed in a barbershop quartet and sang bass in a highly competitive a cappella group. He also enjoyed playing all sports. "I like being outdoors and I've always been the type that gets involved in various activities. Basketball, surfing, cycling, tennis. It's just my way of being active and appreciating nature."

When it was time to attend college he sought a warmer climate and headed to Los Angeles.

While majoring in Communication Studies at UCLA, Kenny worked for the Daily Bruin newspaper and for The Bruin News, the local news station for the UCLA community.

He continued to meld his love of sports with his passion for writing. He got a sports internship at KCAL 9 where he was able to interview top sports figures like Kobe Bryant, Shaquille O'Neal, and Phil Jackson.

His career started as a passion for sports before he pivoted to news. "Whether it's sports or news, I'm always looking for that compelling angle," he says.

He eventually took a job at Sports Net New York as an anchor and reporter.

In 2010, Kenny joined KITV in Honolulu, first as part of the morning news before becoming a primary anchor for the 6pm and 10pm newscasts.

Kenny has always been involved with his community. He worked with the Special Olympics, the Boys and Girls Club, and other organizations. He served on the American Lung Association of Hawaii's Council and is also a member of the Asian American Journalists Association.

Kenny joined KPIX 5 in April 2016 as morning and noon co-anchor. He tries to be asleep by 8pm so that he can be at the station by 3:30am to prepare for the 4:30am newscast.

"I love my job because I have the opportunity to learn something every day and to share that information," he says. "There are countless news sources now and it's imperative to provide Bay Area viewers with what they need to know to get their day started."

In his spare time, Kenny enjoys surfing at Ocean Beach, cycling in the Marin Headlands and hiking in Yosemite. He's also eager to discover new and unusual foods around the Bay Area.

He and his family live in San Francisco.