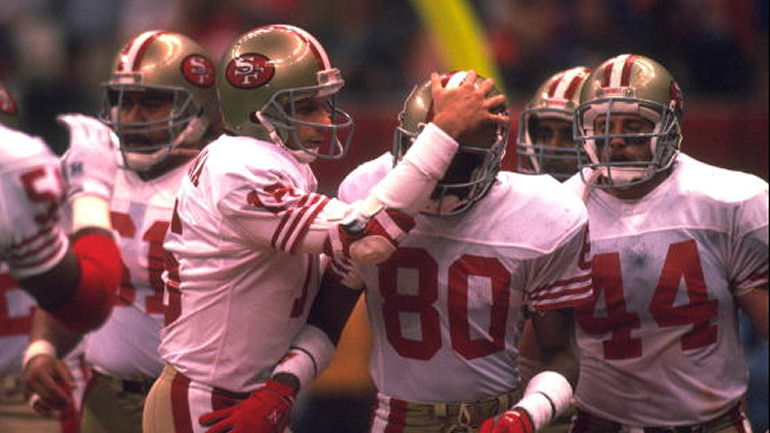 The 49ers postseason legacy continues to grow after the last-second Wild Card victory in frigid Green Bay last week. Was it one of the greatest postseason win in team history? As the 49ers set out on the Quest for Six (championships), we look back at the greatest red and gold wins in playoff history.

What looked like a showdown between two of the greatest quarterbacks in a generation turned into one of the most lopsided games in Super Bowl history as Joe Montana's 49ers shredded John Elway's Denver Broncos in a 55-10 blowout at the Louisiana Superdome. The game was never really in doubt as the 49ers led 27-3 at halftime, and continued piling up points in the second half. The victory for head coach George Seifert was the first championship for the team in the post Bill Walsh era. Montana becme the first player to win the league Most Valuable Player as well as Super Bowl MVP in the same season.

Amid some of the most frigid temperatures in NFL history, the Colin Kaepernick and the Niners drove the field late and iced the wild card round game at historic Lambeau Field on Phil Dawson's 33-yard field goal as time expired for a 23-20 win over the Green Bay Packers.

During the opening round of the 2002 season playoffs, the NFC West champion 49ers fell behind 38-14 to Kerry Collins, Tiki Barber and the visiting New York Giants. What followed was one of the greatest comebacks in NFL playoff history. Quarterback Jeff Garcia put on a clinic, running for 60 yards and throwing for more than 330, along with three scores. In all the team put up 25 unanswered points in the second half. The Giants had a shot to put the game away, but a botched field goal snap by Trey Junkin, recently signed out of retirement, left the 49ers with a 39-38 win.

After dropping consecutive NFC Championship games to the Dallas Cowboys, some were saying Steve Young would never get the 49ers back to the big game. With a little help in the form of three turnovers from the defense, Young put those thoughts to rest in a 38-28 win in what would prove to be the final title game match-up in the rivalry of the decade. The team would go on to romp over the San Diego Chargers in Super Bowl XXIX.

Vernon Davis' catch late in the 4th quarter, on a route dubbed the "Vernon Post," gave the 49ers their first playoff victory in nine years and sent them to their first NFC title game in 14 years with a 36-32 win over the New Orleans Saints in the divisional playoffs. The game featured three lead changes in the final 2 minutes and 30 seconds, and proved to be the high point of Alex Smith's career in red and gold

Traveling to face the heavily favored Vikings in freezing Minnesota, the 49ers faced long odd to secure their first NFL-era playoff victory,  but quarterback John Brodie lead the Niners to 17 unanswered points, including the clinching touchdown, a 1-yard run, with just over a minute left to put the squad in the playoff win column with a 17-14 win.

No list of great 49er moments would be complete with out mentioning the victory that made San Francisco a title town. The game itself lacked the drama of that season's NFC Championship game, in fact the 49ers shut down Cincinnati 20-0 in the first half before holding off a second half comeback, but the game secured the 49ers and game MVP Joe Montana as part of the national sports consciousness after the 26-21 win.

In your head this game is probably better known as the "Owens, Owens, Owens," game after the memorable call from Joe Starkey. The game ended with Terrell Owens pulling in a 25-yard touchdown pass from quarterback Steve Young catch with three seconds left in the game, lifting the 49ers to a 30-27 win over the Green Bay Packers in the NFC Wild Card playoff.

According to legend, with the 49ers trailing the Bengals 13-16 with just over three minutes remaining in Super Bowl XXIII, Montana huddled the team inside the 10 yard line before casually pointing out "there's John Candy" in the stands behind the end zone. With just seconds left, Montana hit John Taylor for the game winner, locking up the team's second Super Bowl title 20-16.

You knew this one. It was the play that launched a dynasty: Joe Montana rolled right and Dwight Clark reached toward the heavens to make The Catch, probably the single most famous moment in Bay Area sports history as the 49ers defeated the Dallas Cowboys 28-27 in the NFC Championship game.